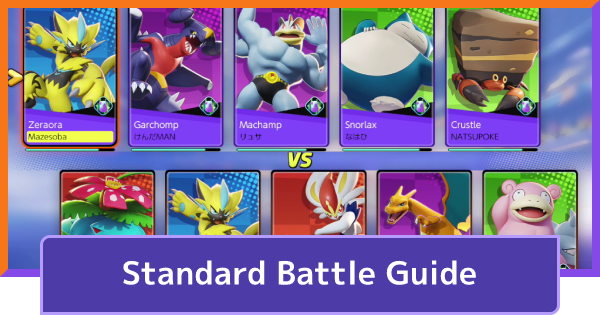 The Standard Battle Mode is the main game mode in Pokemon Unite. Its format features two teams of 5 players battling within a 10-minute period to gain the most points. It's the same format used in Ranked Matches.

Can Be Played With Other Players Or CPU

Players have the option to choose who they play against. They can either play with friends, random players, or CPU. This allows you to practice and try out their skills for the Standard Battle.

VS Bots - How To Play CPU Match

Standard Battles have a match duration of 10 minutes each. This gives players time to score goals, which is the basis of which team wins at the end of the match.

Currently Only Has One Map

The BETA version of the game only featured a single map for Standard Battles. The Remoat Map features 5 goals for each team and a central area where the boss Pokemon would spawn.

Before the match starts, you will be selecting which Pokemon to use. Choose between Pokemon you've unlocked or the week's free Pokemon.

Cannot Have The Same Pokemon In A Team

A team can only have 1 of each Pokemon in a team. Use chat to communicate with your team, such as discussing which roles to play or which Pokemon to use.

Remember to choose the Battle Item & Held Items for your Pokemon before starting the match. You can do this by tapping "Battle Preparation". These items are essential to get the most out of your Pokemon.

After each team member is ready or the 1 minute Pokemon selection time is finished, the match will begin automatically. You can see the Pokemon of both teams on the loading screen.

1. Divide Team Members Into Each Route

At the start of the battle, each team member should proceed to their specific lanes and defeat the Wild Pokemon that they encounter. Defeat wild Pokemon to gain Aeos Energy Points and EXP.

Once you've leveled up for a bit, head to one of the goals and score with the points you've collected. If an enemy is near the goal, either attempt to KO them or wait for them to leave their designated goals.

Scoring Guide & How To Score Points

You can also fight the opposing Pokemon to either remove obstacles that keep your team away from scoring a goal or to defend your own goal. If you KO'd the enemy Pokemon, you will get EXP points and you will be able to receive or drop your opponents' Aeos Energy Points. If you're KO'd, you will respawn later in your base.

Cycle between defeating Wild Pokemon and heading to Goals to score. If an opponent team heads to any of your team scores, defend it to prevent them from scoring.

Use Jump Pads To Get Around Maps Quickly

There are multiple Jump Pads that you can utilize to move around the map quickly. 4 regular Jump Pads can be found around the central area of the map and one Super Jump pad will spawn on your base during the 5-minute mark of the match!

Boss Pokemon Rotom & Drednaw will spawn at the upper and lower areas of every map. They are stronger than other Wild Pokemon but they will provide a buff to the whole team when captured, so try to battle them with two or more players to ensure success.

Prioritizing Drednaw will cause your team to gain the EXP lead that can be used as an advantage against your opponents. Try to immediately group up and capture it after spawning. It's ideal for at least one player from the top lane to rotate the bottom during this time as well.

On your last 2 minutes, the Legendary Boss Pokemon Zapdos will show up in the middle of the map. Capturing it will stop the charging time for scoring goals for a fixed time and it will also deal with damage to your opponents.

Scores Double On The Final Stretch

Scores will double on the last 2 minutes of the match. This is a great chance to flip your odds at winning, so do your best to score at the goal during the final stretch. That being said, don't forget to look for Zapdos as well.