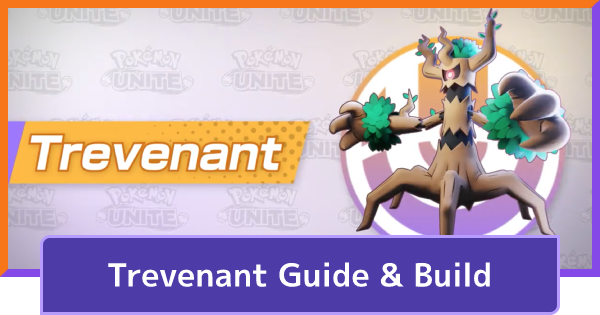 Trevenant Is Coming To Pokemon Unite!

It looks like a new "woody" character is coming to Pokemon Unite: Trevenant! The Defenders are definitely branching out this year as Trevenant is expected to join them this January. The official Twitter account of Pokemon UNITE just posted a teaser indicating Trevenant's upcoming appearance in the Battle Arena! Trevenant's tree-mendous moves were also previewed. Take it or leaf it Trevenant's release date is January 19 or 20 depending on your time zone.

Please take note that these are based off from previous release times in the game. The official time has not yet been announced, so stay tuned for updates regarding this!

Trevenant Is A Defender!

Looks like our newest Trevenant Pokemon is a Defender hoping to protect its allies in battle! Very apt for the sturdy-looking trunk that it possesses!

Based on its prior appearances and history, here's an outline of Trevenant's evolution. As a result, we may anticipate Trevenant to evolve sooner than other Defenders, who must evolve three times to reach their final form. Trevenant may be able to access its complete moveset and Unite Move earlier making it a huge advantage in the game.

Trevenant's Unite License cost, like the rest of the previously released Pokemon characters in Pokemon Unite, is likely to be kept undisclosed until it is published in the game. Stay tuned for further information on how much this ghostly Pokemon may cost you!

This section has basic tips and tricks that you must know to effectively control Trevenant. Treat this as a supplement to the Beginner's Guide.

We'll update this section as soon as Trevenant gets released! Stay tuned for updates!

Lane Guide
Which Lane Should You Go To?

Trevenant is said to be vulnerable to fire and ice. When lumberjacks enter the forest, they often bring Fire-types with them to counteract incoming attacks, which Trevenant despises. So when playing with Trevenant, keep an eye out for Alolan Ninetales' chilly Blizzard and fiery Pokemon with burn damage like Charizard or Cinderace!

Trevenant On The New Meta

It's fantastic that our team of Pokemon Defenders is expanding! With Trevenant joining Pokemon UNITE, there will undoubtedly be a shift in the current meta builds, particularly in rank battles. Let's see whether we see Trevenant in a lot of games in the following weeks!

Based on the video, we can say that Trevenant appears to be a potential A-type Defender, for the time being, however, this might alter after we get a look and test it in the UNITE Arena.

Trevenant's moves might be based on prior abilities it has demonstrated during its previous Pokemon adventures. We're thrilled to see what it can offer to Aeos Island's Battle Arena!

Trevenant seems to have both ranged and melee moves that it can use in battle. There's no news on its passive yet but we can assume that this might be correlated with nature-like or phantom abilities since Trevenant is also known as a Ghostly Pokemon.

Trevenant's Ability to Heal Its Own HP

Trevenant's latest update shows it ability to heal its own HP during battle! It's comparable to Greedent, another Defender who can recover by eating berries. You can also see how its hammer-like move was able to deal damage on its enemy Pikachu in the sneak peak video. With such an, it's not hard to imagine that this tree's trunk is bound to be extra tanky!

Trevenant's initial move appears to be tied to a wild Pokemon based on the trailer. This move is similar to Slowbro's Amnesia in some ways, however, we don't know if it has debuffing effects or how much damage it causes when used on enemies. We will update this as soon as possible once this move is available in Pokemon UNITE.

Trevenant appears to have a  dash attack, as seen by the second clip. Trevenant may be seen rushing towards Lucario, a speedster-type Pokemon, in the center lane. This appears to be a promising move that Trevenant can utilize as an escape tactic or catch up to fleeing opponents. Trevenant can roam around the lanes by dashing with this move.

Based on the third clip on the trailer, Trevenant gets aggressive as he creates a translucent hammer-like weapon from its energy and uses it to smash its enemy Lucario! It appears to deliver a significant amount of damage, albeit there is a little delay at the start, giving more agile opponents enough time to dodge. It appears that a little experience is required to perform this hammer attack on targets precisely.

Trevenant seems to summon a beam from the sky, which strikes its unlucky target, Pikachu, featured in the final minutes of the trailer. By the looks of it, this move is a sure hit! Could this be Trevenant's Forest Curse? We're excited to know more about this! Stay tuned for updates on Trevenant's Unite Move as we will fill in more details once it is officially released!

※This section is a work in progress. We will include the full details once Trevenant's moves are available. Please stay tuned for updates!

Currently there's no news if Trevenant will have a Holowear available upon its release so stay tuned for upcoming news on skins on the following days! You can check out all the available Pokemon Holowear on the link below for possible skins Trevenant may have!

All Pokemon Skins & Holowear List - Price & How To Unlock