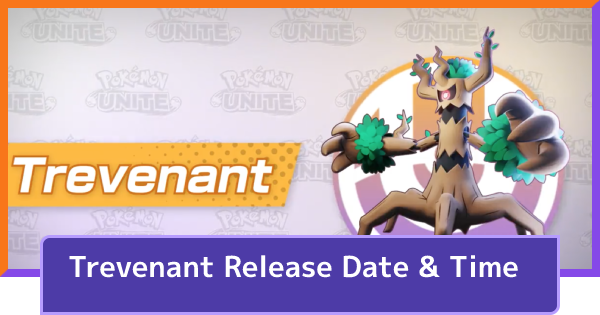 Trevenant Has Planted Its Roots! New!

A new "trunky" (ahem - we mean tanky!) character is now available in Pokemon Unite: Trevenant! The Defenders are definitely branching out this year as Trevenant is expected to join them this January. Get ready to see Trevenant's tree-mendous moves in battle! Take it or leaf it as Trevenant's Unite License is now available for purchase at the shop!

Trevenant is priced at 10,000 Coins or 575 Gems at the shop! Smash your enemy with all your might with this newest Pokemon by purchasing its Unite License!

Trevenant Is A Defender

Looks like our newest Trevenant Pokemon is a Defender hoping to protect its allies in battle! Very apt for the sturdy-looking trunk that it possesses! Trevenant may play as a viable roaming defender with its dashing attack moves. This makes it possible to play in the jungle area during the early at mid-stages so it can evolve quickly.

Trevenant On The New Meta

It's great that our roster of Pokemon Defenders is growing! With Trevenant coming into Pokemon UNITE there's surely going to be a change in the current meta builds especially on rank matches. Let's see if we will see Trevenant often in matchups these coming days!

We can assume for now, based on the video, that Trevenant seems like a promising A-type Defender although this could change once we get a feel of it in the UNITE Arena.

Looks To Be A Dashing HP Recoverer

Based on the videos about Trevenant so far, we were able to gather a lot of information on the kinds of possible movesets and Unite Moves it has in store for us in the game! It seems to have several elements from current Defenders and some elements that make it unique in the roster. Read more to see learn what we can presume based on the information we have so far!

Trevenant's most recent update demonstrates its ability to restore its own HP throughout fighting! It's quite similar to Greedent, a fellow Defender who can also heal by eating berries. In the sneak peek video, you can also see how its hammer-like attack was able to deliver damage to its opponent Pikachu. With abilities like that, we can imagine that this tree's trunk is bound to be extra tanky!

As per watching the short video clip, Pikachu receives a halo after being stunned by Trevenant's move. This impact lasted for a few seconds, preventing Pikachu from moving. This animation is considerably different from the typical stars that emerge whenever a Pokemon is incapacitated.

Leaf marks may be seen sprouting from Pikachu's head for a short period of time during its Unite Move duration. This might be a hint that Pikachu has been cursed. It appears to have triggered extra healing effects as well as increased Trevenant's movement speed.

If you look attentively frame by frame, you can see that Trevenant loses some of its HP when it uses its Wooden Hammer-like move to boost its damage. This might be comparable to how Crustle trades part of its protection for increased speed with Shell Smash.

It is possible that Trevenant will get its moves based on the previous abilities it has shown on its Pokemon adventures. We're excited to see what it can bring to the Battle Arena in Aeos Island!

Based on the trailer, Trevenant's first move seems to be linked to a wild Pokemon. This move is somehow similar to Slowbro's Amnesia although we are not sure if this has debuffing effects or the damage it deals when used on targets yet.

It seems Trevenant has a dashing attack as featured on the second clip. You can see Trevenant charging towards Lucario, a speedster-type of Pokemon, in the central lane. This looks like a promising move that Trevenant can use as an escape tool or for catching up on fleeing enemies. Trevenant can probably roam around by dashing with this move

Trevenant gets aggressive as he creates a translucent hammer-like weapon from its energy and uses it to smash its enemy Lucario! It looks like it deals a hefty amount of damage although we can notice a short delay at the start, enough time that more nimble enemies can dodge. It looks like a little practice is needed to perfectly execute this hammer attack on targets.

Trevenant seems to call forth a beam from the sky and hit its unfortunate target, which is Pikachu looks of it! Could this be Forest Curse?

To be more effective in battle, we can focus on enhancing Trevenant's abilities and strengths with Battle Items and Held Items. As a Defender-type of Pokemon, Trevenant has an insane amount of endurance compared to other mons and may outlive its enemies on the battlefield.

Check out other optimized builds, including its best movesets, held items, and battle items to equip with it in our new Trevenant Build article below!

What Kind Of Pokemon Is Trevenant?

Here's an overview of Trevenant's evolution based on its previous appearances and history. So we can expect that Trevenant may have an early evolution compared to other Defenders that need to evolve thrice to get its Final form. Because of this, Trevenant may be able to access its entire moveset and Unite Move sooner in the game, giving it a significant advantage.

Trevenant is mostly known as a ghostly Pokemon and is described as resembling a shadowy slender brown tree introduced in Generation VI. It's feared as a ghost of the forest and people fear it due to a belief that it devours anyone who try to cut down trees in its forest.

Can Control Other Trees

Small roots that grow from the tips of this Pokemon's feet may connect to the forest's trees, giving Trevenant authority over them. Through this, it exerts control over other trees and uses them to defend the forest from enemies.

Protector Of The Forest

Trevenant can control trees at will. Although it is friendly in nature, it can get aggressive against its enemies particularly people who harm the forest. Trevenant has the ability to control other trees by acting as a nerve system through its roots. It will curse anyone who chops down trees and will use this ability to capture those who do illegal activities within the forest. It is, nevertheless, incredibly nice to the forest creatures and small Pokemon that reside in its body.

Lumberjacks bring along Fire-types when they enter the forest, which Trevenant hates. Trevenant is known to be weak against Fire and Ice so you better watch out for Alolan Ninetales' icy Blizzard and fiery Pokemon like Charizard or Cinderace with their burn damage!