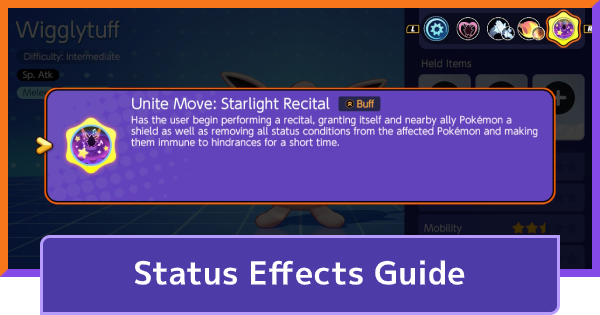 Pokemon moves deal with an abnormal status effect in Pokemon Unite (Pokemon MOBA). This guide explains what are the different status effects, how to cure them, & more.

Negative Effects Due To Moves

Status effects occur when hit by an enhanced attack, a move with a special effect, or specific passive abilities. Pokemon that receive a certain ailment will get negative effects that may decrease their HP, decrease movement speed, or make them unable to move.

How To Cure Status Effects

Wait Until The Effect Is Over

All abnormal conditions have a specific duration effect. The status effects will be cured if you wait for the condition to expire. This is the only way to cure if you do not have Full Heal equipped or a supporter ally.

Equipping Full Heal as a Battle Item helps to cure any status effect a Pokemon has. This can be obtained as a reward when reaching level 14. This is a must item for trainers who wants to cure status effects fast.

There are Pokemon moves that specialize in curing status effects. A supporter can use these moves on themselves if they are affected by an abnormal condition or use the move on their allies to help cure their status effect.

Wigglytuff's Unite Move "Starlight Recital" helps cure status ailments and grants a shield to itself and a nearby ally. You can ask to be cured if you have Wigglytuff as an ally.

Blissey's Safeguard move also helps an ally to cure status effects while providing a shield. This can be used multiple times as this is not a Unite Move, unlike Wigglytuff's Starlight Recital.

Although your HP and status both reset when returned to the base, it's not worth getting KO'd to do this, as your opponents receive EXP and additional Aeos Energy that they can use to score your goal if you are the only one defending it.

The affected Pokemon is covered in a purple effect that indicates it is poisoned. While this is in effect, the Pokemon receives damage every 0.5 seconds.

When in burned state, the affected Pokemon is covered in fire. While this is in effect, the Pokemon's attack decreased and receives damage every 0.75 seconds

The affected Pokemon is covered with a static charge effect that slows down their movement for a while.

※Snorlax's sleepy state from yawn has a different effect than the other 2 Pokemon.