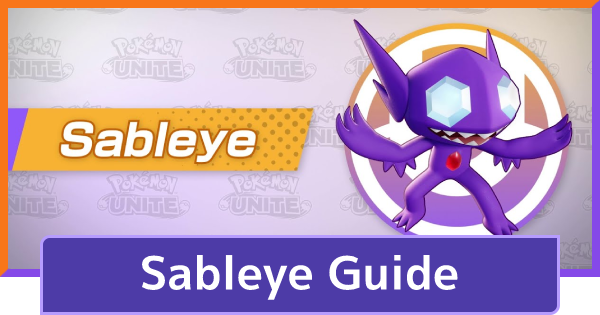 Sableye Spawns From The Shadows (New!)

Watch out for the shadows as Sableye is ready to gank its opponents in Unite with its arrival this November 16! Check out our guide below to learn more about its hidden powers and how you can wield them in the battlefield!

Recommended Sableye Boost Emblems are 6 white boost emblems with atleast +4% HP each. For the remaining 4 slots, it is recommended to use blue and brown medals that can further increase HP.

At the start you will be prompted to choose between two of your initial moves. Although Astonish has slightly more damage, you might want to choose Thief as it gives you more flexibility with dashes and lower cooldown.

As a Support, you won't need to last hit enemies. Instead, you should try to focus on distracting the enemy. Make movements to distract enemies right before a Wild Pokemon spawns, though make sure not to be KO'd in the process!

Aside from stunning enemies, you can steal a small amount of their Aeos energy with Thief if this move hits an opponent without having to defeat them first. Use it to gain Aeos energy faster and score more increasing your team's chance of winning!

Take Note Of Your Position

Make sure that you take advantage of ranged moves like Astonish with wide area of effect when the opposing team gathers to inflict multiple enemies at once while also slowing them down.

Sableye excels in one-on-one battles but struggles when stunned and attacked from several directions. If you're at a disadvantage, don't push Sableye to battle alone. Instead, keep delivering pressure from a distance and let your lane partner, preferably an attacker, to do the most damage.

Remain unseen from your opponents with Sableye's passive, Prankster! You can use this to sneak past the enemy lines to score or steal wild Pokemon. It's also a good escape tool against pursuers at the same time you can use it to gank at squishies.

Adapt Your Build To Your Gameplay

Once you reach level 4, you will have to upgrade your first move between the Knock Off and Shadow Sneak. Take note that this will have an impact on the combo you are going for. If you want to get more stealthy you may opt for Shadow Sneak and launch surprise attacks on your opponents while dealing additional damage. When disrupting is more of your playstyle, then go for Knock Off to aggressively stun enemies .

Use Sableye's abilities to distract or disrupt opponents and assist in wiping out Wild Pokemon. At this point, your team will be in constant fight with the opposing teams, so begin to be more aggressive by using your stealthy skills and debuffs to take on Regieleki or Rayquaza depending on your lane.

Complete Your Combo With Your Second Move!

At Level 6, you get to choose your second move on either Feint Attack which you can use to play tricks with dummy Aeos energy to unsuspected victims or inflict enemies with Confuse Ray so that they start attacking nearby random Pokemon. Which ever you choose, make sure that it complements your first move.

Sableye may use dummy Aeos Energy and place them at certain locations to spy on the enemy team as well as deal damage over time to unsuspecting opposing Pokemon that picks it up.

Use Confuse Ray When Outnumbered

When your team is struggling against the opposing team on map objectives, you can use Confuse Ray to turn them against one another, creating havoc and preventing their team strategize for a brief period of time. You might also use this when you and your lane partner is outnumbered to gain a temporary ally from the enemy team to inflict additional damage.

Help your team steal the last hit from the wild boss Pokemon by using Chaos Glower to send back enemies back to their base while preventing low HP opponents already recalling from escaping, all while dealing damage on the side. This move can be a game changer that can turn the tables so use it strategically. Make sure to use it with moves like Confuse Ray to further disrupt the enemy team.

Pokemon Sableye Is Weak Against

How To Play Against Sableye

Pokemon Sableye Is Strong Against

Tips When Allied With Sableye