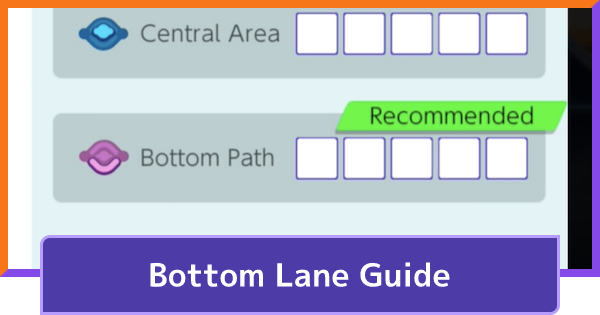 The bottom lane can be very challenging in Pokemon Unite. Read this guide to improve playing and winning in the bot lane, positioning, tactics, strategies and useful tips, & more!

Things To Know As A Bot Laner

As a bottom laner, the early game is mostly about efficiently gaining EXP for the latter parts of the game. Drednaw plays an important role as defeating it can slowly push the scales to your side.

As with the early parts of the game, the middle and end phases are about gaining as much of an advantage as you can. The main objective is to push the enemy's lane so that they can't effectively contest Drednaw. Drednaw and Zapdos can be particular spots where the match can be decided, making them extremely important.

KO Wild Pokemon In The Lane

First thing to do is to clear all Wild Pokemon in the top lane. Most of the Pokemon residing within the lanes are the same for both top and bottom. The similarities end near the front-most goal, with the top having Aipoms while the bottom lane has Audinos.

Both the top and bottom lanes start and proceed the same. Locations of Wild Pokemon are initially mirrored. However, the placement of obstacles, the bushes, and spawns is a bit different.

KO The Audino In The Middle

A lone Audino spawns just above the bush above the bottom lane. With it located just in the middle, it is highly likely that the enemy team would also contest it. EXP is rewarded only to the team that lands the killing blow. After this Audino is defeated, head to the other Audinos.

Use The Bushes Effectively

You can make good use of the nearby bush to take out the Audino mentioned above. Pokemon hiding in bushes are invisible to the enemy team. Use this to swoop in and take the last hit.

At exactly the 9-minute mark, several Corphishes will spawn just behind the front-most goal. You and another team member can take them, but doing so leaves your goal undefended. Instead, just assign one person to take it and another to stand guard to prevent goals.

3 Combees and 1 Vespiquen spawn at exactly the 8:50 mark in the center of the top lane. As this is a very likely spot for a clash, always prepare your moves to secure a KO. Keep watch on your HP and recover at your goal if need be.

Use Moves To KO Wild Pokemon

When contesting the Combees and the Vespiquen, be mindful of their remaining HP. If you can secure a clean last hit with your move, do so! Note that you need to know how much damage your skill does at your current level for this to be effective.

After dealing with the Combees and the Vespiquen, another spawn wave of Audinos and Corphishes should appear near the front goal. KO them for more EXP and Aeos Energy.

When Is A Good Time To Attack The Enemy?

When competing for a Wild Pokemon, allow the enemy team to damage the Wild Pokemon first. This places the Wild Pokemon's aggro on them - with the combination of your attacks, you may have a chance KO an enemy Pokemon. In the top lane, the Combee and Vespiquen spawn location is a good spot for a clash.

Ask For Your Jungler's Help

The Jungler (mid laner) can visit the top lane to increase your chances of winning a clash through sheer numbers. Use the mini-map to view the location of your Jungler and coordinate an attack. On the other hand, make sure you're careful of the enemy team's Jungler.

Once the clock hits 7:20, both the top and bottom lanes each spawn 3 Combees and a Vespiquen. Getting these Pokemon can give you a large advantage in terms of EXP, so try to contest them the moment they spawn. You can ask your Jungler for help if you find it hard to get in due to enemy pressure.

During the fight for the Combees and Vespiquen, pressure the enemy team by damaging their Wild Pokemon. You can even try to interact with the ones nearest to their goals. If done well, this can pressure them to either commit or defend. Without these Pokemon, it can be very easy to enter the bushes from their side, making the Drednaw fight easier.

At the 7-minute mark, Drednaw spawns at the bottom lane. Co-operate with your team to take it down as its benefits are significant. Note that the team that hits Drednaw last gets the buffs and EXP. To have a higher chance, reserve your moves and use it to land the last hit on Drednaw once its HP reaches a critical point.

How To Beat Drednaw As A Bot Laner

If your team is successful in defeating Drednaw, you can then proceed to pressure and clear the enemy's bottom goal. This helps a lot in the long run as it can be hard for the enemy team to contest Drednaw later as their goal and recovery area is farther from it.

As it is expected to have more team battles during this phase, be proactive and look for on-going team fights to assist your teammates. Should the top lane be a likely spot for a clash, head there and be prepared. If you think that the bottom lane is in danger, stay and defend.

If You Fail To KO Drednaw

Failing to KO Drednaw leaves you and your team at a disadvantage due to the EXP bonus gained by the enemy team. If you charge head-on to a clash during this time, the likelihood of you winning is low. Seek out Wild Pokemon on your side to lessen the gap. If your front-most goals are destroyed, farm EXP by taking down the nearby Audinos.

Defeat Rotom Then Prepare For Drednaw

Should you succeed in defeating Rotom, you can take this opportunity for a counterattack. The enemy team would likely send some forces to defend the top lane, leaving their bottom lane vulnerable to attack. Go to the bottom goal and destroy it to slow down enemy reinforcements in the next Drednaw spawn.

Prepare For The Drednaw Fight Again

If defeated, Drednaw will spawn again after 2 minutes. Check your mini-map for Drednaw's respawn time and converge at the bottom lane 10 to 20 seconds before Drednaw spawns. Prepare for the fight by eliminating all Wild Pokemon in the top lane for experience points.

Save Your Unite Move

Don't lose hope or panic during this time as there is still ample time left to make a comeback. Gather your wits and look for possible weak points in the enemy team to exploit.

If you and your team were able to defeat Drednaw 2 times without any problems, you can try and contest it for the 3rd and last time. Reserve your Unite Moves for Zapdos later, as that is likely to be the clash that decides the outcome of the match.

When winning, do not let the enemy team score a goal. On the other hand, when losing, keep on the pressure and try to score with whatever you can. Note that goals are doubled during the last 2 minutes. Take note of Pokemon that have a large amount of Aeos Energy, be they friend or foe.

Use The Mini-Map To Check Pokemon With Aeos Energy

You can use the mini-map to pinpoint enemy Pokemon that carry a large amount of Aeos Energy. Pokemon that have numbers displayed on them have large quantities. Prioritize these targets and use their Aeos Energy to score.

Spawns In The Bottom Lane

Drednaw spawns once the timer hits the 7-minute mark. Defeating it rewards all team members with EXP and a temporary shield. Drednaw can be pretty difficult to defeat as it has a couple of hard-hitting crowd control moves. Given that, fight it with at least 2 Pokemon. Be aware of your surroundings when battling it as the enemy team can swoop in and take the kill!

With only 2 minutes remaining, Zapdos spawns in the middle of the arena. The effects for defeating it can greatly increase your chances of winning the match. Try to get close and prepare to fight it once it spawns.