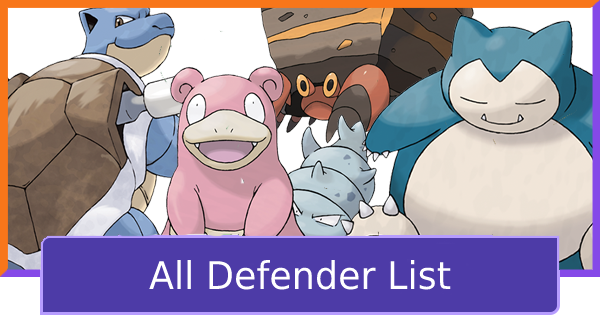 Trevenant Has Planted Its Roots!

A new "trunky" (ahem - we mean tanky!) character is now available in Pokemon Unite: Trevenant! The Defenders are definitely branching out this year as Trevenant is expected to join them this January. Get ready to see Trevenant's tree-mendous moves in battle! Take it or leaf it as Trevenant's Unite License is now available for purchase at the shop!

These are the actual Lv15 stats for all Defender-type Pokemon without any Held Items equipped.

Defenders will need to be the shield of the team, absorbing plenty of damage to support your teammates. Unsurprisingly, this means that they need to be able to withstand damage & moves! Focus on Def & HP as priority for this role.

Defenders need to be able to respond to debuffs or crowd controls for them to effectively tank for their team. Full Heal can work well in most situations while Eject Button can help with positioning, but be aware that it has a slightly longer cooldown.

Defender Role - Lanes & How To Play

Defenders should take the top or bottom lane based on which lane the attacker goes to. However, if the supporter or all-rounder decides to go with an attacker, go to another lane.

Which Wild Pokemon To Attack In The Top Lane

In the top lane we highly suggest that you go for these Wild Pokemon first. Focus on getting Corphish 4th and denying the enemy team any potential exp from it. Then return to get the top left Aipom.

Which Wild Pokemon To Attack In The Bottom Lane

In the bottom lane we highly suggest that you go for these Wild Pokemon. Grab the central Audino first before the enemy team does to get a significant exp lead!

Pokemon With Tons Of HP & Defense

Defenders are bulky Pokemon with a high endurance stat that allows them to take a substantial beating. They can bear the heavier attacks of tough Wild Pokemon, and can secure precious seconds for the team to set up an attack during team fights. For example in the picture above, Crustle uses crowd control to disrupt Cinderance while tanking the other Pokemon.

Good At Stopping Enemies From Scoring

Defenders can sometimes hold a lane alone & prevent their opponents from scoring through harassment & crowd control. Strategic placement on the part of a defender can sometimes force opponents into the dilemma of wasting precious resources by trying to fight off an opponent that was designed to take damage. As staying in a goal helps recover HP and adds a shield, making a Defender in a goal very hard to uproot.

Another strength of Defenders is their powerful crowd control capabilities. Whether it's a stun, knockback, slow or immobilize, defenders can provide vital support to the team by preventing enemies from scoring, protecting teammates trying to score, covering retreats, or setting up for an ambush. Knowing when to deploy your moves is crucial for a defender's success.

Defenders have lower damage and might not be able to KO opponents alone. They are also slower when fighting Wild Pokemon on their own. Keep that in mind when you're defending lane on your own & make up for it by asking for help.

Apply Pressure By Closing In

Defenders are tasked with defending goals or allies. When in combat & you have the necessary support, apply pressure by closing in the distance against opponents to keep them away from key targets. If you are on your own however, then play defensively and don't overextend yourself.

How To Play & Tips

Pair With Attackers For Combat

Attackers are the complete opposite of Defenders, with high damage but low endurance. Cover each other's weaknesses by sticking together in combat & gain experience to level up as a team.