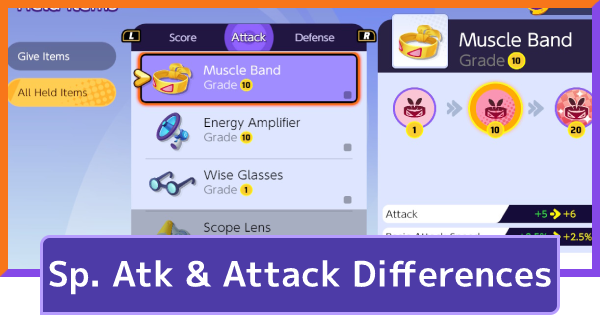 What is the difference between Special Attack and Attack in Pokemon Unite (Pokemon MOBA)? This guide includes Sp. Atk vs Atk effects, items, physical attacks.

Pokemon That Use The Attack Stat

Pokemon That Use The Special Attack Stat

※ The auto attack of Special Pokemon will be a physical attack. However, the boosted attack (usually the 3rd auto attack) will be Special.

Attack Type Is Fixed According To Each Pokemon

↑ Pokemon like Pikachu deal Special damage with their moves.

There are two types of attack stats in Pokemon Unite: Physical (just called "Attack") & Special Attack. The battle stat a Pokemon uses is unique to that Pokemon and can't be changed.

Charizard uses physical attack, while Venusaur uses special attack. If you were to equip a special attack boosting item on Charizard, its effect would go to waste. On Venusaur, however, it would improve the damage done by its moves. The key is to choose the right items for your Pokemon to ensure they're actually getting a benefit from them!

Although the effects of items will vary depending on a Pokemon's attack type, basic attacks are the same across the board: they are generally all physical. This means an item like the Muscle Band would raise their damage, even on a special attack user.

Normal attacks are generally all physical, but the third "powered-up" hit will change its type depending on the Pokemon. This means that although special attackers' regular basic attacks are physical, their final enhanced attack is special.

Special Attack & Attack - How To Increase

Some held items will provide you with attack or special attack stats. Ensure you're giving these to the right Pokemon to get the most benefit from them.

Note: Value in brackets is the stats obtained at item level 30.

Note: Value in brackets is the stats obtained at item level 30.