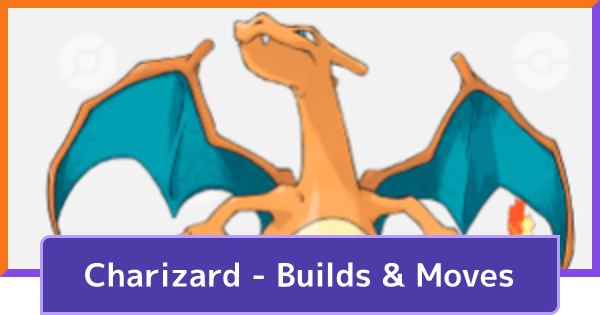 Charizard has gotten the updates from the patch. Fire Punch has received a bug fix, Flamethrower got an increase to movement speed, Fire Blast received a reduced cooldown, and finally Seismic slam has been reworked, effectively reversing how the move functions. Additionally, Charizard's unite move will now unfortunately charge somewhat slower.

Charizard has seen a lot of changes in the most recent patch, all of which are buffs! Flamethrower's cooldown was reduced from 7 to 5.5 seconds and Fire Blast's from 11 to 8. Additionally, the effects of Flamethrower, Fire Punch, and Fire Blast all saw a buff.

A popular combo among Charizard mains that throws you right smack into the heart of battle. Flare Blitz takes care of the issue of your lower defense stats by granting you a shield as you charge to attack. Fire Punch on the other hand deals a power-packed hit that both both shoves and burns enemies.

The items in this build give Charizard enough ammo to be more offensive especially later in the game. Muscle Band & Razor Claw both buff your attack, giving you the tools you need to deal powerful blows. Buddy Barrier ensures that your powerful ult not only deals damage to enemies but also grants you & your allies a shield in critical moments.

This build packs two of the most recently buffed moves from the last update into a lethal combo. You can use Fire Punch to shove opposing Pokemon to the Fire Blast area of damage. The compounded effect of these two moves can help with quick KOs.

This build gives Charizard an offensive kick as it maximizes attack and critical damage. You won't have much defense to rely on though, so make sure stick close to other teammates so that you won't take hard hits from Attackers.

One of Charizard's strengths is its ability to deal powerful ranged attacks, and Flamethrower is one of them. The distance not only provides ample opportunity to support allies by dealing extra damage to their opponents, but also gives you a chance to flee if the battle becomes too heated.

Although Fire Blast is great for dealing damage in a set area, most opponents in battle know better than to stay there once the flames start to show. Because of this, Flare Blitz is the more efficient move in battle as it not only inflicts considerable damage to opponents, but it also shields you in the process.

The items in this build give Charizard more room to utilize his moves. Muscle Band & Razor Claw both buff your attack, while Energy Amplifier ensures that your powerful ult can be used as many times as possible throughout the duration of the game.

Flamethrower is quite useful as it's deals damage from afar, burns Pokemon in the process, and increases your speed all in one go. The distance not only provides ample opportunity to support allies by dealing extra damage to their opponents, but also gives you a chance to flee if the battle becomes too heated.

Fire Blast is particularly useful in group battles as it targets all Pokemon in the area of effect. Aside from this, the damage dealt is comparatively higher then other moves, so it can be quite lethal if aimed well.

The muscle band & scope lens ensure that Charizard can deal powerful hits, so don't be afraid to go a bit more offensive on this build as it can really pack a punch!

Bottom Lane Is Recommended But Can Go Middle

You'll want to level up to Charizard as quickly as possible, so do make it a point to gain exp by fighting Wild Pokemon. We recommend the bottom lane for Charizard due to the abundance of Audino you can find there. Make sure to compete for last hits aggressively.

Although Fire Spin is a great, easy to use move, picking Flame Burst first is often the better choice. This is because opposing Pokemon don't really gather closely together in one area at the start, making Fire Spin a little bit more difficult to maneuver. Flame Burst however deals sure & powerful hits to the target Pokemon at a distance, making it a safer option for the earlier stages of the game.

Although you have a good balance of abilities, you will find that you'll be somewhat weak in the early game. Charizard is a Pokemon that evolves, and will thus hit its power spike later on. You'll want to choose your opponents wisely and not overextend. Contest wild Pokemon last hits, but don't overextend if your opponent is already a fully evolved Pokemon (Lucario, Pikachu, etc.)

Use Fire Spin To Speed Up KO's

When you get to Lv 3, you can start to use both Fire Spin and Flame Burst. This combo is particularly great at speeding up wild Pokemon KO's, so utilize it early in the game when EXP is a prime resource. Aim Fire Spin at your target to burn them where they stand, then hit them again with Flame Burst. When the wild Pokemon comes closer, lead them back into the ring of fire while attacking them simultaneously and watch them quickly get KO-ed.

Once you reach Lv5, you'll find your offensive capabilities improve enough to deal substantial damage to opposing Pokemon. You'll get a choice of two great offensive moves - making combat easier for you in general. Still, you won't have hit your maximum power spike yet, so you'll want to refrain from getting being too aggressive. Try to get yourself up to level 7 or 8 by the 7 minute mark.

At level 5 you'll get a choice between Flamethrower and Fire Punch. Which one you choose will affect the direction of your build, so pick wisely. Flamethrower is great for ranged battles, whereas Fire Punch brings a little bit more team versatility in the form of displacement.

Consider Fighting Over Escaping When HP Is Low

Thanks to your passive ability Blaze, your critical-hit rate increases when your HP is at half or less. When in a tight battle, consider fighting to finish off your opponent rather than running away. This can catch your opponent off-guard and result in you turning the tide!

Consider Saving Ult For Zapdos At 2:50

If you’re busy fighting off enemies, you may not have enough time to kill Wild Pokemon or score to reach 100% again by the time Zapdos appears. If this is mostly the case with you, we’d recommend that you consider saving your ult once the time stamp reaches 2:50. Having your ult for this final teamfight will be hugely advantageous.

This build provides more mobility than others, packing two dash moves. It will allow you to displace and burn your opponents while also giving yourself a shield. Of all the build variants, this one is closest in gameplay to a tank, so if your team is lacking in crowd control, try this one out!

This build is great for targeting several Pokemon at once. Utilize it in group battles or for when you want to KO several wild Pokemon quickly. Begin with aiming Fire Blast at your target group of enemy Pokemon and deal damage to all in the area. Stop them from moving away from the area or from coming towards you using Fire Punch. This combo leaves enemies in a circle of burning flames on the ground that both damages & slows them down.

This pair of moves will let you deal good damage but also be a bit more bulky via Flare Blitz's shield. Applying Flamethrower's burn and slow on enemies will also help to weaken them and potentially let you escape in a pinch.

Begin with aiming Fire Blast at your target enemy. This move usually works best when your opponent is rushing toward you rather than running away as it puts them in the perfect spot to get burned by the flames on the ground. Then follow with Flamethrower to burn them further and deal damage.

Arguably the main reason why Charizard is brought to matches, this enables you to slam your enemy to the ground, then fly up in the air to move freely over obstacles. It also increases your basic attack damage and burns enemies, all while recovering HP for every hit inflicted. Given this move's power, you'll want to consider making use of Ult-boosting items, such as the Energy Amplifier and Buddy Barrier. Pop the ult when you're low to get a big shield and damage boost. You will last longer than enemies anticipate, able to make huge comebacks.

Pokemon Charizard Is Weak Against

Pokemon Charizard Is Strong Against