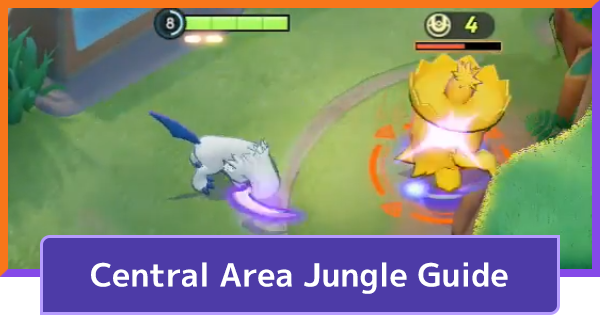 Check out this guide for the Jungle in Pokemon Unite (Pokemon MOBA). This guide includes what to do in the center lane jungle area, ganking, mid lane & buffs.

What To Do In The Center Lane

Five Things You Need To Know

This guide will go over the fundamentals you need to know to get started jungling in Pokemon Unite.

Click Here For 5 Techniques For Advanced Players To Improve

First Minute Of The Match

At the start of the match, first, take out the 5 Pokemon in the central area of your team's side. When you attack the Lillipup that appears at the beginning, it moves forward in the direction where Ludicolo appears, so follow it while attacking. KO them all and you'll reach level 5.

Pokemon to Knock Out In Order

When you defeat Ludicolo and Boufallant, a purple & orange aura will appear under your feet. This serves as a temporary power-up effect.

From 9 To 7 Minutes In A Match

Help Your Allies On the Top and Bottom Path

After you defeat the first five jungle Pokémon and have reached Level 5, no wild Pokémon will appear for a while. This will be your first opportunity to gank in either the top or bottom lanes.

Go To The Route Your Opponent Is Pushing

Look at the mini-map and decide which path you should take. We recommend that you take the path that your opponents are pushing. If your opponent is pushing, then they are far away from their goal zone and are overextended, making for a perfect opportunity to get a kill.

If one of your allies has been defeated very early and your opponent has gotten fed (is already higher level than you), it might be a better idea to avoid that lane. Try to find the lane where enemies are the lowest possible level.

Return To The Central Area & Get Buffs

Ludicolo and Boufallant will reappear one minute after they are KO'd. Break off from a battle so that you can get to the place where Ludicolo appears at 8:30. Note that Lillipup will not respawn - you can go for Ludicolo straight away.

Head To The Bottom Path Early

When the time has reached 7 minutes, Rotom will appear in the top and Drednaw will appear in the bottom. We recommend prioritizing Drednaw first, as it will give all team members not just experience but also shields for protection.

If You're At A Disadvantage, Defeat Other Wild Pokémon!

After defeating Drednaw, go to the top path next to attempt to defeat Rotom, which not only gives you +20 points, but also lets you insta-score on a goal that it reaches.

At around the 7:20 time mark, Vespiquen and Combee will reappear in the lower route. If you can KO them, you'll have an advantage against Drednaw since you'll have a difference in experience.

Two minutes after defeating Drednaw, the Pokemon will reappear. Make sure to check the mini-map for a timer that it will reappear again, and once that happens head over to bottom path 10-20 seconds in advance.

Save Your Unite Move For Drednaw

Drednaw may reappear if the first and second fights ended really quickly. Whatever you do, if your opponent uses a Unite move at this Drednaw fight, don't force yourself to use one as well since you'll be at a disadvantage in the Zapdos fight at the 2:00 time mark.

Defeat Zapdos To Gain The Advantage

When the time has reached the 2:00 mark, Zapdos will appear in the Legendary Pit. If your team was able to take it out, there's a good chance you can turn the match around and win. Just be careful not to let your opponent get the final blow!

If You're Winning, Don't Let Your Opponent's Score

When you're winning, be sure not to let your opponent score a goal. Defense will be key. When you're losing, however, you can afford to go all in and try to score. During the last minutes, the score is doubled, so it's absolutely vital to know which enemy (and ally) Pokemon are holding the most Aeos points.

Opponents with a high amount of Aeos Energy can be seen on the mini-map. The mini-map can be used this to determine which opponent you should KO first!

Get Behind Your Opponent

The trick to knocking out your opponent either going to the top or bottom route is to get behind them. Use the angles listed in the image above to approach your opponents to catch them off-guard.

Don't Face Your Opponent In Front

If you go head-on into an opponent's Pokémon, there is a chance that it will immediately notice you and run away. It is difficult to defeat an opponent who has fled to their goal zone, which can be difficult to KO.

Use Jump Pad In The Central Area

Using the jump pad in the central area, you can move over obstacles and into the grass. We highly recommended this as it makes it easier to get behind your opponent..

Hide In The Grass

While you're in the grass, your opponent can't see you even. This is the best way to do a sneak attack behind your opponents.

Use Junglers To Reach Master Rank

Jungling For The Win

We were able to reach the Master Rank using mostly Junglers. As they direct the flow of battle and control most of the clashes, playing as a Jungler is a great way to increase your rank. Also, ranked matches are the true tests of you abilities, try playing them once in a while!