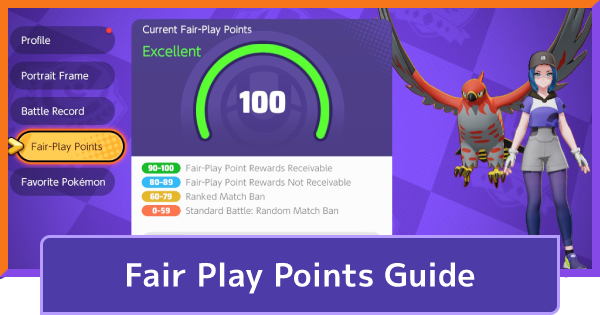 Fair Play Points is a sportsmanship points system in Pokemon Unite (Pokemon MOBA). Includes what are Fair Play Points, how to gain/regain & how to get fair play points back!

What Are Fair Play Points?

A Way To Ensure Sportsmanship

Fair Play Points are a system that encourages players to behave appropriately during matches. Keeping your score up will give you regular rewards while having it drop down will incur various penalties.

Can Be Monitored From Trainer Info Menu

Want to know the status of your Fair Play Points? You can easily check in the Fair Play Points tab of the Trainer Info menu. You can also get your Aeos Coin reward from there if you qualify for it.

How To Gain / Lose Points

Fair Play Points are deducted whenever a player leaves a match mid-way or when they are idle during the duration of it. This applies both to being disconnected & purposely leaving the game.

You may also lose points when you get Reported.

Players received Fair Play Points for completing either Standard or Ranked Matches. A point is also given to players who participate in standard CPU Matches!

Each player will have the maximum 100 Fair Play Points when they start their Pokemon Unite account. Since this is the ceiling, no points will be gained until the player loses Fair Play Points.

Players at the very top of the Fair-Play Points Rank will receive 20 Aeos Coins daily. Only players at this rank can receive this reward.

Can Still Play Against CPU

VS Bots - How To Play CPU Match