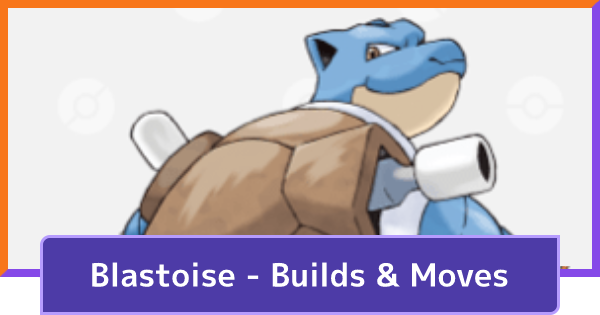 Blastoise received some major adjustments on the Oct 20th Patch, with its Hydro Pump damage being reduced, Water Spout's cooldown being reduced, and its Unite Move: Hydro Typhoon's damage being lowered. This constitutes quite a nerf to Blastoise's damage output, though its crowd control capabilities haven't been affected very much.

Blastoise has officially joined the fray on September 1st as the newest Defender in Pokemon Unite!

What Kind Of Pokemon Is Blastoise?

Blastoise is the fourth Defender Pokemon in the game, and has the capacity to displace and do crowd control - much like Snorlax.

Blastoise is tanky enough to be an effective Defender but also has an impressive moveset that packs a punch - providing for a lot of offensive potential.

Going for a Surf/Hydro Pump build will let you push around your enemies with impunity. The key to this build will be to effectively manage where you move your foes. Slamming an enemy into your team at an opportune time can lead to kills, but it can also get your team killed - use discretion when displacing enemies!

Blastoise's Unite move is an absolute powerhouse, so you'll want to save it for major objective battles, such as Drednaw and Zapdos. Pair it up with the Buddy Barrier to provide even more support for your team.

Final Item Is A Freebie

Although we recommend having Focus Band and Buddy Barrier in most cases, your final item in this build is a bit of a wildcard. If you want to increase damage, use Wise Glasses. If, however, you're comfortable with running a more aggressive scoring-oriented build, try out the Score Shield.

Rapid Spin is an ability that will change how your other moves (Hydro Pump or Water Spout) function. It will effectively make them into AoE attacks, and also increase their damage to boot. This build will provide you with a higher amount of overall team fight damage, at the cost of your displacement ability.

For players new to Blastoise, be careful - you can't activate your ult while you're spinning around! You'll have to toggle the Rapid Spin ability one more time to turn it off first.

Though a Defender, Blastoise deals significant damage that can't be ignored, making it a good candidate for the jungle. Leveling up fast will provide your team with significant advantages in later teamfights.

Your goal with this build will be to dominate the 7:00 Drednaw fight. Try to get level 7 so you can get your second ability and overpower other Pokemon in bottom. Winning this should give you a distinct advantage for the rest of the game.

Although unorthodox, given that Blastoise is a Special Attacker, it is possible to replace the Wise Glasses with Muscle Band, purely to help you clear the jungle faster and boost your early game.

Blastoise is a tank Pokemon & thus benefits when paired with a strong partner, particularly an Attacker. We recommend going top with the likes of Cinderace, Pikachu, Greninja, or any other attacker. However, Blastoise is crucial for teamfights so make sure to rotate bottom for the Drednaw fight at 7 minutes!

Blastoise's early days as Squirtle can be a bit rough. You will be very weak until you reach your level 5 power spike, so try to stick with your partner and last hit. Don't overcommit by jumping into the enemy with Skull Bash, as that can cause you to waste your Eject Button.

Use Water Gun To Prevent Scoring

Water Gun has a knockback effect to it - this is key for interrupting Pokemon that try to go for early goals to stack up their Attack Weight or Sp. Atk Specs.

At level 5 you'll get a bit of a power spike in the form of Hydro Pump and Water Spout. Although both moves have their use, we feel that Hydro Pump usually wins out in most cases, due to its powerful displacement abilities.

From the tests we've ran so far, it seems that Hydro Pump deals more or less damage depending on the range at which it strikes. Basically, the closer you are the more damage it will deal. It seems to have 3 possible damage ranges. Check out the button below for video examples of these ranges.

Hydro Pump will do its lowest (799) damage when only the very tip of the ability hits the target.

Mid-level damage occurs after the tip until about halfway down the range of the move.

Max damage occurs when you are very close to your target.

Blastoise really starts to shine once it gets access to its second upgraded move at level 7. In most cases, we recommend Surf as your second move, but there are a variety of possible builds you can experiment with.

If you choose Rapid Spin, make sure to read up on the different interactions it has with other moves listed below!

This build will let you push around foes like no other. You'll be able to ride on the wave you create, while also shoving opponents away. In hectic teamfights, this will allow you to reposition enemies so your allies can dispatch them easier.

Rapid Spin will alter the effects of your other moves, causing them to deal AoE damage coming from Blastoise's shell. This is a good way to deal more spread out damage to a whole team, but your overall single target damage will go down, so be careful.

Hold Water Sprout Down While Spinning

When in Rapid Spin, make sure you hold down your Water Spout button! Tapping it just once will stop the ability, but holding it down will let you channel it for a longer duration, dealing much more damage.

The effect of Hydro Pump will change when used in conjunction with Rapid Spin. You will now spray water around you, though you will retain the knockback effect. Like Water Sprout, this move's cooldown will be reset once you enter Rapid Spin. Unlike Water Sprout, however, you can't hold this move down while spinning!

Blastoise's Unite Move is an absolute powerhouse, dealing significant damage and throwing all Pokemon in the area. It is absolutely perfect for teamfights that occur around Zapdos and Drednaw, so you'll always want to make sure it's up for those occasions.

When Blastoise uses its powerful 3rd "boosted" basic attack, it will reduce the cooldown on its main abilities by about one second. This is a bit of hidden information that the game doesn't immediately tell you, but is very crucial for maximizing your play. Note that you don't even need to hit a target to trigger the cooldown reduction!

This section will teach you specific Wild Pokemon kill orders, as well as exactly what to do at various stages of the game. The timing guidelines here are for builds that use the middle lane.

Both Water Gun and Skull Bash inflict disables. You can use this to interrupt and prevent the stun attacks of both Ludicolo and Bouffalant to make farming them faster.

As a level 5 Pokemon, Blastoise's attack power is still not that great. When contesting the Combees and the Vespiquen, play safe and don't overextend.

Use the Rapid Spin and 1st move combo to devastate the enemy team and control the flow of the fight. Make good use of these moves and you'll probably end up defeating Drednaw too. If you find it hard to win the fight, use your Unite Move Hydro Typhoon as your last ace to get the last hit.

Once you reach level 9, you get to evolve to Blastoise and with it is a significant stat bump. As a Defender, go to the front lines and shield your teammates from enemy attacks. You can also make use of your Unite Move, Hydro Typhoon, to disable enemies for up to 2 seconds, enough time to change the course of a fight. Try to wait for the enemy team to gather around and use you Unite Move to win!

Pokemon Blastoise Is Weak Against

How To Play Against Blastoise

Pokemon Blastoise Is Strong Against