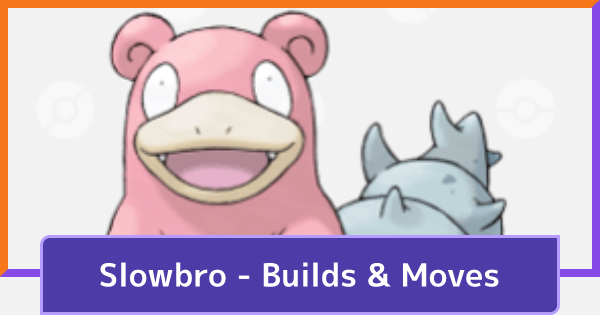 Slowbro received some adjustments on the Oct 20th Patch, with its Amnesia move getting a cooldown reduction and an HP recovery increase. This can be considered a decent buff for the Pokemon!

Slowbro has received some adjustments in the August 18th patch. Scald has seen a clear buff, and Surf saw a slight nerf in the length of the stun.

Play As A Support Tank

Slowbro's skills can heavily disrupt enemy movement during clashes. It also helps that it is innately tanky and has a lot of HP to boot. Take advantage of this and lead your teammates during clashes. Use Telekinesis or your Slowbeam to easily remove their damage dealer from play.

Although Scald is quite useful overall, the movement gained by Surf can be invaluable. Its AoE CC component is also invaluable in team fights. We feel that there's no competition here and that Surf should be your go-to ability in most games.

Amnesia will significantly improve your own personal bulk and survivability. Telekinesis can be viable if you're playing with a friend who is on a Speedster, as you can lock down targets and let your carry win easily. However, in most solo queue games, we recommend Amnesia.

Slowbro can hold its own during fights. If the enemy has a lot of crowd control skills to deal with, consider taking Amnesia instead of Telekinesis for a tankier alternative.

Surf Into The Fray

This build makes use of Slowbro's innate tankiness and the power of Amnesia and Surf. You get into the fight using Surf to throw off enemies, then cast Amnesia to nullify the opponent's moves, then use Surf again for additional damage. You can also use Surf to block enemies from the goal zones or tactically use it to gank.

You can nullify your opponents before they can deal damage with Amnesia and enhance Surf's damage when used accordingly. With its Held Items and Amnesia's buff, Surf can deal significant damage on any target. Slowbro also becomes immune to hindrances and gains increased Defense, you can opt to use it as an escape tool aside from Eject Button when needed.

This section has basic tips and tricks that you must know to effectively control Slowbro. Treat this as a supplement to the Beginner's Guide.

This section is for those looking to up their play with Slowbro. This is a supplement to the Advanced Players Guide.

Use your basic attack to harass Pokemon on the enemy team while taking out Wild Pokemon. Use Slack Off on cooldown to recover HP when needed. Utilize Slowpoke's long attack range harass enemies that try to close the gap. Always give the last hit to your lane partner as you are the designated Support/Tank of the team.

At level 4, Slowbro will need to determine its build going forward. If your team needs a defender, pick Surf. If your team is lacking in overall crowd control, choose Scald. Your choice will affect the direction of your build, so pick wisely. Also, start advancing toward the Drednaw or Rotom based on your lane.

You Can Use Surf To Escape

Aside from getting you into the thick of the fight, Surf can be used to run away from enemy pursuers. Aim it to the direction that you want to go to get jump a short distance.

How To Use Unite Move: Slowbeam

Slowbeam is Slowbro's Unite Move that unlocks once it reaches level 9. It basically ties down an enemy while granting Slowbro a shield & making it immune to enemy status ailments. Slowbeam is a more powerful version of Telekinesis so use it to bind and disable enemy attackers or support to cripple the enemy team!

Strategy Will Depend On Build

Your late-game strategy will depend on your build. If you go for the Defender (Surf + Amnesia) Build, your priorities should be guarding goals, as well as taking down Rotom, Drednaw or Zapdos. If you go for the Crowd Control (Scald + Telekinesis) Build, stick with your teammates to push or defend.

This build focuses on Slowbro's Amnesia move that creates a huge shield and closes in using Surf. Note that it's vital to use Amnesia before Surf as the former increases the latter's damage; flipping the order will waste Surf's potential damage increase. This is a stable defender build that can absorb huge amounts of damage and slow down several Pokemon at a wide range - though you won't be doing much damage on your own.

This build will focus on crowd control and harassing enemies. Disrupt enemy lines using Telekinesis while inflicting damage with Scald when opponents gets close. Beware that you'll lose a lot of defense power without Amnesia, so try not to push too hard.

This third build utilizes both Telekinesis and Surf. You can use this to quickly hold an enemy in place. Use Surf to initiate an attack, then quickly perform a Telekinesis to root an enemy. Be aware of your surroundings when initiating as using Telekinesis also disables Slowbros movement.

This section will teach you which specific Wild Pokemon to kill in order, as well as exactly what to do at various stages of the game. This guide is based on the Surf/Telekinesis Build!

Choose Water Gun as your first skill, make your way to the middle. While doing so, KO the Aipoms - once you've reached the 3rd & 4th Aipom you can attack them both with Water Gun. Since you're a Defender, try to give the last hit to your allies.

If you haven't reached level 4 yet, try to avoid attacking enemies and farm instead. Once you've reached level 4 you'll evolve into Slowbro and learn Surf. We recommend attacking aggressively at this point. Also, when using Slack Off you'll be defenseless, so make sure to use it when at your goal zone or in the grass.

Surf is a dash attack which stuns & reduces movement speed of opponents. In the battle against Drednaw, use Surf to create an opportunity for your allies to attack. Also, if your opponent is running low on HP, use Telekinesis to catch them and prevent them from escaping.

Slowbro's Unite move binds the target for 3 seconds, immobilizing them while dealing damage. It's a powerful Unite Move which can be used as a counter to your opponent's Unite move. Taking one enemy out of the fight can be very effective if done carefully!

Pokemon Slowbro Is Weak Against

How To Play Against Slowbro

Pokemon Slowbro Is Strong Against

Tips When Allied With Slowbro

These are the actual hp recovery of this move without any Held Items equipped.