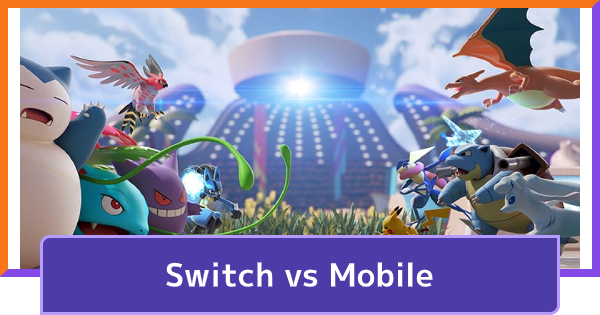 Read this article to know the differences between the mobile (iOS, Anrdoid) version & the Switch version of Pokemon Unite! Know which features are similar, controls, & more!

(!) The mobile version is set to release on September 22, 2021. You can check out the pre-registration guide for more info.

Although the Nintendo Switch is designed to be brought to almost virtually anywhere, it can be a bit bulky when compared to a regular smartphone. With that said, due to its compactness and availability (most people have a smartphone), the mobile version of Pokemon Unite wins out this round.

Able To Use Mobile Data On-The-Go

If you are out somewhere and you want to kill time, you can also use your mobile data to connect to the game. However, check your surroundings first if the mobile signal is good enough for playing as it may cause lag issues.

Surprisingly, the mobile version plays well despite having the buttons plastered on the screen and taking up space. The addition of helpful and intuitive targeting and aiming system makes it a superior choice compared to the Nintendo Switch's. However, with the inputs being on the screen, you can easily make mistakes and the experience may vary depending on your device's screen size (and thumb size). While the Switch has a better control scheme, you have to contend with troubles like Joycon drift, a problem that can be expensive to remedy.

Both the Nintendo Switch and the mobile version can cater to controllers, either first or third party. This can help eliminate the problems stated above but it might cost you.

The Nintendo Switch's screen size varies depending on the model and has either a 6.2-inch or a 7-inch display. If you have a dock for the Switch, you can then use a monitor or TV to output Pokemon Unite. For mobile versions, display and framerate wildly varies depending on the make, brand, and the model of the device. We'll have to go with the Switch version due to it being a bit larger than the usual smartphones.

When it comes to voice communications, the mobile version takes the cake. While you can rely on the game's built-in voice comms system, it is quite limited. With the mobile version, you can play the game while having voice apps like Discord running in the background, something you can't do with the Nintendo Switch version.

If you're planning on using you Bluetooth headset, the mobile version is the better option as it supports Bluetooth devices. Aside from this, the mobile version can be accompanied with a more robust recording app to easily record a whole match without needing a capture card. Suffice to say that the Nintendo Switch version is severely limited when it comes to options and features. In terms of content, the Switch and mobile version are 1:1 copies of each other.

Which Is Better? Mobile Or Switch?

It Depends On Your Preferences

The mobile version is more easily accessible than the Switch version as you can use a readily-available device to play. You can also heavily tweak how you play the game as you can use features that are either absent or limited with the Nintendo Switch version. Comparatively, the Switch version of Pokemon Unite runs perfectly well and may not be prone to errors or crashes. All in all, it depends on your preference. Both options are great and what's important is that you choose the method you feel most comfortable with.

Mobile May Be Prone To Crashes

As Pokemon Unite's mobile version is being developed to be compatible with several devices, it's possible that errors may occur. If you want a more stable version of the game, your best bet is to go with the Switch version as it has been updated to run smoothly.

Why Not Both Switch & Mobile?