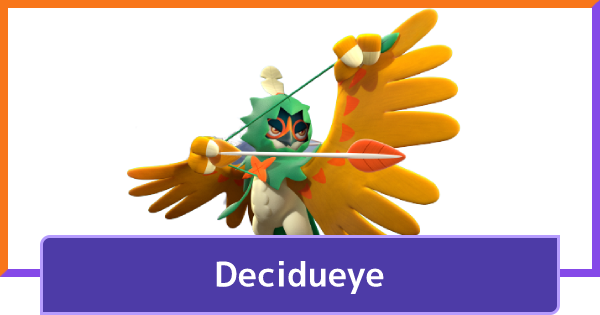 Shadow Sneak really packs a punch as not only is it a Sure Hit, but it also debuffs the unfortunate enemy that it hits - slowing them down and lowering their defense in the process. This is great for preventing enemies from escaping, and paired with your onslaught of attacks from Razor Leaf, you're bound to see some quick KO's.

Spirit Shackle gives you the option to either attack immediately or charge to a certain degree to deal more damage and slow your enemies down. Either way, this move gives you the option of going easy with quick hits, or more strategic with fully charged hits depending on the situation at hand.

Shadow Sneak really packs a punch as not only is it a Sure Hit, but it also debuffs the unfortunate enemy that it hits - slowing them down and lowering their defense in the process. Use it to prime your enemy for a quick KO!

Leaf Storm is a great move for both damage-dealing and crowd controlling as it attacks Pokemon in range and can shove them out of the way if you hit them at point-blank range. This move is particularly useful when pushing enemies out of the way to prevent them from scoring or even moving them further away from Wild Boss Pokemon.

Use Spirit Shackle to steal last hits from the enemy team even from a distance. This move can deal more damage the longer you charge your shot, so make sure you use your environment to your advantage! Use bushes near objectives as a safe hideout while you power up Decidueye's quills to deliver the deadliest blow!

Use knockback from Leafy Storm to prevent enemies from getting near Decidueye! It not only deals damage to enemies but also slows them down. This move also has a wide range of AoE that can affect multiple Pokemon which is useful when crowds gather to capture team objectives.

The All Power (JSteel42's Build)

This section has basic tips and tricks that you must know to effectively control Decidueye.Treat this as a supplement to the Beginner's Guide.

This section is for those looking to up their play with Decidueye. Treat this as a supplement to the Beginner's Guide.

Although Astonish is an equally great offensive move, Leafage is the more certain choice as it deals more damage than the former and can hit several Pokemon at once! Aside from this, it also increases your Attack & attack speed. You may choose to then follow up with Astonish which would both deal damage and slow your opponent's movements, but pay attention to your positioning!

You will find that your endurance is on the lower end, especially at the early stages of the game. Avoid close fights and generally try to keep your distance as you inflict continuous damage on your opponents.

Focus On Farming To Level Up

Rowlet won't have much firepower until it levels up and gets access to stronger moves, so focus on farming Wild Pokemon at the earlier stages of the game and get that much needed EXP.

At level 8, you'll get a choice between Leaf Storm & Shadow Sneak. The former lets you deal hits from afar and gives you some CC capabilities as it can shove Pokemon that you hit at point-blank. The latter, although dealing less damage than the former, is a Sure Hit and is very useful in preventing enemies from escaping. Consider adjusting your 2nd move depending on which style you prefer.

With this build, you'll be able to prevent even the fastest Speedster from escaping! Begin with Shadow Sneak to debuff its movement speed and defense. This move also gives you a speed buff, enabling you to chase after a fleeing opponent. Then follow up with Razor Leaf and fire your enemy with an onslaught of basic attacks. Watch as they quickly get KO-ed before they even get a chance to escape!

This build pairs two strong moves together in a lethal combo. Start with Spirit Shackle to charge and aim at an opponent from afar. Then, once they retaliate and try to come near you, quickly follow up with Shadow Sneak for a Sure Hit and to lower their movement speed & defense. This gives you a great set-up for a good chase!

A build that fully utilizes Decidueye's ability to fire attacks at several opponents at once! Start with Razor Leaf to trigger your ability to fire basic attacks toward multiple Pokemon and get a few hits in. Then follow up with Leaf Storm to further the onslaught of damage to the whole stack.

This move can be quite useful in team fights as it inflicts damage on all enemy Pokemon around you and can even be targeted toward a specific area as you spin around in place! It's proving to be a great ult not only for for stealing the last hit on objectives but also for KO-ing surrounding enemies! What a wipeout! If you're struggling in a fight, consider saving this to try to get the last hit on Zapdos.

This section will guide you on which specific Wild Pokemon to target in order, as well as what to do at the start and end of the game. This guide is based exclusively on a jungle build.

First and foremost, it is recommended taking Leafage as your first skill since this move deals more damage than Astonish. You can move quickly on the Central area by using the Eject Button to go over the wall. KO all the wild Pokémon in the Central Area to reach Level 5 and evolve into Dartix.

Dartrix's performance is low until it reaches level 7. When attacking and defending against an opponent, be careful not to over extend because this could get you KO-ed if you're not careful. Make sure to aim for Level 7, where you'll evolve to Decidueye and choose Spirit Shackle as your next skill.

Decidueye's endurance is quite low, so attacking Zapdos alone might get you KO'd. We recommend attacking with an ally, and try working up to level 13 - at which point Leaf Storm will be upgraded and deal more damage.

Pokemon Decidueye Is Weak Against

How To Play Against Decidueye

Pokemon Decidueye Is Strong Against

Tips When Allied With Decidueye