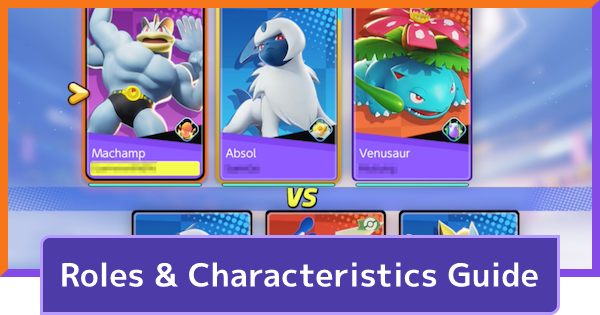 Pokemon Roles - What They Are & Battle Styles

Shows the Strength & Weakness Of A Pokemon

Pokemon are divided up into roles according to their various strengths and weaknesses. These roles will fulfill different functions in battle: Attackers, for example, will focus on dealing damage from afar, while Defenders will initiate, protect, and use crowd control abilities. It's important to be aware of what your Pokemon's role is so you can maximize its potential.

The Characteristics Of The 5 Roles

There are currently 5 roles in Pokemon Unite with distinct strengths & weaknesses for players to experiment with. Some may have more complicated moves & abilities that players may need to master in order to bring out a Pokemon's full potential.

The Attackers are the nukers in the game. These Pokemon specialize in dealing damage to either a single target or multiple ones. As most of their stats are concentrated on their offensive capabilities, HP and sometimes even mobility suffers, making them very vulnerable after using their moves.

Attackers are further subcategorized as either Sp. Attack or Attack-types. While both directly damage an enemy Pokemon's HP, damage calculations for each one are a bit different. Attack-types deal with an enemy's Defense while Sp. Attack ones deal with Sp. Defense. Knowing which type when using an Attacker is extremely important as your Held Items can be used to greatly buff your moves.

Can Use Normal Attacks From Long Range

Attackers can deal damage from a longer range with their normal attacks & abilities, making them ideal for harassing and damage-oriented play. They can also burst down Wild Pokemon with relative ease, so they will often head to the top or bottom lanes.

An Attacker's strength lies in its ranged attacks, especially against melee Pokemon. However, their low endurance (HP) means that anyone that closes the gap can make short work of them. Positioning & awareness will be absolutely key for an Attacker player.

The All-Rounders are the in-between Pokemon, the ones that boast good stats all around. They can fulfill different roles such as a Dewfender, Supporter, and sometimes even as Attackers and Speedsters. Although great overall, their numbers struggle when compared with more specialized roles. If you want flexibility, All-rounders are the Pokemon for you.

All Rounders strike a balance between attack & endurance and are capable of dealing high damage up close while also withstanding some punishment. They can also work in the top or bottom lane depending on your team. However, given that All Rounders tend to require a lot of exp to scale and level up, bottom might be better.

Can Be Built Differently

The move sets of All-Rounders are pretty varied and they decide which roles the Pokemon can fulfill. Some roles add more mobility while some add buffs to either the Attack or Defense of the All-Rounder. Carefully pick your moves during matches and compensate for your team's lack when using an All-Rounder Pokemon!

The Durable Tanks Of The Team

Defenders have tons of HP & high defenses, making them very difficult to take down. Many of their moves further bolster their defensive capabilities. Defenders usually go to the top or bottom lane.

Due to their exceptionally large HP pool, Defenders are the go to Pokemon when ganging up on Pokemon Bosses like the Drednaw, Rotom, and Zapdos. To keep these damaging Pokemon from eliminating teammates, Defenders must get the aggro and soak the damage for the whole team.

Have Lots Of Crowd Control Moves

Defenders come with unmatched crowd control moves that can stun or split up enemy teams. You may struggle when alone due to lack of damage, but you also won't die very easily, letting you escape easily.

Speedsters have high mobility and can reposition very quickly, allowing them to support top & bottom lanes while roaming around the mid lane. As their attack range is short & their HP low, the Speedster will need to look out for enemy crowd control lest they be ganged up upon.

With their high mobility, Speedsters make the mid lane their home. In the mid lane, they can farm the buffs to bolster their damage and then go to ailing lanes to support. Most Speedsters have moves that allow them to traverse obstacles and walls, allowing them to quickly escape or chase. down fleeing enemies.

Thanks to its high damage & speed, Speedsters can easily navigate the map to get goals under the enemies' noses. However, this requires Speedster users to be aware of their surroundings and also of the enemies Pokemon's positions.

Provide Excellent Support For Other Teammates

As the name implies, Supporters are great when they're helping other Pokemon. They can heal, provide buffs, increase movement speed or even debuff the enemy. Thus, they usually take the bottom lane but may go top depending on team composition and strategies.

While Supporters lack the power to beat enemy Pokemon, they do make up for it with their Unite Moves. Supporters mostly have good Unite Moves that have multiple effects. These moves usually grant buffs to teammates while inflicting stuns, immobilizing enemies, or completely scattering them. If you want to change the course of a fight, properly time the Unite Moves of your team's Supporters!

Supporters are great when with another player, but are limited in their ability to deal damage, so they're quite vulnerable when caught alone without any escort. Always stick with your teammates and don't get isolated.