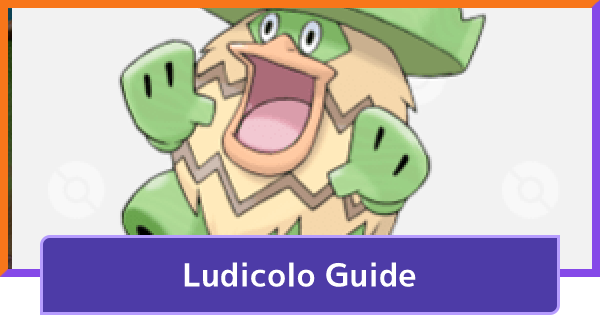 Replaced With Stantler During The Holiday Event

During the Holiday Event in Remoat Stadium (Snow & Ice), Ludicolo is replaced with Stantler for the duration of the event to match it with the theme.

Ludicolo is a wild Pokemon that can be found in the maps of Pokemon Unite. When beaten, the player that gets the last hit on it will get a buff that increases damage dealt to enemies with low health.

↑ Note how the auto attack damage increases significantly as the enemy Corphish gets lower and lower on health. This is the primary effect of the purple buff.

You will know that you've received the Ludicolo buff when an icon appears in the bottom part of your screen. Your Pokemon will also have a purple ring around it for the duration of the buff.

Once you've defeated Ludicolo, you will instantly receive the Purple Buff. Take note though that the buff will only go to the player that does the last hit on Ludicolo. This is not shared.

A Must For Junglers

It's highly important to be aware of the presence of Ludicolo on the map, as its buff can be quite deadly in securing a kill. Grabbing this buff right before going for a gank is extremely helpful. Conversely, it will be important to note if your opponent has this buff, so you know to be extra careful.

Found On Both Sides Of The Map

The map is pretty much symmetrical even with the spawn locations and the number of Wild Pokemon. Both teams will have an equal chance of getting the Purple Buff since there would be a Ludicolo on both sides of the map.

You can easily know the situation of the Ludicolos on the map by checking the minimap. If they have spawned, a small yellow dot will mark their set location. If they're defeated, the dot will disappear.

Spawns 15 Seconds Into The Match

Ludicolo and Bouffalant will not be present immediately once the match starts. Players will have to wait 15 seconds before they will appear on the map.

Respawns 1 Minute After Being Defeated

Ludicolo will respawn exactly a minute after being defeated. With a relatively quick respawn rate, you can easily have the Purple Buff for most of the game by farming Ludicolo.