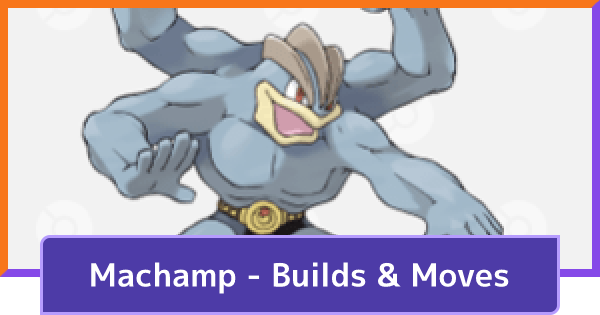 Machamp has gotten two fixes for the Sept 22 patch. Its Unite move has had some adjustments, but it's not clear whether they constitute a nerf or bug.

Machamp also received a few adjustments this past patch, with a buff and a nerf on two of its moves! Close Combat damage has increased by 6% while Cross Chop was nerfed by a substantial 44%.

Machamp can easily go mid and farm buffs to help the top or bottom lanes. You can use Bulk Up to increase your movement speed to chase down enemies. Submission is also your go to move when ganking.

Submission can make Machamp immune to status ailments while granting it increased movement speed. Cross Chop not only provides added burst damage, but it also lets Machamp dash forward to either catch up or escape.

As a melee all-rounder, Machamp will need extra attack & defense so he can keep up & deal damage to the enemy team. Stack these 2 stats so that Machamp can close the distance, maintain damage output, and survive after the scuffle.

Machamp's basic attacks may be enhanced with Muscle Band to increased the damage equivalent 1% of the opposing Pokemon's remaining HP while also improving your basic Basic Atk Speed. Meanwhile, Focus Band will help Machamp absorb less damage from the additional Defense it provides as well as recover 8% of lost HP. Attack Weight on the other hand greatly refine Machamp power by increasing it Attack by a minimum of 6 whenever you score.

This Machamp build can cover a long distance with the help of its 2 dash skills. Dynamic Punch also buffs your move speed to close the gap. Aside from that, the skills can also be used to go over walls and obstacles.

As mentioned above, the 2 dash skills help Machamp be more mobile during a fight. If used well, these skills can help you chase down enemies or escape ambushes without any trouble.

Dynamic Punch not only stuns affected enemies but it also buffs Machamp for a short period of time. Cross Chop allows Machamp to dash forward while granting it a critical rate buff. With these 2, Machamp can output a ridiculous amount of damage with your basic attacks.

Machamp's tankier than other Pokemon, allowing you to stay longer in the battlefield to deal tremendous damage.

Do Not Attack Alone

Machamp's damaging capabilities are somewhat normal. Remember to attack only with teammates as it is very likely that Machamp's damage won't be enough to down some Pokemon.

Close Combat and Dynamic Punch allows Machamp to instantaneously close a gap, stun an enemy, and deal a large damage. When used correctly, these 2 skills plus some normal attacks can easily secure a kill.

Aside from attacking enemies, Dynamic Punch can be used to jump away from a fight. You can also use this to have Machamp jump over walls, so aim well when either escaping or ambushing.

This section has basic tips and tricks that you must know to effectively control Machamp. Treat this as a supplement to the Beginner's Guide.

This section has basic tips and tricks that you must know to effectively control Machamp. Treat this as a supplement to the Advanced Players Guide.

Focus on leveling up from Wild Pokemon as a priority as you're still pretty weak without levels. Aim to quickly reach level 5 before you go for the offensive. You can do this by knocking out all the wild Pokemon in the Central Area. Avoid initiating and stick close to goals if the enemy team is being aggressive.

Bulk Up leaves you immune to status ailments and it increases your movement speed. Use this when an enemy Pokemon makes the mistake of going in deep towards your goal. Make sure to have a teammate with you as your damage will likely be not enough to take down a Pokemon during this stage.

Continue to level up but pay attention to the Drednaw or Rotom based on your lane. You can be a bit more aggressive now that your moves are unlocked but you should always remember to have your HP up as your defense isn't that exceptional. Take the opportunity to jump enemy Pokemon using your Cross Chop & Submission combo.

Machamp's moves can disable enemies so use them to initiate attacks with your team. With a reliable damage-dealer, Machamp can defeat any enemy Pokemon. Be flexible and move around the map if you have to so you can assist ailing lanes. It is more effective when used in a melee situation as it can damage all opponent's Pokemon within range.

It is highly effective against defense-type Pokemon that use disables because its high resistance makes it difficult to be immobilized by them. You can use this to your team's advantage by taking them out before they can disable your allies.

Adapt Your Build To The Situation

At Level 7, you'll need to choose a move that will determine your playstyle. Dynamic Punch can let you jump in for an easy attack, while Submission can be helpful in breaking enemy lines by tossing Pokemon towards your rear. Pick a move depending on if you're going solo or have good coordination with your team. If you want to close distances fast, then choose the Cross Chop + Dynamic Punch Build. If you want to do crowd control, choose the Close Combat + Submission Build. If you want a bit of both, get Cross Chop + Submission.

How To Use Unite Move: Barrage Blow

Barrage Blow greatly increases Machamp's movement speed, Attack, Defense, and SP Defense. When triggered again, the move ends with a slew of punches that deals an incredible amount of damage. Using the attack does not remove the buff so use the attack immediately if you find yourself in a favorable position to hit multiple enemies.

You can also use Barrage Blow's buff to initiate attacks for greater damage. This can incredibly increase your numbers if used with buffing moves like Cross Chop & Dynamic Punch. You can press the Unite Move button again to deal more damage.

You can use either Submission or Cross Chop to initiate attacks. You can open with either and use the remaining skill to chase down enemies. Submission should mostly be utilized when chasing or locking down an enemy for your team to burst down. Note that Machamp can use Cross Chop to cross thin walls, so use this skill to join or escape attacks.

Start with Dynamic Punch to quickly deal a hit to your opponent and leave them stunned. This move speeds up your movements and boosts your next basic attacks, so deal a Normal Attack and quickly follow up with Cross Chop to land a critical hit. These successive hits can prove to be quite lethal in battle.

Open the attack with a well-aimed Dynamic Punch. Afterwards, shower the enemy with multiple punches using Close Combat. The damage output is instantaneous with this build so buff up and carry Held Items that can increase Machamp's attack damage and critical hits.

Open up with Submission to get its various buffs, then hit the enemy with your boosted normal attack. When the enemy is stunned, hit then again with a normal attack then finish off with Close Combat. This will make use of all buffs to get the most damage in your attacks.

Vulnerable If Focused On

Machamp has more HP than most other Pokemon but is still on the vulnerable side. If Machamp gets targeted, it will be KOed very quickly. Use terrain such as Grass to cover your movement and always have an exit strategy when fighting.

Fight With Team To Take Out Zapdos

Coordinate with your team to push or take out Zapdos. Avoid defending alone as you're vulnerable if ganged up upon. Your main priority is Zapdos or taking out key enemy Pokemon in group fights. As you're still quite squishy, be sure to fall back when your HP is low.

Fight With Your Team

Although Machamp boasts a decent damage output, it may not be enough during the latter parts of the match. Make sure to team up with other Pokemon for better damage and more KOs.

This section will guide you on which specific Wild Pokemon to target in order, as well as what to do at various stages of the game. This guide is based on Machamp's jungle builds.

We recommend you learn Bulk Up as your first skill, since it increases your attack, attack speed, and movement speed, and turns your next attack into an enhanced attack. At the start of the match, don't hesitate to use the Eject Button to get over the barricade to reach Lillipup.

Machamp should get Submission once you've reached level 5. In the bottom path use Submission to catch your opponent and prevent them from taking the last hit or getting away, etc.

While using Submission, Machamp's movement speed increases and it gets immunity to hinderances. Work with your teammates closely by running up to an enemy Pokemon, catching them, and then slamming them over to your sided. Your allies should follow up and get a quick KO.

Machamp's Unite move series of powerful forward attacks. We recommend to use it in group fights against opponents who are clustered in one place. Use it against Zapdos and on Drednaw to get an advantage in both of these battles. It's possible to pull off insane multi-kills here, so make sure you have this ability ready!

Pokemon Machamp Is Weak Against

How To Play Against Machamp

Pokemon Machamp Is Strong Against

Tips When Allied With Machamp