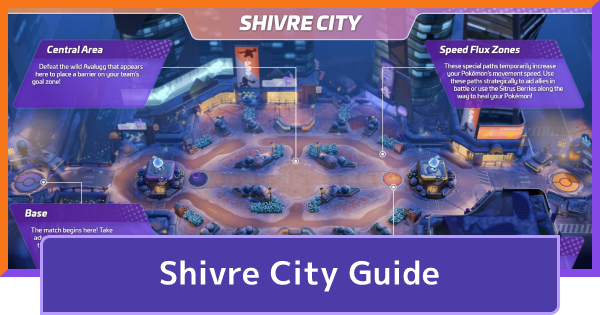 One Of Several In-Game Maps

Shivre Island is one of the featured maps in Pokemon Unite. The snow-laden city includes its own set of Wild Pokemon and Boss Pokemon, including Avalugg.

Shivre City is a 4v4 Quick Battle Match that can be played randomly. This map is not available for Standard & Ranked Matches.

In the 4v4 Quick Match, teams are only composed of 4 players each. It has the same gameplay as the regular matches but fewer players and only 5 minutes of match time.

One Goal For Each Team

Unlike the larger Remoat Stadium, Shivre City has a single goal for each team with only two lanes. The middle part spawns the boss Pokemon, Avalugg.

Goals Have No Limit

Players can continually score points at the goals since the goals in Shivre City have no limit. This makes it a priority to score as much as you can in the time limit.

Final Stretch During The Last Minute

When the game gets to its final one minute, the final stretch will activate. This doubles all the points scored for both teams.

Speed Flux Zones Helps As a Replacement to Salac Berry

Your Pokemon’s movement speed will increase when they walk on the path in the Top or Bottom lane. This can be a replacement for the Salac Berries in the Remoat Stadium. Use this to your arsenal either chasing your opponents or running away from them.

Since the Shivre City map is smaller than Remoat Stadium and only consists of a single goal from both teams, having a Jump Pad in the game is unnecessary. However, you can also roam around the city within a shorter time thanks to Speed Flux Zones.

Avalugg Gives A Barrier & Ice Shields To The Team

Defeating Avalugg will give a barrier on your team's goal zone, the team will be protected by an Ice Shield which can also damage opponents. Also, take note that the ice shield breaks once you've taken enough damage. Avalugg also respawns every 30 seconds after its defeat and can be defeated multiple times.