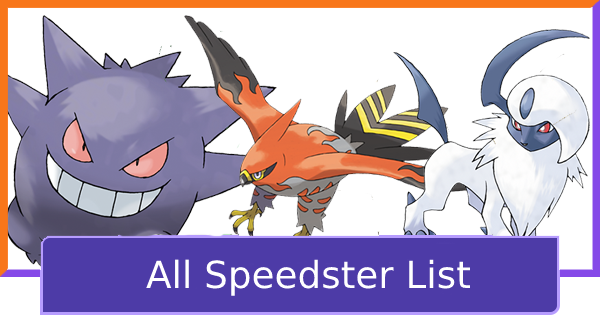 Trick Or Treat Your Enemies With Zoroark This Halloween! (New!)

The hauntings has begun as Zoroark creeps from the shadows into the Unite Arena dressed in its fancy Costume Party Style holowear, just in time for Halloween! Check out our guides below to learn more about Zoroark's powers to scare your opponents this spooky season.

The Speedster type offers a playstyle with extremely high mobility. It's easy for them to reach the goal by taking advantage of this, so you can expect to be one of your team's main scorers. That being said, Speedsters are a little bit on the squishy side!

These are the actual Lv15 stats for all Speedster-type Pokemon without any Held Items equipped.

Speedsters rely on their speed to harass and chase down enemies. Their bread & butter is Atk (or Sp.Atk), so you'll want to focus on this above all else.

Speedsters benefit greatly from items that get them out of sticky situations. Having items that provide a sudden burst in stats will also help on the occasion they need to burst down a target.

The speedster-type has low durability and is easy to be KO'd like the attack type. However, due to its high maneuverability, They can easily escape from other than the same battle style.

Speedster Role - Lanes & How To Play

The Speedster is good at rushing to support allies by taking advantage of its high maneuverability. If the player is in charge of the central route, it will be easier to go to both the upper and lower routes, and it will be easier to rush. Also, the wild Pokemon in the center will be for the taking without competition.

Which Wild Pokemon To Attack In The Middle Lane

As a speedster type, we highly suggest that you choose the middle lane and try to go for the Wild Pokemon in the list above. Getting the final Corphish in this route will let you hit level 5, giving you a power spike over most laners. Immediately follow this up with either a lane gank or an enemy jungle invade.

Speedsters take on the assassin / jungler role, often moving independently for the chance to steal enemy Wild Pokemon or harass lone enemy Pokemon. They come with a very high attack & speed to move around easily, but are vulnerable if cornered.

Be Aggressive To Exploit Openings

When playing as a Speedster, it is vital to be active at all times. Either chase after Wild Pokemon non-stop, looking for a chance to sneakily score, or help with skirmishes to take out enemy Pokemon. A good speedster has the chance to flip the tables and change the outcome of a battle, so make sure to be constantly aware!

Vital To Get Fed In The Current Meta

Speedsters, if fed with EXP correctly, can be one of the most powerful Pokemon in the game. It may be prudent to try to feed your Speedster, while doing all you can to harass the enemy team to avoid having their Speedster become unstoppable.

Due to their great speed & damage, Speedsters can farm EXP from Wild Pokemon to get to higher levels very fast. Position yourself to gain as much EXP from them as you can. Also, while risky, it may sometimes be worth the risk to try to steal the last hit of a tough Wild Pokemon the opposing team is trying to take down.

How To Play Speedster Tips

Travel Between The Grass

While moving from lane to lane, hop from grass to grass to stay out of sight. This will not only hide your presence, but also act as a way to scout possible opponents hiding in the grass.

Try To Get Dropped Aeos Energy From Enemies

If the KOed opponent Pokemon has Aeos Energy, the speedster should be given priority in picking up said energy, as they'll have an easier time reaching or sneaking into a goal. An Aeos Energy packed Speedster can flip the outcome of a battle, especially with the 2x points bonus during the last 2 minutes of a battle.

Since enemy speedsters are also quite mobile, it can be difficult to escape if you get caught off by them in an unfavorable battle. Pay particular attention to the position of your opponent's speedster on the field and minimap to avoid this.

What To Do During A Match

A speedster's Unite Move has the potential to do a lot of damage, similar to that of Attackers, so try to plan ahead and save your Unite Moves for major engagements. When using them, you can follow up your teammate's Unite Move to potentially KO multiple enemy Pokemon.