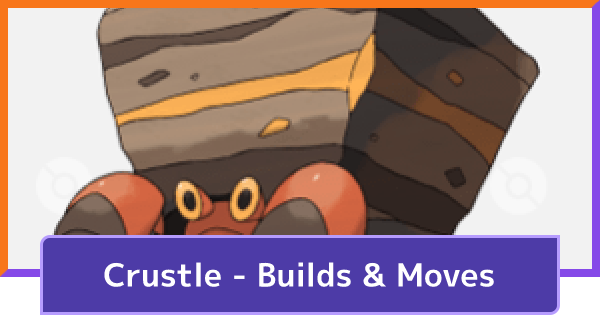 Crustle has received one minor fix for the Sept 22 patch, which fixes the contact range on its basic attack. However, a new bug has emerged in this patch where Crustle's Unite Move charges faster after it dies.

Crustle has received two buffs in the August 18th patch, getting buffs to two of its abilities, with the Stealth Rock buff being quite substantial.

Shell Smash For A Power-Buff

Shell Smash maximizes Crustle's attack and movement speed, making it a real force in the battlefield when activated. This move is particularly great for when you're in enemy territory - you can counter your lowered speed with this move and immediately be able to move like normal, while also dealing more powerful attacks.

X-Scissor has you dash forward and deal damage multiple times - making it quite the powerhouse move when used correctly. It also stuns the enemy Pokemon if it hits any object after being shoved after this move. Do note that you'll have to time this move well as it isn't always a sure hit.

Rock Tomb To Keep Enemies Away

Rock Tomb is one of Crustle's main moves and mastering it is vital to your success with it. With this build, Rock Tomb is especially useful in keeping enemies away - whether it's from the goal or Pokemon you want to protect, or from yourself! This move paired with the speed boost from the Float Stone will give you ample opportunities to run away from a perilous battle.

X-Scissor has good burst damage and can cause wide crowd control. Make sure to time this move well as it can leave Crustle exposed if not timed correctly. This build gives Crustle more bite on the offensive end, so this move is particularly useful for taking on wild boss Pokemon such as Rotom, Zapdos, and Drednaw. It's also great at pushing enemies away from whatever you're protecting.

This build ensures that Crustle is rock-solid and tanky enough to sustain damage, so maximize Rock Tomb to keep your enemies close and cut off their attempts to retreat. This is particularly useful when you're with an Attacker as you can work as a team to corner the enemy into a tight space - leaving them unable to run away from your assaults.

Stealth Rock doesn't have the overall damage potential of X-Scissor, but it's particularly useful whenever you're splitting enemy formations and want to inflilct damage to all enemies in the vicinity. It's a great move to utilize in large battles, or when you want to inflict damage even as you hide behind the Rock Tomb.

This build carries 3 Held Items that buff Crustle's Defense and HP, making it capable of taking punishing attacks without flinching. Make use of the buffs and be the frontline that leads your team to fights!

Rock Tomb & X-Scissor are 2 skills that can have significant impact in the battle. They can both screen or ward off enemies from your softer teammates and can also disrupt enemy formation.

This section has basic tips and tricks that you must know to effectively control Crustle. Treat this as a supplement to the Beginner's Guide.

This section is for those looking to up their play with Crustle. Treat this as a supplement to theAdvanced Players Guide.

Take Rock Slide first for extra damage. Clear Wild Pokemon near your lane. As you're still relatively vulnerable, avoid combat with the other team. Stay around your goal, farm exp, & use the Yellow Berry (Sitrus) if you get hurt.

Return To Base If HP Is Too Low

Crustle has a large HP pool that it relies on heavily to stay effective in the field. Its large HP pool also means that its hard to rely on natural healing to fully recover before the next battle. Don't hesitate to return to base to fill up your HP when it drops too low.

At this stage, you can start to be a bit more aggressive and join fights. Your high defense stats make it difficult to KO - so being on the battlefield can definitely add pressure to the opposing team. Depending on which move you choose for this stage, you can take on a more aggressive role and deal damage, or do crowd control and hinder the actions of your opponents.

When you get to Lv 4 you'll get a choice between Rock Tomb & Shell Smash. Choose Rock Tomb if you have a good aim and want to focus on crowd control needed for your role. Note that you'll need to familiarize yourself with the placement & timing of Rock Tomb to make it truly shine in battle. Choose Shell Smash if you want to take a more offensive role as this buffs your attack in exchange for a percentage of your defense.

Rock Tomb Can Be Difficult To Aim

Rock Tomb requires precise aiming and timing to fully utilize. As it can block enemy movement, make sure to land it to where the enemy would be. It can be difficult at first but practice more and you'll master using the Rock Tomb in no time!

Once you hit Lv 6, do make it a point to check the minimap to help lanes that are doing poorly, and find opportunities to take out Drednaw or Rotom. The 2 teams will start clashing more often, so keep your HP high in preparation for skirmishes.

Best To Work With Teammates

At this stage, Crustle's damage will be insufficient to take down Pokemon alone without Shell Smash, while enemy Pokemon damage will rise substantially. Regardless of which move you chose previously, it's always a good idea to work with your teammates in battle.

Choose Your Second Move Based On Situation

Your Lv 6 move will depend a lot on your situation: Ideally, X-Scissor will give the most damage and crowd control but requires skill to use effectively. Also, the move's dash component could be fatal as Crustle lacks moves that can let it jump out of a nasty situation. If you have trouble using this move or if there are uninterruptable enemies like Machamp, choose Stealth Rock instead.

How To Use Unite Move: Rubble Rouser

Rubble Rouser turns Crustle into a full-on tank, buffing Crustle with a large shield and surrounding it with rocks that damage enemies nearby. Use this move when you find yourself being targeted by a lot of enemy moves. Probably the best way to use this is to bait enemies to attack you until you get to a low HP. Once the enemy team starts using most of their moves, use this move to take the brunt of the attack. This leaves them without any moves to counter your team's.

Always start your assault with Shell Smash to prime your attacks for max damage and to up your movement speed to chase after enemies that are attempting to run away. Then, follow up with X-Scissor to deal with several powerful hits. Quickly deal with successive normal attacks to seal the deal and KO your opponent.

This combo is particularly useful for maximizing the stun effect of X-Scissor and for singling out a particular enemy. Begin with Rock Tomb to create a barricade between you and your opponent. Then, follow up with X-Scissor to run them into the wall to damage and stun them. Quickly dish out several Normal Attacks to inflict maximum damage before the wall dissipates.

This combo works great when working with teammates to corner enemies into getting KO-ed. Begin with Rock Tomb to prevent the enemy from escaping and to keep them in a particular area. Then, quickly follow up with Stealth Rock to inflict increasing damage toward the area where you've cornered them.

When you realize that you might have placed the Rock Tomb wall in an undesired position, immediately press R again to have the wall dissolve away. This can prevent trapping your own team in an unfavorable position!

This section will guide you on which specific Wild Pokemon to target in order, as well as what to do at various stages of the game. This guide is based on the Shell Smash/Stealth Rock build.

There are 2 moves to choose in the beginning of the match. However, we recommend to learn the move Fury Cutter first since you can do a lot more damage and quickly KO the Aipoms, letting you get to the middle of the route quickly.

Rock Slide will drop a rock on the target's location, damaging them and also stunning them. It is effective to . You can also go to the bottom route faster by using Shell Smash.

Crustle's Unite Move is an attack that makes opponents unable to move, while also dealing ongoing damage within the area. It is very useful for interfering with opponents who are trying to get the last hit on Zapdos or Drednaw.

Pokemon Crustle Is Weak Against

How To Play Against Crustle

Pokemon Crustle Is Strong Against

Tips When Allied With Crustle