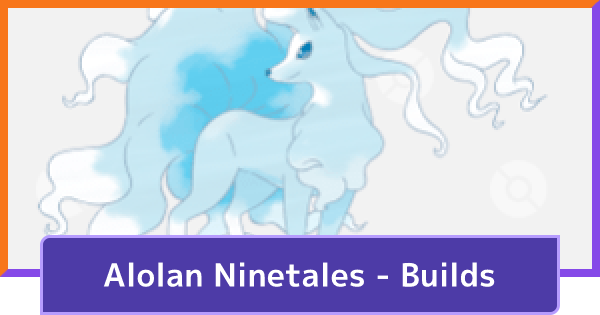 Alolan Ninetales received a buff on the November 10th patch with Blizzard's decreased cooldown and damage increase. There are some changes to the Alolan Ninetales's Sp. Attack damage can be lethal in the match.

There have been some adjustments and bug fixes on Alolan Ninetales during the September 22nd Patch. This includes some adjustments to the way Blizzard deals damage when the move hits an obstacle & an interesting bug fix regarding Snow Globe and ally Pokemon's freeze effects. Given that no other Pokemon are able to freeze, it's possible we may have gotten a glimpse of Mamoswine's abilities!

Alolan Ninetales saw two bug fixes in the most recent patch. These should overall result in a more pleasant gameplay experience for the Pokemon.

Alolan Ninetales received a bug fix during the patch for its Snow Warning ability.

Blizzard is quite the beast in battle as it rolls 3 benefits in one: it deals damage, shoves opponents forward, and reduces their speed - making it harder for them to run away from your powerful assaults. Pairing this with Avalanche - a move that is both damage-dealing and enemy movement-hindering - gives you everything you'll need to corner enemies into a getting KO-ed.

Although Avalanche is great for dealing damage in a set area, most opponents in battle know better than to stay there once the sparkles start to show. Because of this, Dazzling Gleam is the more efficient move in battle as it not only inflicts considerable damage to opponents, but it also blinds them temporarily - making them unable to move.

As an Attacker, Alolan Ninetales is most effectively utilized by being on the offense - hence making Blizzard the move of choice. This move in particular is quite the beast in battle as it rolls 3 benefits in one: it deals damage, shoves opponents forward, and reduces their speed - making it harder for them to run away from your powerful assaults.

This build will let you both deal good damage and disable foes frequently. You can do so both using Dazzling Gleam's stun, and with Ninetales' auto attacks & passive, which slow and eventually freeze enemies.

The Muscle Band may seem out of place on Ninetales here, but rest assured - it fulfills an important role. Namely, it synergizes with Aurora Veil by increasing your attack speed. This will let you get off more enhanced basic attacks during your Aurora Veil window!

Though Ninetales is an attacker, this build is also excellent at helping out your allies. Aurora Veil will provide a defensive buff to allies, so make sure to use it to help them out!

Avalanche is a great area-based attack that not only deals damage to the Pokemon in the surrounding area but also forms a wall that prevents enemies from passing through. It's a unique move for an Attacker and can be quite useful for keeping enemies in control.

Aurora Veil grants great buffs that give Alolan Ninetales more leeway to jump right into a raging battle: basic attacks get boosted, speed is upped, and the damage received is reduced.

This section has basic tips and tricks that you must know to effectively control Alolan Ninetales. Treat this as a supplement to the Beginner's Guide.

This section is for those looking to up their play with Alolan Ninetales. This is a supplement to the Advanced Players Guide.

Start Off With Powder Snow

While leveling up, you get one move at level 1 and another at level 3. Starting at level 1 we recommend Powder Snow You can pick up Icy Wind at level 3.

Defeat Wild Pokemon To Level Up

You'll need to defeat Wild Pokemon to level up. You can start off with the 2-point Aipoms that pop up early on the path, then work up to the 5-point ones at the center of the Top Lane. Try to target all wild Pokemon you encounter, and if you're with a support partner, ask them to yield last hits to you so you can level up faster.

At level 4 you can choose either Dazzling Gleam, which can stun an enemy for a short time, or Avalanche, which can deal great damage to your opponent and create a wall.

Start with Blizzard to push your opponents away from you as you deal damage & decrease their movement speed in the process. Quickly follow up with Avalanche to continue the onslaught and prevent them from running away.

Remember to keep your distance against your opponents. If your opponent gets near or tries to corner you, use Dazzling Gleam to stun them and follow up with Blizzard to push them back, decrease their movement speed, and deal damage. Quickly deal with consecutive basic attacks and watch the tables turn on your opponent.

If you are fighting a melee attacker, the combo listed above works quite well. You should be able to defeat your opponent with relative ease since it reduces damage received, increases movement speed, and boosts basic attacks.

Alolan Ninetales' Unite Move is great for when you need to go through a large group of enemies in a concentrated area. Not only does it hit all unlucky Pokemon in the way, but it also deals extra damage to those that got frozen in the process.

When choosing Alolan Ninetales, always keep your distance since this Pokemon is a ranged attacker. If you find yourself struggling against aggressive melee Pokemon, consider running an Eject Button as your battle item instead.

This section will guide you on which specific Wild Pokemon to target in order, as well as what to do at various stages of the game. This guide is based on the Aurora Veil/Dazzling Gleam build.

We recommend choosing Icy Wind first as your first skill, since it does twice the damage of Powder Snow. This will let you get last hits easier.

At level 4 you'll evolve into Alolan Ninetales. After learning Dazzling Gleam, you'll become significantly more powerful. Aim for at least level 6-7 before going to battle the first Drednaw by actively KOing your opponents or scoring goals.

Alolan Ninetales has particularly long-ranged attacks . Make sure to use the eventual freeze from its basic attacks or Dazzling Gleam to block opponents who are attacking, fleeing, or attempting to get last hits.

Alolan Ninetales' Unite move has a short wind-up time, making it perfect for sniping the last hit on Drednaw and Zapdos! Make sure it's up for the final battle.

Pokemon Alolan Ninetales Is Weak Against

How To Play Against Alolan Ninetales

Pokemon Alolan Ninetales Is Strong Against

Tips When Allied With Alolan Ninetales