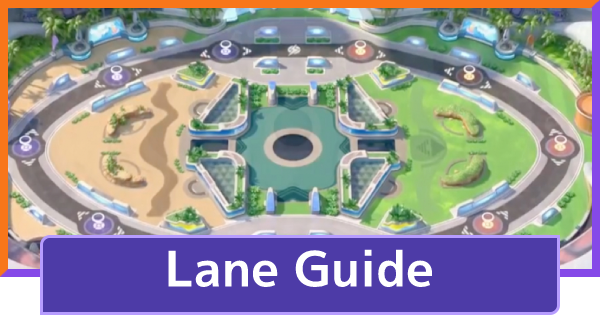 Pokemon UNITE | Pokemon MOBA
Lane Guide - Which Lane Should You Go To?

Check out this lane guide for Pokemon Unite (Pokemon MOBA). This guide Includes what are lanes, which lanes to go to, best Pokemon roles for lane meta recommendation & more!

Map Is Made Up Of 3 Major Paths

The term "lane" refers to the 3 paths that connect the starting areas of both teams. They are often referred to as top, mid, and bottom lanes, based on their relative position. The mid lane is sometimes referred to as the "jungle" or "center".

At Least 1 Pokemon Should Be In Each Lane

Without someone to guard a lane, the enemy team will be able to freely score points on your goal. It is important that players coordinate with the team to decide which lane will be covered by whom before the match starts. Use the pre-match selection phase to indicate what lane you're going!

When in a group battle or when someone has been KO'd, some lanes might be temporarily empty. Be flexible and check the mini-map to see if you need to move over to be on the defensive to avoid enemy capping goals. If you're in the middle, you should be very aware of this.

The top lane is often occupied by Attacker & Defender type Pokemon, though other combinations will work here as well. Attackers are good here so you can defeat Rotom as quickly as possible.

The mid lane is recommended for Speedsters & All-Rounders given that they have incredible speed & can move freely to help other allies in and out of lanes. All-Rounders that rely on experience should head here as it makes their early game smoother. Gaining buffs from Ludicolo & Boufallant will also give you a powerful buff to help improve your clear and ganks.

Generally the Bottom lane is best for Attackers, All-Rounders & Supporters, as this lane has a lot of experience to go around.

It's also common for matches to have massive Teamfights emerge bot lane at the 7 minute mark when Drednaw spawns. People often come from the top lane to participate in this battle, so make sure to be as high level as possible before it starts.

A Lane With Plenty Of Combat

The Top Lane has 2 goals for each team and a lot of wild Pokemon in the vicinity. In addition to this, the incredibly important Rotom will spawn here at 7 minutes into the fight, making it a hotspot for action in the early game.

When going top, try to get the middle Corphish first, as this is an important piece of exp to take away from your enemy team. This will give you an advantage in lane overall.

Rotom can be dealt with relatively safely by All-Rounders, so it's generally beneficial to have at least one All-Rounder go top to get the Rotom. In general though, any Pokemon that can hold its own in an early-game skirmish works well here.

Supporters & Defenders will need to find a Pokemon to follow due to their role types. A Supporter can be paired with any non-Speedster, while Defender is recommended to go with the Attacker so they can cover each other's weakness.

The center "lane" is a large swath of land connecting the map, populated with numerous wild Pokemon and no goals. It is a lane that's somewhat peaceful but will turn into heated contested zone late game!

Zapdos spawning at the 2 minute mark will be the most important objective in the game. Located right in the middle of Mid-Lane, a large team fight over Zapdos will likely happen in every match.

Besides Zapdos, Pokemon that provide Jungle Buffs when beaten are also located in Mid-Lane. You can find the pair in each side of the map, giving equal chance for both teams to get them.

Follow the above order if you're going in the mid lane. Remember not to attack either of the Aipoms, as they are technically not part of your lane. Get Ludicolo & Boufallant for the buffs and then clear out the two Corphish. One clear of this will give you level 5, at which point you can go gank a lane.

The Bottom Lane provides a bit more bit more EXP due to the abundance of wild Pokemon, particularly Audino in its vicinity. The boss Pokemon Dreadnaw will also spawn in this lane!

Make sure to get the Audino located in the top middle of the lane as fast as you can. This is a contested Pokemon, so you'll want to deny your enemy its experience.

You'll want to bring Attackers or All Rounders to the bottom lane to best take care of Drednaw. You could also consider a defender, as Drednaw can be a bit hard to take on for a solo squishy Attacker.