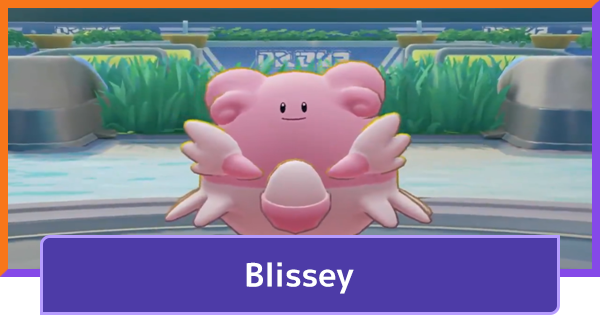 Blissey has been the subject of several adjustments in the most recent patch. One of these is the massive doubling of Blissey's Sp. Def stat, while the other is a substantial buff and slight rework of its Safeguard ability, to hopefully bring it more in line with its rival Soft-Boiled.

↑ A visual example of how the range on Safeguard was buffed.

Stock Up Heals With Soft-Boiled

Blissey's healing potential with Soft-Boiled is quite excellent. Anticipate large engagements, such as Drednaw and Zapdos fights, and store up 3 charges to prepare! When you upgrade this move at level 12, you'll be able to store even more charges.

Being a Supporter, Blissey will need to rely on her allies. Pair her up with a powerful auto-attacker such as Cinderace or Greninja and run Helping Hand to give them a substantial attack speed buff.

Blissey's healing potential cannot be ignored - you'll want to stock up Soft-Boiled for teamfights and unleash it to keep your most important carries alive at all times.

Sometimes, you just have to take out your enemies. Egg Bomb likely won't be dealing the most damage out of anyone your team, but it will provide a good supplement to it. What's more, the brief crowd control (and eventually the movement speed debuff) will also let your allies deal with enemies easier.

Shield Your Team With Safeguard

Support your team with the use of Helping Hand at your disposal. You can grant your team immunity to attacks for a limited time with Blissey's shield. This is essential especially with the constant clashes arising on the bottom lane.

Buff Up With Helping Hand

Safeguard lets Blissey increase not only itself but also allies' movement and attack speed. Your team also gets additional damage from boosted basic attacks during this move. Make sure to use it on crucial close battles and help your team steal the last hits from objectives!

Protect allies with Blissey's Safeguard. It removes all status conditions and grants a shield that makes Blissey itself as well as nearby allies immune to hindrances. Great counteract for crowd controllers within the lane.

Don't underestimate this soft pink blob as Blissey can hurl eggs towards any direction with its Egg Bomb move. This explodes after it gets thrown and dealing damage to anyone caught within the area of effect.

This section has basic tips and tricks that you must know to effectively control Blissey. Treat this as a supplement to the Beginner's Guide.

This section has basic tips and tricks that you must know to effectively control Blissey. Treat this as a supplement to the Advanced Players Guide.

Get Pound to help clear the Aipom on your way to lane as fast as possible. Make sure to yield the last hits to your Attacker teammate.

Make Liberal Use Of Heal Pulse

Heal Pulse will keep you and your lane partner alive healthy and should be used regularly. Blissey's early game offensive potential is rather low, so you will want to play it safe and keep healed up whenever possible.

Soft-Boiled Is Your Best Bet

The healing power provided by Soft-Boiled will be absolutely essential when it comes time to team fight. You'll be able to keep your allies (and yourself) alive during key engagements. The ability to store charges in anticipation of team fights is also extremely useful. In most cases (especially solo queue), you'll want to choose this.

When To Choose Safeguard

Safeguard has the potential to completely thwart your opponent's plans, making an ally immune to hindrances. If you're facing a Snorlax bottom and are able to coordinate with your lane partner, this move might be the key to winning. However, it will take expert timing and good communication with your partner, so we don't recommend it in most cases.

Getting Helping Hand will provide a huge, consistent output of damage and mobility for your lane partner and other allies. You'll want to use this in most cases, as the benefit it provides to the rest of your team is huge.

Egg Bomb provides a decent bit of damage and crowd control for you, allowing you to be a little more proactive with your gameplay. Choosing this option will allow you to make more plays (when contrasted with Helping Hand), choosing when you disrupt enemies. If you're not confident in your lane partner, it might be a good idea to get this move.

When assisting allies in battle, use Safeguard first to remove any status conditions ailed towards the ally you are assisting with Blissey. The shield this move provides will protect you and your ally from attacks while also removing hindrances so you both will be able to move freely around. Use Egg Bomb to blast off enemies around Blissey to provide additional damage and ultimately knock them off.

Use Safeguard on your ally to remove all status conditions and get you both a shield to prevent from getting hindered by the opposing team. Follow this up with Helping Hand to greatly increase Blissey's and nearby ally Pokemon's movement speed as well as the basic attack speed. While this move's effects last, all of Blissey's basic attacks become boosted attacks, so use this to deal additional firepower to your ally.

Soft-Boiled is a great move to heal yourself and your ally especially during close battles so you can over extend and outlive your enemies. Then use Helping Hand to buff up Blissey and its ally's overall speed, making its easier to burst down enemies. You can also use the extra speed to catch up to fleeing enemies or use it to flee from pursuers from unfavorable situations.

Heal Blissey and its ally with Soft-Boiled to replenish their HP pool so they can fight longer in battle. This is pretty effective even against the tankiest Pokemon as you can outlive them. Use Egg Bomb to assist your ally with additional firepower against your opponent and ultimately finish them off with basic attacks.

Use Your Unite Move Wisely

Blissey's Unite Move has quite a variety of effects and is extremely potent, providing an attack boost to an ally, shielding them, intercepting damage they take, and disrupting nearby enemies. As such, you'll need to maximize your use of this move. Coupled with the incredible Buddy Barrier providing an additional (max) 40% HP shield, it will be key to use your Unite Move carefully. Save it for major fights at Drednaw and Zapdos!

This section will teach you which specific Wild Pokemon to kill in order, as well as exactly what to do at various stages of the game. This guide is based on the Soft-Boiled/Helping Hand Build!

Choose Pound as your first move to KO Aipom quickly. With this move you can easily hit both the 3rd and 4th Aipom at once. However, it's still best to let your partner get the last hits.

Since Blissey is rather fragile overall (though it does have high HP), we don't recommend engaging on your opponents too much. Make sure to KO Wild Pokemon on your team's side and hit level 4 to evolve. Also, keep in mind that after you reach level 4, you can lay off on getting last hits and help feed your lane partner.

Blissey is not very tanky, so in group battles it will have to support allies from behind by recovering their HP with Soft-Boiled. When your allies are gathered around Drednaw, use Helping Hand to assist in taking out Drednaw.

Blissey unlocks its Unite move at level 8. Blissey's Unite move increases your ally's offensive capabilities and protects them. Use it on the most important member of your team during the final heated Zapdos battle.

Pokemon Blissey Is Weak Against

How To Play Against Blissey

Pokemon Blissey Is Strong Against

Tips When Allied With Blissey

These are the actual recovery of this move without any Held Items equipped.

These are the actual HP recovery of this move without any Held Items equipped.