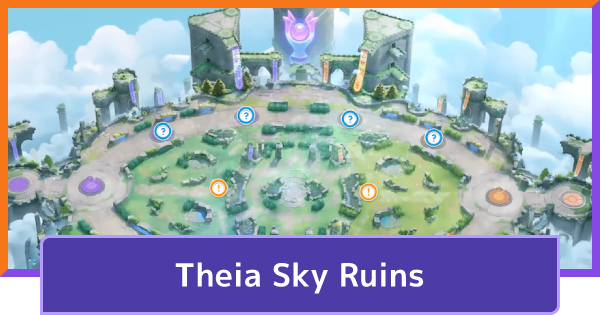 Theia Sky Ruins is now the latest main map in Pokemon Unite, replacing the previous Remoat Stadium map. While the basic map layout stays the same, the new map includes various new elements and adjustments that should make Unite matches considerably less predictable. The replacement of Zapdos with Rayquaza is the most significant change to the Theia Sky Ruins.

Previously, defeating Zapdos nearly always resulted in victory since it gives 50 points and temporarily removes the defenses of the other team's goal zones, on top of the double points mechanic making it easier to score 100 points that can turn the tables. Now with Rayquaza, it only grants players a strong score shield and enhances their goal-scoring speed. While this is still a significant buff, it will not allow teams to score instantly, requiring teams to be more strategic in the last minute of play.

You Can Only Score Points In Active Goal Zones

Score Points Gets Double At The Last 2 Minutes

All points scored in a Goal Zone are doubled in the last two minutes. You can take advantage of this opportunity to win the game by waiting and accumulating points before the two-minute mark.

Aside from Green Berries, watch out for air currents spawn in a specific location in the final 2 minutes of the game when Rayquaza spawns. Air Currents grants movement speed increase to anyone in its area, as well as for a short time after leaving.

Rayquaza Appears In The Middle Of The Map

Regieleki Appears In The Middle Of The Top Lane

Regirock Appears In The Middle Of The Bottom Lane

Regirock, Regice, and Registeel will occur at random in the middle of the bottom lane. If you kill either, all allies will be strengthened for a limited time. The effects of each wild Pokemon's buffs vary. Pokemon can appear twice in the same battle.

Random Wild Boss That Appears On The Bottom Lane

Berries Only Appears In The Front Goal Zones

Green Berries Can Be Found In The Middle Lane

If you take a Green Berry, your movement speed will increase for about 3 seconds. 2 Green Berries will appear on both ally and opponent side along the path towards the middle lane area near the Legendary Pit, so use it when jungling in the central area.

Four Jump Pads Are Located In The Middle Area

A jump pad is a mechanism in which a Pokemon is thrown after about 1 second of standing on it. Four regular Jump Pads are placed in the middle lane area so as to surround the Legendary Pit in a square. All jump destinations are near the Legendary Pit.

After 5 minutes from the start of the battle, a Super Jump Pad will appear on the base. Unlike regular Jump Pads, there is no waiting time after stepping on them. In addition, you can choose from 6 jump location destinations.