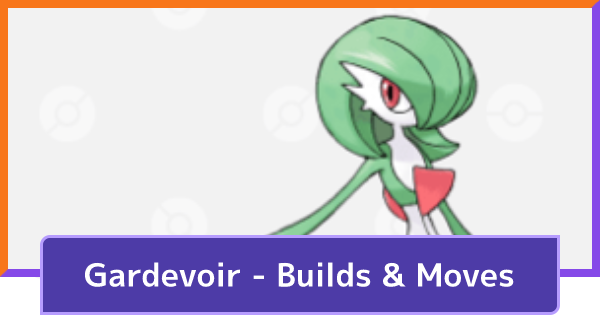 Gardevoir received major adjustments on the December 9th Patch, where its evolution levels & when it learns its movesets have been decreased. Gardevoirs stats have also been adjusted. These may help Gardevoir users dominate the match more without worrying about leveling up too late!

Gardevoir has a minor bug fix with the Enhanced Basic Attack's damage input during the September 22nd Patch.

Gardevoir has seen some minor adjustments in the August 18th patch. One of these was an auto-attack bug fix, while the other was a straight-up new effect added to its move Psychic. This might lead to Psychic seeing more play in the future.

Psyshock deals damage in 3 hits, and if you're able to land all of them, you'll be dealing massive damage to your foes. The key here is that you can move your character to adjust the position of subsequent attacks, so make sure not to miss out on this!

Psychic forms an aoe circle that damages foes at the end of its trajectory - as you can imagine, this pairs very well with Psyshock. It's of course possible to run Moonblast here instead if your team needs the stun, but for maximum AoE potential go for Psychic.

This build is essentially the same as the previous one, but it opts for Moonblast over Psychic. You'll lose a bit of damage from foes that linger in Psychic's AoE, but you will instead gain crowd control. If you're solo queueing, this might be the build to use.

The idea of Gardevoir in the jungle may put a lot of people off, but it is one very effective way of ensuring that you get the necessary experience you need to evolve, and fast. Gardevoir's biggest flaw is how long it takes to evolve, and how weak it is early game. This will solve that partially.

Gardevoir is not the strongest in the early game - it's honestly better to just reliably farm experience by taking out Pokemon than to engage in unnecessary fights. Rotate down to Drednaw at 7 minutes, but don't overstay your welcome - remember, you're more useful to the team the faster you can evolve into Gardevoir!

Go for Sp. Atk amping items - Shell Bell and Choice Specs work well. Equip Buddy Barrier for that extra shield whenever you use your Unite Move, or swap it with Score Shield to make sure you get some goals in.

This section has basic tips and tricks that you must know to effectively control Gardevoir. Treat this as a supplement to the Beginner's Guide.

This section is for those looking to up their play with Gardevoir. This is a supplement to the Advanced Players Guide.

Although Teleport is an excellent getaway move, we recommend getting the offensive Confusion first to contribute to faster clears.

After easing into the game, you'll find that even though you can deal powerful hits even at the earlier stages, your endurance is on the lower end. It can sometimes be better to save your Teleport as a getaway tool, instead of using it offensively.

You can also use Teleport to boost up Confusion to inflict more damage. This is effective when ganking enemies. Make sure to hide first in the nearby grass bushes to create and time your attack.

You'll get two powerful offensive moves once you reach level 6. Both work really well in inflicting area damage, but we've found Psyshock to be the stronger and easier move to use. You still won't have enough endurance to survive an onslaught at this stage, so try to limit your battles to 1 on 1 by checking the environment before attacking another Pokemon.

At level 8 you'll get a choice between Psychic & Moonblast. Psychic will leave an AoE circle that has the potential to do more damage than Moonblast, but Moonblast will provide you with a very reliable stun. It's your choice which you prefer, but ultimately it may come down to how risk-averse you are.

You can take advantage of Moonblast's ability to stun and incapacitate enemies by creating opportunities for your allies in team battles. You can also use this to set up for executing Future Sight or Fairy Singularity to make sure your targets won't be able to dodge or get away.

Psyschock Can Be Casted While Moving

Gardevoir can use Psyschock to aim at targets while moving. You can cast up to a maximum of 3 AoEs. You can immediately follow this up with your other move as it won't get cancelled. Once the AoE is casted, it can't be intercepted by enemies so its effective against enemy disablers.

This build will let you rain devastation on your enemies from relatively afar. If you're able to land all 3 hits on Psyshock, you'll likely deal lethal damage.

You can start team fights with Psyshock. This move's cooldown is reduced each time one of these attacks hits an opposing Pokemon. Follow this up with Moonblast so Gardevoir can move back and create distance while attacking. When the move's blast hits, it inflicts damage to opposing Pokemon in a cone and disables the opposing Pokemon nearest to the Gardevoir for a short period of time.

The delayed explosion on Future Sight can be tricky to land, so it's good to guarantee your foe can't move until it goes off. Moonblast is the way to guarantee this - lay down your Future Sight, then stun with Moonblast. (Future Sight also works well with Gardevoir's Unite Move as well!)

Fairy Singularity is an incredibly powerful move that will draw in all enemies into one concentrated location. This becomes more powerful the more coordinated your team is - if you're playing with people on voice comms, try to time your ults together for maximum effect. Needless to say, this is extra potent when fighting for Zapdos.

This section will guide you on which specific Wild Pokemon to target in order, as well as what to do at various stages of the game. This guide is basically based exclusively on jungle builds.

At the start of the match choose Teleport as your first skill since it can instantly moves you to a specified location. It can be useful as it can cross you over the barricade and into the central area quickly.

As of level 5, Gardevoir won't have evolved yet. Since your durability is still low at this point, we recommend you avoiding getting KO'd while supporting your allies from a distance. If your opponents get too close, use Teleport to escape.

Don't attack too much in the first battle against Drednaw let it drag on and aim to reach level 10. Once you've reached level 10, use your Unite move on a group of opponents and attack them all at once. Opponents whose movement is blocked by the Unite move will be bunched up and easier to hit with Psyshock.

Since Gardevoir has low durability and mobility make sure not to go alone. We recommend teaming up with your allies whenever possible to make it harder for the opponent to target you. In Zapdos battles, .

Pokemon Gardevoir Is Weak Against

How To Play Against Gardevoir

Pokemon Gardevoir Is Strong Against

Tips When Allied With Gardevoir