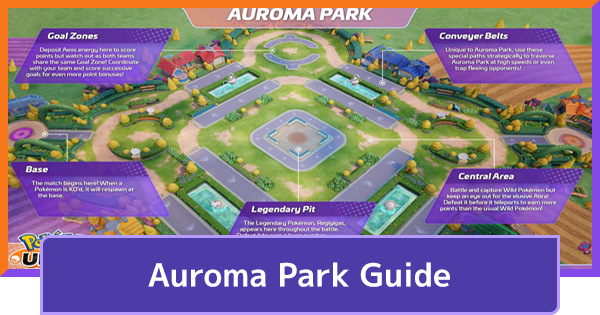 One Of The In-Game Maps

Auroma Park is 1 of the featured maps in Pokemon Unite. The map is based on a countryside-like area and includes its own set of Wild Pokemon and Boss Pokemon: Regigigas. It is accessible in Quick Matches only.

Auroma Park can only be played on the Quick Match mode, lasts only a total of 5 minutes, and has generally fewer goals than a Standard Battle Mode game.

In Auroma Park, teams are only composed of 3 players each. You can expect to see the same gameplay as regular matches, but with fewer players, only 1 goal zone for each team, and a 5-minute time limit.

Two Goal Zones Are Only Available

There are no Goal Zones that explicitly belong to one team on the map: you can score points in either of them freely!

If you score enough on one of the Goal Zones, a number will appear on it indicating the points will be doubled if another player tries to score.

Speed Flux Has Been Replaced By Dash Panels

Dash Panels have been added on the map as replacements for Speed Flux (which is seen in other maps). These can let you get around the map much faster.

Use The Dash Panels To Your Advantage

Dash Panels can be useful if you try to catch up to your opponent while they're low on health. It can also be used as an escape plan if you are trying to get away!

These are Wild Pokemon that can be found all over the map. They can be beaten quite easily and will give EXP and Aeos Points. EXP will level up your Pokemon while Aeos Energy will allow you to score at Goal Zones.

Defeating Regigigas Will Give You 50 Points

Upon defeating Regigas, it will give you 50 points if you dealt with the final blow. However, it does not seem to give you any other effects.