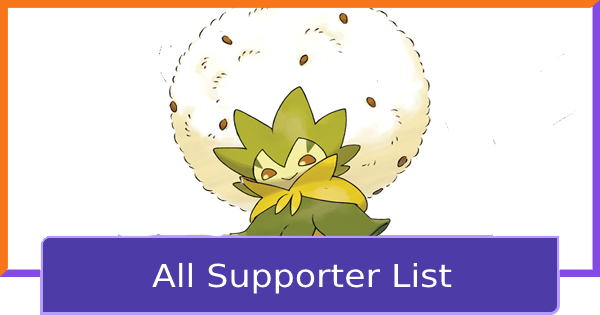 Sableye Spawns From The Shadows (New!)

Watch out for the shadows as Sableye is ready to gank its opponents in Unite with its arrival this November 16! Check out our guide below to learn more about its hidden powers and how you can wield them in the battlefield!

These are the actual Lv15 stats for all Supporter-type Pokemon without any Held Items equipped.

Supporters mainly buff/heal allies and debuff enemies, so being able to use their moves more often can help in many fights. Having more HP is also a great benefit, as it helps you stay alive in combat for longer. With that, they can stay in the field to aid their other teammates for longer periods of time.

Supporters need to be able to respond to debuffs or crowd control for them to effectively support the team when they are needed the most. Full Heal can work well in most situations, while Eject Button can also help with positioning. For squishier Supporters, Potion may let them stay a bit longer on the field.

Supporter Role - Lanes & How To Play

Supports would do well to head to the bottom lane in most games. Your support will be necessary when team fights happen, and in the current meta, it's very likely that a large battle will happen to contest Drednaw when it spawns - you'll want to be there for that!.

Which Wild Pokemon To Attack On The Bottom Lane

As a supporter type, we highly suggest that you choose the bottom lane and try to go for the middle Audino. Getting this will provide you with a lead over the enemy team.

While it's important to stick to a lane in the beginning phase, don't forget to check the minimap to be aware of the situation and be ready to provide a helping hand when the needs arrive. Pay close attention to key choke points and conflict zones.

Pokemon That Assist Other Pokemon

A Supporter is a Pokemon that assists other Pokemon by buffing them, healing them or causing debuffs & disruptions on the enemy team. They function more effectively when paired with other teammates to complete certain tasks that might be impossible alone.

Come With Some Crowd Control

Supporter Moves can heal / buff allies while some can debuff/push enemies. They can also affect the playing field (like Mr. Mime's Barrier). Knowing the characteristics of these moves is paramount to effectively support your allies.

Focus On Supporting Your Team First

The main goal for a Supporter is to enable your high damage dealer or other key roles to function better, which includes helping them stay alive. This is so that these core roles can grow stronger & effective to start tipping the tide of the battle to your team's favor. Think about how you can help your team better instead of just focusing on trying to do damage yourself and acting alone.

Most of the Support-type Pokemon Moves are the most effective when there are allies nearby. Thus, it is important to try to support your allies instead of acting alone.