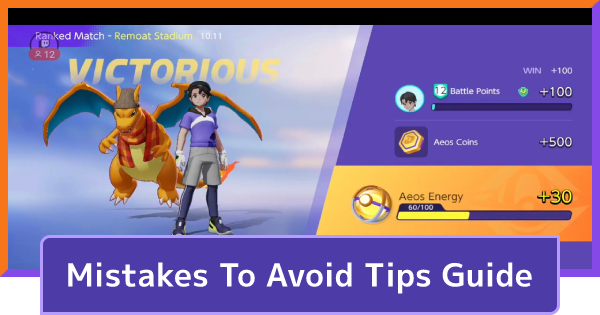 Check out these 9 things you should not do and mistakes to avoid in Pokemon Unite (Pokemon MOBA). Guide includes what not to do during battles, tips, team chat, Pokemon choice!

What Not To Do - Gameplay

Do not try to push forward in a losing battle. It's better to retreat and regroup with your teammates than try to battle solo. Remember that if you get KO'd, you will lose Aeos Energy and will need to wait to respawn. Also, you'll be giving the enemy team a lot of EXP which is detrimental to your victory. Fall back and level up before engaging.

Not Restoring Your HP

When going into battle, make sure you to always have full health. Going into battle with a reduced health bar already puts you at a disadvantage. Healing can be done from staying in any of your goals or by eating a Sitrus Berry.

How To Heal - HP Recovery Guide

After 5 minutes have passed, the jump pad near your base will become operational. This is a very quick way to recover HP, so recall back to base and then jump to a nearby goal using the jump pad. Keep your HP topped and jump back into the fray using this simple method!

Hoarding Too Much Aeos Energy

Having Aoes Energy is good, but hoarding too much is not recommended. Unscored points are not counted towards your team and are just waiting to be lost. The more Aeos Energy you have, the more you have to lose if you get KOed.

Choosing A Pokemon You're Unfamiliar With

When unlocking a new Pokemon Unite License, it's better to learn about their gameplay in a friends-only or CPU match. Do not try out a new Pokemon in a Ranked Match!

Familiarize Yourself With ALL Pokemon

Things can be bad for your team if you don't know what level an enemy Pokemon gets their respective power spike. By learning the level each Pokemon evolves or learn new moves, you can make better decisions on when to attack and when not to. Study every single Pokemon in order to maximize your success.

Not Paying Attention to Lanes

In most maps, there are 3 lanes which different Pokemon will need to take over based on their roles. Heading to a lane randomly without knowing the preferred lane for each Pokemon may cause confusion among your team. Check your menu to see the recommended lane for that Pokemon, and prepare to fill in the position for empty lanes.

Inform Your Allies Which Lane You're Going

During character select and while waiting for the battle to start, use the quick chat function to tell your party which lane you'll be going to. This will help coordinate with your team on which lane will be occupied by whom. This will greatly reduce the confusion when the battle begins.

Not Playing The Objectives

There are numerous objectives during a battle that all players should pursue to benefit their team. These include scoring goals, going after Wild Pokemon that give buffs/points/exp, or defending your own goals. Ignoring objectives will greatly hinder your team's progress, give free buffs to the enemy team, and eventually result in you losing the match.

Prioritize Drednaw During The 7-Minute Mark

Drednaw & Rotom will spawn at the 7-minute mark, and though both are useful, the current meta favors prioritizing Drednaw Try to immediately group up and defeat it after it spawns. It's ideal for players from the top lane to rotate the bottom during this time to secure it.

Important Things To Keep In Mind

What Not To Do - Others

It's better not to go on voice chat if you plan on ranting or calling out your teammates. This will not help your team and may even cause them to report you. Consistently being reported may also lead to other action being taken against you.

Players can end matches by going to the settings and selecting "Stop Battle". However, doing so will be treated as a defeat. Fair play points will also be deducted and, if they should fall low enough, you will receive a penalty.

Playing In Areas With Bad Connection

Even if you leave a game by disconnecting unintentionally, you will still lose Fair Play Points. To ensure that this doesn't keep happening, limit your play to areas where you know you'll have a stable connection.