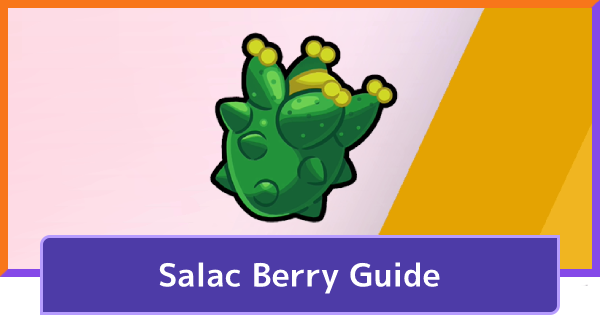 What Are Salac Berries

Salac Berries are green berries that spawn around the Legendary Pit or the center area of the map where the legendary Pokemon of the map spawns. These berries increases the speed of the Pokemon consumes it, making them move faster for a time.

Time Of Effect For 2-3 Seconds

During the BETA, used Salac Berries speeds up a Pokemon's movement speed for roughly 2-3 seconds. It's still unsure if the duration will stay the same in the Live Version of the game or there will be changes to the effects.

There are 2 Salac Berries that can be located at the center of the map around the Legendary Pit in Pokemon Unite. Unlike other Pokemon games though, you won't find them on trees as they'll be strewn about on the field for you to step on instead.

The extra boost in speed is great for Attacker pursuing a near-death enemy Pokemon. It's also good for Supporters who are being pursued as they can run away faster from enemies.

Found In Center Of The Map

Based on the BETA release of the game, Salac Berries were found in the middle lane of the Remoat Map. With only one map as basis, it's not guaranteed if it will always be in the center lane in the live version of the game.

Undetermined If It Respawns

Currently, it's not confirmed whether the Salac Berry respawns or not. Remember that it can also be used by enemies so ensure that you can deny it from them.