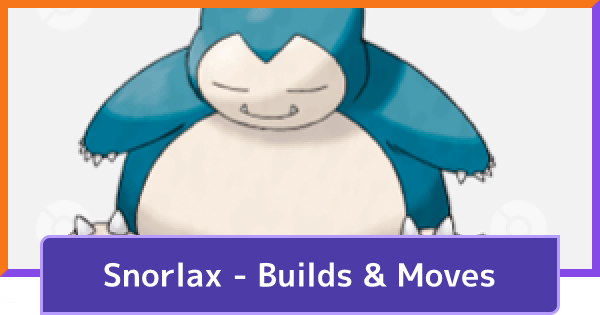 On the December 9th Update, Snorlax received major adjustments wherein the level of the moves learned have been adjusted to match the learning levels of other Pokemon. These changes may affect Snorlax's performance in the match.

Snorlax receives a minor bug fix to its Yawn move during the September 22nd Patch. Although this fix affects the move's effectiveness, there are no other changes made to Snorlax. This is unlikely to affect Snorlax's position as one of the best Defenders in the game!

Snorlax has received some nerfs in the August 18th patch, many of which were a long time coming. In addition to damage and HP recovery reductions, Block's effect will also see a nerf. To compensate, however, Flail seems to have received a buff.

Heavy Slam is a great move in both dealing damage and disrupting opponents as it makes them fall off their feet mid-battle. A lot of battles can get quite heated among several Pokemon at once, and this move deals the perfect mix of damage and disruption that could help tip the scales in your team's favor.

Block is a great choice in battle as it helps with crowd control. Use it to either defend your team from the onslaught of your opponents or block opponents from goals by shoving them away.

Snorlax is usually thrust right in the middle of battle in order to defend opponents, which is why Flail is particularly useful in these heated moments as your basic attack damage will increase in proportion to how low your HP is. This move is key to pummeling your opponents for a quick KO.

Yawn To Help Turn The Tables

Yawn is a great move as it puts surrounding opponents to sleep. This gives your team ample opportunity to turn the tables in a close fight. Do make sure to aim well as it's not a sure hit.

Yawn is a great alternative to Block for crowd control if you're not confident with using the latter as it puts surrounding opponents to sleep easily. Do make sure to aim well as it's not a sure hit.

You'll need to be able to take down opponents as you try to control the crowd, so utilize Heavy Slam for this purpose. It's a great move as it both deals damage and disrupts opponents by making them fall off their feet mid-battle.

Buff Up With Flail

Snorlax can turn the tables when it gets pressured with its Flail move. Use this move to increase Snorlax's basic attack and movement speed depending on how low its HP is at the moment of use. As you level up, this move becomes more powerful and its damage increases. When this move is enhanced, basic attacks that hit opponent Pokemon will also replenish the Snorlax's HP. Quite useful for close combat situations.

You can protect squishy Pokemon or ally goal zones from enemies attacking with Block. Snorlax creates a shield to prevent opponents from passing through the wall and shoves them if they run into it.

This section has basic tips and tricks that you must know to effectively control Snorlax. Treat this as a supplement to the Beginner's Guide.

This section has basic tips and tricks that you must know to effectively control Snorlax. Treat this as a supplement to the Advanced Players Guide.

Although Rest is an excellent move, we recommend getting the offensive Tackle first to contribute to faster clears. Pick up Rest at level 3 and recover any HP you might have lost then.

Low Attack At The Outset - Stick With Friends

You shouldn't struggle taking out Pokemon from Mid to Late Game, but you will find that your attacks are on the weaker side at the start. Avoid straight 1 on 1 fights with Pokemon & stick with your teammates so they can deal with the attacks while you defend them.

Snorlax certainly excels at surviving against their attacks - especially when on a goal. In the early game, focus on preventing enemies from scoring by standing on your goal and interrupting their casts. Remember that you get bonus defensive stats on the goal.

Snorlax's Tackle and auto attacks are actually quite effective in taking enemy camps. Pair up with an Attacker and aggressively move to the opponent's side to bully them and steal the Wild Pokemon and Berries on their side. This paves an efficient path toward doing a well early game, and as a result, helps you do even better mid-game.

Once you reach Lv6, you'll find your offensive capabilities improve enough to deal substantial damage to opposing Pokemon. You'll get Heavy Slam as your primary offensive move, and this will make combat easier for you in general, allowing you to move more independently. Keep sticking with teammates to primarily defend them though, but also try to get KO's and score with your team.

At level 6 you'll get a choice between Heavy Slam and Flail. Which one you choose will affect the direction of your build, so pick wisely. Although Heavy Slam is generally recommended because it both deals damage and throws opponents off their feet, Flail can increase your attack damage significantly when your HP levels are low - making it very useful when in a pinch.

This combo is great for both damage and defense. Heavy Slam both deals damage to all opponents in the vicinity and throws them off their feet, so start your onslaught with this move. After that, quickly follow up with Block to push your opponents away from you, prevent them from inflicting damage on you and your allies, as well as to push them away from a goal or particular area. Then, Heavy Slam should have cooled down already by the time Block's effect ends, so follow up with another hit.

This build is great for both maximizing Snorlax's crowd control capabilities and offensive qualities as you'll be able to up your basic attack damage, as well as put enemies to sleep. Use Yawn to stop your enemies in their tracks and render them motionless. Quickly follow with Flail to up your attack and start punching! Watch as they just stand motionless until they get KO-ed.

Yawn is a great alternative to Block for crowd control if you're not confident with using the latter as it puts surrounding opponents to sleep easily. Begin with Yawn to stop enemies in their tracks, then quickly follow with Heavy Slam to give them a powerful hit to knock them out!

Start off by increasing the Snorlax's basic attack damage with Flail before barraging enemies with basic and boosted attacks. Then use Block to push enemies and prevent them from charging in. You can use Block to shove enemies against walls to hinder them further and stop them from escaping Snorlax's grasp.

Snorlax's Power Nap performs amazingly in battle as it not only deals damage to opposing Pokemon in the surrounding area while throwing them off their feet, it also gives Snorlax immunity to hindrances while restoring HP continuously. Note that by pressing ZL a second time during the move, you'll trigger a follow-up motion of Snorlax rolling over to one side - dealing additional damage to the opponent next to him.

Use Block To Disrupt Enemy Positioning

Block will be an absolutely crucial move for Snorlax in the late game, especially when it comes to taking objectives. Use the move to push your enemies away from an objective or goal to let your team cap it.

As Rest is a healing move, taking Tackle first greatly helps in clearing the first few Wild Pokemon. You can KO the 3rd and 4th Aipoms at the same time so you can advance faster to the middle of your lane. As Snorlax is a Defender Pokemon and the necessity to gain levels isn't that high. With that said, best leave the last hits to your lane ally.

Snorlax's offensive power is quite strong during the early parts of the game. Take advantage of this and pressure the enemy team and take their Wild Pokemon for XP or plop some score in. With Rest, Snorlax can heal itself so leave the Yellow Berries to your ally instead. Use Sleep either inside your goal or inside bushes so you can safely maximize the move.

Heavy Slam allows Snorlax to drop down with excessive force on a designated spot, sending enemies to the air and disabling them momentarily. Use this move during the Drednaw fight to create an opportunity for your team. Afterwards, place yourself at probable escape routes and use Block to prevent enemies from escaping.

Snorlax's Unite Move, Power Nap, continuously damages enemies around it for 5 seconds。You can use this during the Zapdos or Drednaw fights to ward off enemies, allowing your team to have a greater chance of securing the last hit.

Pokemon Snorlax Is Weak Against

How To Play Against Snorlax

Pokemon Snorlax Is Strong Against

Tips When Allied With Snorlax

Keep in mind that after the upgrade, Flail's HP recovery can only be activated once Snorlax has hit the opponent while its HP is at 25%.