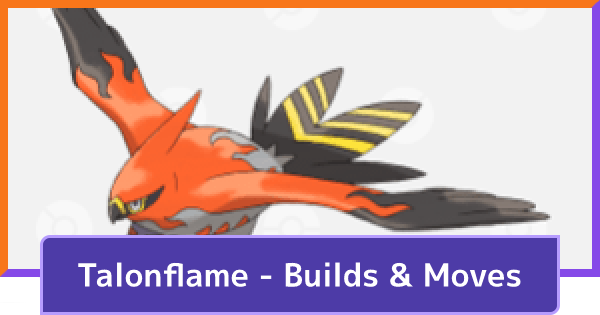 There have been some changes on Talonflame's moves from the December 9th Patch Update where Aerial Ace's cooldown & Fly's movement speed effect were decreased.

Talonflame is set to get a small bug fix on the October 20th Patch. Though not a significant change, this should be an overall positive for the Pokemon.

Talonflame received minor changes during the September 22 Patch. Its attack was increased and the cooldown on Fly has been reduced - while the movement speed mid-air has increased. Talonflame's Flame Sweep gauge collection time has also been adjusted. Overall, this has been a positive patch for the bird Pokemon.

Talonflame has seen a lot of changes in the most recent patch, most of which are buffs! Acrobatics' cooldown was increased from 6s to 8s, but its attack was raised to compensate. Additionally, Aerial Ace and Fly both saw a buff.

Flame Charge's movement speed boost is great for Talonflame, as you'll want to be as mobile as possible. Its upgrade effect also allows it to ignore enemy Defense, which is quite useful when facing off against bulkier opponents.

Although Fly has its advantages, Brave Bird is also a powerful option. While Fly will make you untargetable briefly, its travel distance is not as significant. Brave Bird's range will let you engage and escape as necessary. The reset on your Flame Charge cooldown (after using a boosted attack) is also incredible for chasing after Pokemon.

Take To The Skies

Fly has a few advantages over Brave Bird, with the main one being that you can become untargetable. Talonflame is rather squishy and in serious danger of being taken out by Attackers or other Speedsters, so having this in your back pocket can be a huge help. Fly can also be used to jump down and steal last hits on major objectives!

Aerial Ace's main advantage over Flame Charge is that it turns your next attacked into a boosted one. If you plan carefully, you can hit a boosted attack, Aerial Ace, then boosted attack again for huge damage.

Aerial Ace will require you to have a target to charge to - it is not a free dash like Flame Charge. For this reason, this build is best picked in situations where you don't anticipate needing to escape from fights. This build will give you more overall assassination potential.

Brave Bird Is The Way To Go

This build prioritizes getting in and destroying a target, so the higher damage of Brave Bird will be preferable. This will invariably result in more damage taken on your part, so be careful.

This section has basic tips and tricks that you must know to effectively control Talonflame. Treat this as a supplement to the Beginner's Guide.

This section is for those looking to up their play with Talonflame. This is a supplement to the Advanced Players Guide.

Although Peck has a slightly shorter cooldown, you'll want to get Acrobatics first, purely because you should use it to get over the initial wall to reach the Lillipup. If you don't do this, you can always use your Eject Button to hop over the wall. This is less than ideal, however.

The above route will get you both buffs and nearly to level 5 very early. Adjust which Crawdaunt you kill when you decide what lane to gank first.

A Note On Buff Pokemon

Once you've got your Bouffalant Buff and are level 5, head over to an available lane and attempt a gank. Don't overextend or fight on top of the enemy goals unless you're sure you can get a kill! Try to get the jump on an overextended enemy with Acrobatics.

Get To Level 7 Quickly

Level 7 presents you with a new move option in the form of Brave Bird or Fly, which will give you a huge boost in damage. You'll want to prioritize getting exp here - don't waste too much time sitting around in lanes. If your teammates are struggling, help them out, but don't be overly aggressive.

What Move To Choose At 7?

Fly is an easier to use, safer alternative to Brave Bird, mainly because you will become untargetable immediately upon pressing the button. Then, you'll have a short window of time when you can maneuver away from battle. If you find yourself struggling to get away and dying easily, try giving Fly a chance. You can freely choose between Aerial Ace & Flame Charge as your secondary ability if you're going for Fly, as both work well with it.

At the 7 minute mark, Drednaw will spawn on the map. It will be very important to relocate to this area and try to get it alongside your team. If things should go poorly, however, it's important that you're ready to attempt to steal the last hit. Fly can be great for this purpose, as it makes you untargetable as you approach. This is a last ditch effort however, so don't rely on it.

Take Out Squishies Near Zapdos

In the late game, you'll almost always have a confrontation with the enemy team at Zapdos. It can be tempting to fight Zapdos head on, but this is best left to your bulkier All-Rounder and Defender teammates. Instead, hang around the edges and wait for enemy squishies to approach. Then, use your high mobility to jump in and eliminate them.

Use Dashes To Flee

Talonflame's greatest advantage is its incredible mobility. All 3 of its abilities provide some sort of movement. This movement can help you not only engage in fights, but get away from them. Try to always keep your escape in mind!

Talonflame's incredibly powerful Unite Move Flame Sweep isn't there just to kill your foes. It also has a component of the attack that pushes back every Pokemon hit a significant distance. Use this in teamfights to move the entire team away from a goal, allowing your team time to score. Save Brave Bird for your escape after this.

This section will guide you on which specific Wild Pokemon to target in order, as well as what to do at the start and end of the game. This guide is based exclusively on a jungle build.

First and foremost, consider taking Acrobatics as your first skill. This move will let you jump over the initial wall to reach Lillipup faster!

When fighting Wild Pokemon, we recommend trying to get the last hit with Acrobatics from a distance. Also, if you can coordinate your attack well with your allies, you can take advantage of Talonflame's high mobility to score at the enemy goal.

We recommend stay far back as possible in group fights (which of course includes Drednaw battles). Always target opponents whose HP is low and also check Drednaw's HP frequently during the fight. When its HP is low, use Fly to get the last hit.

Talonflame's Unite move unlocks at level 9. Its cooldown is very short, so use it aggressively to KO your opponent. Due to Talonflame's low defenses, we recommend avoiding 1v1s with opponents who have a lot of HP, use Fly to escape and when you're running low on HP and return to base to recover.

During group battles against Zapdos, try to avoid being surrounded by multiple opponents. Also, if your allies are defeated and you're at a disadvantage, refrain from fighting and just hang around, waiting to use Fly to get the last hit on Zapdos.

You can also use your Unite move in the corridor next to the Legendary pit to force your opponent away from Zapdos if they try to get the last hit.

Pokemon Talonflame Is Weak Against

How To Play Against Talonflame

Pokemon Talonflame Is Strong Against

Tips When Allied With Talonflame

This is too overpowering, it should receive a nerf.