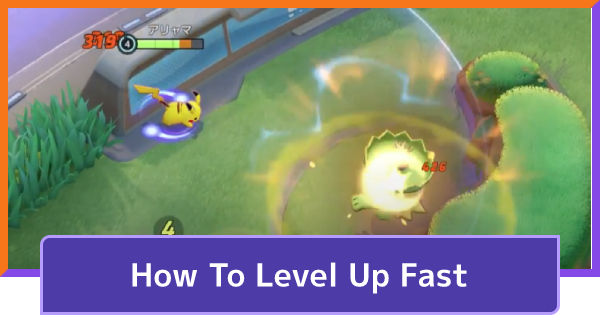 Check out this how to level up fast guide in Pokemon Unite (Pokemon MOBA). This includes best EXP farming methods, how to get EXP fast, priority Pokemon, Wild Pokemon locations, and more.

How To Level Up Fast / Best EXP Farming

Applies To Both Wild & Opposing Pokemon

This EXP mechanic is also applied when defeating enemy team Pokemon. If you don't really need the EXP, try not to kill steal from your teammates who need to level up more than you.

The most common way to gain EXP is by farming the Wild Pokemon found around the map. You can find them in most parts of the map. They have a set spawn location making it easy to create a farming route.

The cluster of Pokemon around the Drednaw spawn area in Remoat Stadium is one of the best places to farm for EXP. The plentiful Audino, Vespiqueen & Combee there will make it very easy to level up.

Some Pokemon Give Higher EXP

There are some Pokemon that naturally give more EXP than others. You can identify them by the number above their nameplate. Generally speaking, the higher their hit points are, the more EXP you'll get.

Drednaw is one of the boss Pokemon that will spawn in Remoat Stadium. When defeated, it will give all the players on the team that defeat it a huge amount of EXP. At the early stage of the game, it's likely this will be enough to level you up!

Only Applicable In Remoat Stadium

Note that Drednaw only spawns in the 5v5 map Remoat Stadium. It's located at the lowest ridge of the bottom lane near the very center of the map.

4. Scoring Points At The Opponent's Goal

Scoring will also provide you with a little bit of experience as well! During the final 2 minutes of a match, your score and EXP gain will double.

EXP Share is a a valuable Held Item particularly for Supports, since you'll find yourself being the lowest exp person on the team!

Get Stronger As You Level Up

Leveling up increases your overall health, allowing you to take up more damage before being KO'd. This is a must especially towards endgame when enemies hit harder.

How To Play Tips & Guide

Being Lower Level Puts You At A Disadvantage

When fighting against enemies, level difference matters. Being at lower level puts you at a clear disdvantage as they can hit harder and take on more damage. Do not fight against an enemy that is 2 levels above you.

Some Pokemon Evolve When They Reach Specific Levels

Some, but not all Pokemon can evolve when they reach specific levels. Evolution level and the number of evolution stages depend on which Pokemon you are using.

Evolution Guide - How To Evolve

New Moves Unlocked When Leveling Up

Another benefit to leveling up is that you can unlock new moves! Same as with evolution, the levels at which you get new moves and what type of moves you can get also depend on the Pokemon you have.

Passive EXP Throughout The Match

▲The EXP bar around the player's level increases every second.

Players gain passive EXP at a constant rate throughout the game. Despite the fact that it is not much, it will help you in closing the gap between you and the other players in the game.

The yellow EXP in the player's level is the passive EXP obtained when your Pokemon is one level before evolving. But having this EXP won't let you actually level up and evolve your Pokemon, you'll need to get a list hit to do this.

Pokemon without an evolution (such as Lucario) will receive passive exp normally, but do not have a yellow indicator, as they do not evolve in-game.