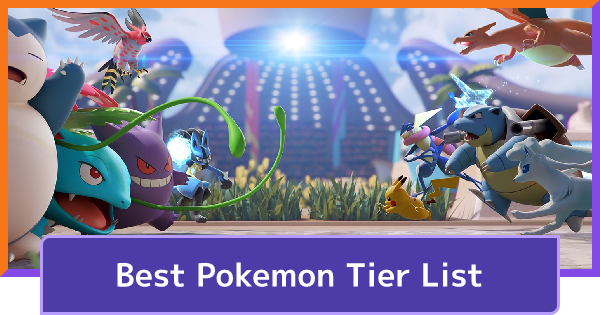 A new Defender-type Pokemon has been added to the game alongside the Halloween Event on October 20th. The squirrel Pokemon Greedent has a very powerful Unite Move that works excellently in combination with its moves to deal huge damage - we've tentatively assigned it an A Rank!

What Rank Do You Think Greedent Is?

What Rank Do You Think Sylveon Is?

What Rank Do You Think Mamoswine Is?

What's Blastoise's Rank For You?

Care to see how other players are performing in their games? Want to see how some of these top Pokemon perform in action? Every day on our Twitter account, we put out a video showcasing the skillful, interesting, or just plain funny plays that players like you pull off! If you don't want to scroll through Twitter, we've compiled the videos in an article below:

Play Of The Day Compilation

※ Most changes here are due to the addition of a new lower tier.

※ Click or tap on a Pokemon to jump to details below.

State Of The Meta

The current meta favors Attackers and All-Rounders in the jungle over Speedsters. Due to relying on melee attacks and being somewhat fragile, Speedsters have fallen out of favor, but it's possible that the newest balance update (as well as some of the newly introduced items) will bring some change to the current meta.

Check Out The State Of The Meta & Builds For Ranked

In the current meta, Greninja is king, seeing a lot of play in the Jungle as well. Auto-attacking physical Attackers are being favored, but Special Attackers like Pikachu and Alolan Ninetales are still quite powerful. Venusaur's recent buffs could potentially lead to an overall rise in its rank/performance!

All Defenders are in a pretty good spot, with Blastoise being the crowd favorite, due to its incredible damage. The other four are also in a good place and see play in many matches - a Defender is always considered an asset to their team, making it hard to go wrong when choosing them!

Eldegoss's healing potential has let it keep its top power, but Wigglytuff is slowly advancing. Although its damage was nerfed recently, the pink slapping menace has been seeing more action. However, some would say it's being played closer to a Defender than a Supporter.

Speedsters are fun and powerful Pokemon that have a great influence on the early stages of a match. However, they are falling out of favor due to the prevalence of Attackers and All-Rounders in the Jungle. Speedsters' melee attacks and low durability are somewhat of a liability in the late game. That being said, it's still very possible to carry on them!

Unfortunately for the other All-Rounders in the game, Lucario exists. It reigns supreme in this camp, with incredible mobility, power, and objective snipe potential. The other Pokemon are also quite viable, but simply fall short when compared to Lucario. Note that many All-Rounders are played in the Jungle in the current meta.

What's Best For Each Lane?

The Tier Lists below rank what the best Pokemon are for each respective lane. This is crucial, as different roles can go to different lanes. Knowing what Pokemon are strongest in a lane can help you fill that lane for your team, so make sure to stay knowledgeable about more than just one role!

Note that the tiers below are not meant to match up with the overall Tier List. They are intended to let you know which Pokemon perform best in a given lane. Pokemon in the C Tier, for example, would best not be used in that particular lane.

Best Pokemon For The Top Lane

Defender Pokemon tend to take the top lane, as they can hold it very well even if their lane partner should temporarily leave. Blastoise and Snorlax are perfect for doing this. However, it's more than possible to have any Attacker up in this lane as well. Speedsters are overall not well suited to this lane.

Best Pokemon For The Middle Lane

Although most people may associate the middle lane most with Speedsters, it's actually Greninja and Lucario that are most dominant there. In second place are the Speedsters - these Pokemon have great potential and mobility and benefit greatly from the middle lane's experience. In third place are often the other All-Rounders, who scale very well with leve.

Although it's not impossible to succeed with them, we don't recommend taking the Pokemon in the C Tier into the jungle with you!

Bottom Lane benefits from having a Supporter, and this tends to be either Eldegoss or Blissey (although Wigglytuff has been extremely common as well). Their partner should be a Pokemon that can spar well and that benefits from getting exp. Speedsters are not recommended here, as they'll have a hard time doing what they're best at.

This Tier List has been updated to reflect the state of the current high rank meta. This meta tends to revolve around teamfights at objectives and sniping Zapdos, so we've placed importance on Pokemon that excel at those roles.

Eldegoss, Talon, Machamp into A tier, Pikachu Venusaur, Mr.Mime and Crustle into S and the list is more appropriate for the Current Burst-Meta at least in Masters 2k+. Choice Specs, Razor Claw and move buffs like Fly and Petal Dance can be clearly seen as catalysts here.

Garchomp on C tier? No way! I think it should be on S tier, because of its lethal unite move. Also, Earthquake and Bulldoze can hit all opponents near.

zeraora, gengar and pikachu on s tier? no way. greninja and cinderace should be on s.

nice although I think Cinderace is a bit more s cl***. make sure to add a c cl***! Thanks for the info.