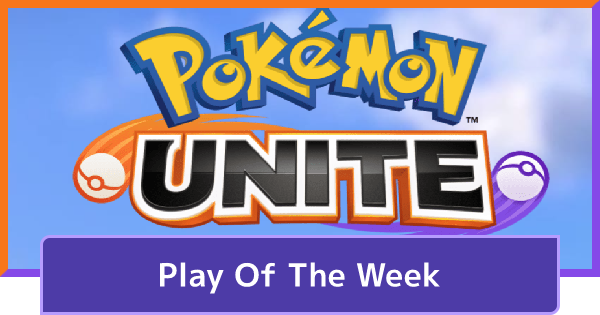 Check out the Plays of the Week in Pokemon Unite (Pokemon MOBA) for the week of October 11th. Find out some of the best and most interesting plays from Unite content creators!

Play Of The Week

Another week, another set of exciting plays from the myriad of talented Pokemon Unite players all across the world. We've gathered 3 clips from various popular streamers and ranked them for your entertainment!

This is by no means an exhaustive or objective list - these are only some of the plays that caught our attention this week. Have other plays you want to sure? Show them to us ⬇in the comment section below, and they might even be featured on a subsequent episode!

We've provided links to all creators featured here, but do note that some of their streams may contain explicit language.

Play Of The Week - 3rd Place

The number 3 play of the week goes to Twitch streamer GosuEzPz, with his clutch game-winning Blastoise ultimate! But, he just pressed R, you might say. Not quite! Read on below to get some more insights on this surprisingly close match!

Background To This Play

Although the early game went relatively well for Gosu's team (grabbing the first 2 Drednaws), the enemy managed to pull off a surprising last-ditch effort to get the 3rd Drednaw! This spawned at 2:16, and was successfully taken down by the enemy team with but one second to spare. This risky play gave the enemy team a much needed boost right before the final Zapdos fight.

↑ While Gosu's team is guarding Zapdos, the enemy Blastoise backdoors to score a massive 100 points.

The enemy team, seeing that Gosu and co. were guarding Zapdos, chose to send a few members to do some backdoor scoring. In addition to Blastoise's 100, Lucario also scored nearly 50 at a later point too.

Although this may seem like a standard Blastoise Unite Move, this clip really demonstrates the higher level of awareness and play of high rank players (Gosu is currently sitting in the 2300s).

First, Gosu knows that activating Blastoise's ult and then immediately using the Eject Button lets you flash and reposition very quickly, catching enemies off guard. This is a clutch move that all Blastoise players should master.

Secondly, it's not just about spamming the Unite Move - it's about using it at the exact right moment. Gosu manages to get his off before the enemy Blastoise - this meant that his team wouldn't be CC'd and could successfully get the last hit on the Zapdos. A few milliseconds later and they would have likely lost.

This match was decided in a surprisingly narrow 86 point lead. Though it can be said for most matches that failing to get Zapdos will result in a loss, this game was particularly close. What's more, the enemy team deserves commendation for successfully scoring so much despite losing Zapdos.

Muscle Band on Blastoise may seem like an odd choice, but it's really not - it's especially helpful for the Jungle build that Gosu runs. This item is incredibly powerful, giving you increased damage and attack speed, thereby proccing your 3rd enhanced auto attack more frequently. This speeds up your farm more significantly than other items.

The Buddy Barrier is practically mandatory, helping out immensely in teamfights, such as the game-winning one featured in this clip.

Play Of The Week - 2nd Place

Our #2 play is none other than Pokemon Unite creator PeekMP. In this particular MATCH, Peek is running what he affectionally termed the Girl Scout Build - a rather unusual setup for Greninja that sees it run the Aeos Cookie, coupled with the Attack Weight. But, in addition to cookies, this build also brings pain. (Provided you stack the items up sufficiently in the early game!)

After being dived by a Charizard, Peek Eject Buttons away, only to be ambushed by a Zeraora. Without a moment's hesitation, he Unite Moves away to safety (a reaction speed which he, a staunch supporter of the Mobile version, would no doubt say is not as easy to pull off on the Switch).

Landing behind enemy lines on top of an unsuspecting Eldegoss, he immediately Water Shurikens it down, recovering health in the process. His Buddy Barrier's shield seems to dissuade the nearby Lucario and Machamp from attacking him, and he's able to dispatch them from behind. All that's left is to take Zapdos for the win!

Peek's build, though somewhat of a meme, is one that's fundamentally based around scoring to increase your stats. Though not easy to do, if you can score, you'll get double benefits from the Attack Weight and Aeos Cookie. Stacking HP also makes for a much tankier Greninja than you might expect - no doubt he wouldn't have survived that Zeraora's attacks had he not stacked up that Cookie!

Play Of The Week - 1st Place

1st place in this week's Play of the Week comes from none other than Unite streamer GoofGG. The above clip comes from a day when he was playing with a pick-up team in a tourney, mostly covering Attacker roles (primarily Venusaur, with the occasional Sylveon).

Background To The Match

To put the above play in context: Goof's team was having a very difficult early game. They had lost the first Drednaw spectacularly, with the enemy Venusaur quickly becoming a fed menace. To make matters worse, they also lost the subsequent Rotom fight, resulting in their top goal getting destroyed.

The above play may not seem like anything special at first glance, but it was arguably the reason they were able to come back and win this game. Goof positioned himself very carefully, not rushing into battle against the dangerous Venusaur 2 levels above him. Positioning wasn't the only reason this fight was won, however.

Goof timed his Unite Move very precisely, dodging Venusaur's Giga Drain, denying it not only the HP recovery, but also the damage reduction component of the move. This precise timing allowed Goof to go in for the kill, with an expertly-angled Hyper Voice that hit at the absolute ideal max-damage range of the attack.

And, just to further cement his contribution, Goof also proceeded to get a KO on the enemy Sylveon as well, leaving only the enemy Lucario up to contest Zapdos.

Goof's build here is a rather standard one for Sylveon in terms of items - he has one item for damage, with the other two being for survivability and team fight presence. Choosing Calm Mind over Draining Kiss likely comes down to wanting the extra movement speed, on demand stats, and at level 12, the ability to negate the damage of one enemy move entirely. As this clip demonstrates, negating the effects of even just one key enemy move can turn the tide in your favor very quickly.