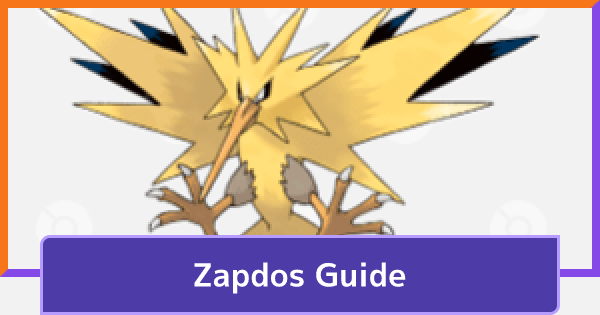 Replaced With Articuno During The Holiday Event

During the Holiday Event in Remoat Stadium (Snow & Ice), Zapdos is replaced with one of the Legendary bird: Articuno for the duration of the event to match it with the theme, though the same effects still apply.

Zapdos has received a minor nerf in the most recent patch. The player who KO's Zapdos will still get 30 points, but the other 4 teammates will get 15 instead of 20 points. This lowers the total points Zapdos gives from 110 to 90, though since points are doubled in the last 2 minutes, this is effectively 220 to 180, resulting in a 40 point nerf. Perhaps this will make Zapdos comebacks less effective?

Zapdos - Effects & How To Beat

Defeat To Get Instant Scoring Buff

Zapdos is a legendary bird Pokemon that will show up once in the final two minutes of every match. Defeating it will give you points and cause scoring on enemy goals to be instant cast for 30 seconds. Zapdos can only be defeated once and does not respawn on Remoat Stadium. It will, however, respawn on Mer Stadium.

Additionally, upon defeating Zapdos, the person who got the final blow will get 30 points, while the rest of their team will gain an additional 15 points! These points will be added to your Pokemon and need to be scored just like normal - they won't automatically be added to your score. Remember that these points will also be doubled (as this happens during the final two minutes).

The only thing that matters for capturing Zapdos is dealing the last hit to it. It doesn't matter which team deals the most damage, meaning it's very possible for you to steal it away from another team.

Should Be The Primary Objective Of Your Team

Zapdos provide a lot of points and useful buffs to the team that captures it. Thus, it is important that the players treat it as a primary objective that your team should try to take, or at least preventing your enemy from getting their hands on. Otherwise, you may see victory snatched away from your hands.

Damage Reduced If Drednaw Is Killed

It used to be the case that if you killed Drednaw before the 2:00 time mark, your damage to Zapdos would be reduced by about 55% for 90 seconds. This caused it to be very difficult for you to secure the last hit on Zapdos.

The Damage Debuff Is No More! New!

In the latest patch, the damage debuff for Zapdos has been removed and you won't have to worry about killing Drednaw before the 2:00 time mark later in the final stretch.

The current meta is entirely based around winning the final battle for Zapdos. To do so, you'll want to see what kind of Pokemon top players are running in higher ranks. We've compiled a list of the Pokemon used by the 100 top-ranked players so you can have a better idea of what to expect & what to run! Check out the link below for details.

Found In The Middle Of The Map

Zapdos spawns in the very center of the map, the area known as the Legendary Pit. This is a highly contested and somewhat narrow part of the map. Highly Mobile Pokemon like Speedsters should come here occasionally to check enemy movements or signs that they're trying to take Zapdos

Zapdos will spawn exactly at the 2 minute mark during every match. It marks the final phase of the match, where all points are doubled.

Icon Shows Up Upon Spawning

You will know when a Zapdos is on the map by the icon that will show up on the central area. It suddenly disappearing also means that it has been defeated.

Beating Zapdos Should Be A Team Priority

With the benefits that Zapdos gives upon being beaten, it should be every team's priority to defeat Zapdos. Remember that the enemy can easily benefit from it as much as you could.

Save Your Unite Move For Team Fights

A team fight will likely break out around Zapdos' area. When you're approaching the final two minutes, temporarily refrain from using your Unite Move. There's a large chance that it will come in handy when fighting in the confined quarters of the legendary pit in the middle.

Zapdos Is A Game Changer

It's no exaggeration to say that the team who gets Zapdos most often wins the match. This is because the instant score buff, coupled with the 110 points (220 if scored) given to the team, can be more than enough to turn the tide of a battle. It's imperative that you always think about your late-game Zapdos plans.

Do Not Engage First

One strategy is to play safe and wait for the other team to engage Zapdos first. Besides damaging Zapdos for you, your team can ambush the enemy while they are preoccupied fighting the Legendary Bird.

Be Ready To Strike While Your Enemy's Away

Judge the state of battle and see if any enemy is going after Zapdos. If they're not, engage against Zapdos, but make sure to always have backup just in case they do come for it. Either way, aim to get the last hit on the Pokemon.

Get Points From Wild Pokemon Then Head To Final Goal

If you have time before the match ends, clear a few wild Pokemon to get points then head to the goal to insta-score them. Just be careful as being KO'd here will cause you to lose points and be sent back to spawn.