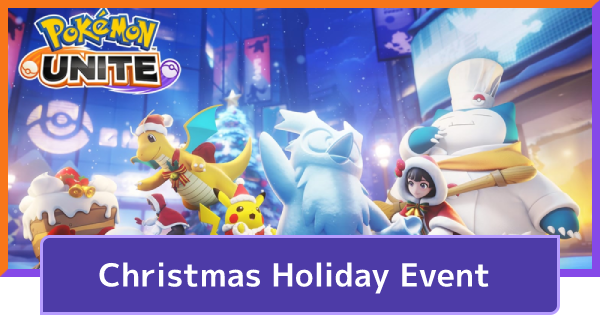 The Holidays have come to Pokemon Unite! Starting Friday, December 9th, players can expect to have a new larger-scale event featuring various updates, including skins, trainer clothing, and even a brand new Pokemon! Note that many aspects of this event will only continue until next year, so hurry!

※ Click or tap the name to jump to the events below.

One of the most exciting additions to the Pokemon Unite roster is the new Pokemon Dragonite and was announced to be released on December 20! This Generation 1 Dragon-type Pokemon will be joining us for the Holidays this year, so get ready for some more action!

The Commemorative Event Rewards lets you obtain Aeos Ticket once you logged in to the game. You can also get Tsareena's Unite License once you've logged in after the December 9 Update.

New Holiday Christmas-themed skins will also be added in this update, specifically for the likes of Cramorant and other Pokemon as well. In the trailer, skins for Pikachu, Crustle and Snorlax were shown too.

New fashion is coming not just only for your Pokemon, but for your trainer avatar as well! A witch's hat, candy bag, and other spooky seasonal items will be available to obtain in-game! Note that many of these will also be limited-time only.

Further ways to customize your character's profile, including a frame, sticker, background, and pose, are going to be added.

Winter has frozen the Battle Arena! The usual wild Pokemon in the area has been replaced by cute penguin-like creatures and Snowbears with the Snow and Ice version of the Remoat Stadium!

Select the holiday tree in the lobby to engage in daily tasks and challenge missions as part of the Illumination Challenge. Players may collect bulbs to light up the festive tree and get exciting gifts like such as Trainer picture frames and backdrop, a 1-day limited license, Trainer fashion items, and more by completing these objectives.

Pokemon Unite gets a new Quick Battle map called Snowball Battle In Shivre City! Opponent Pokémon who are knocked out will temporarily transform into immobile Snowmen. During this state, the normal basic attack causes it to leap into the air, and its moves cause it to make various stances like cheering, waving, and giving a thumbs-up. When a Pokémon's snowman form expires, it will spring free of the snow and resume fighting.

Snow Much Fun With The New Photo Challenge!

Collect as many snowflakes as you can to complete the shot and receive rewards! Players may acquire snowflakes by participating in Standard Battle, Quick Battle, Ranked Match, and Snowball Battle in Shivre City.

Snowflakes are the materials needed to unlock the Photo Challenge shots and to receive rewards! Collect them now to get new outfits!

Snowflakes Guide - How to Get & Uses

This first few days in January, you will be able to play all Pokemon including the new Dragonite character! The free Trial License will be available so make sure to try them out to make your mind before purchasing them later.

Log-in daily to get unique rewards and prize boxes during the holiday event period. Tons of prizes will be given away so make sure not to miss a day!

This coming Christmas, a prize package containing a 7D limited license for six Pokemon to choose from will be offered. Players may also get Aeos Coins, Aeos Tickets, or Item Enhancers from these special Prize Boxes.

The next gift awaiting all Pokemon Unite players is a Limited License Prize Box which contains a 7-day limited license for one of six Pokémon of the player’s choosing. You can use these limited licenses to test out the Pokemon you want before purchasing.

Lastly, the New Year's reward box allows players to choose one of four rare Trainer fashion pieces! This is a one-time limited event so choose wisely.

The most recent Patch Update limits some of the existing Pokemon from "reigning" in the current Meta, including Lucario and Greedent, who had their stats "sleigh-ed" down while others received bug fixes in the previous 10-hour maintenance. Check out the link below for more information!