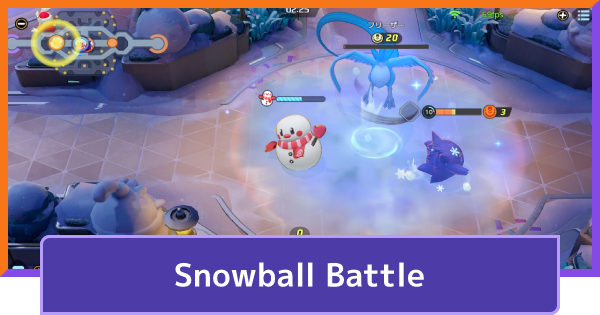 Along with Snorlax's newfound blocking power with Cook Style, there has been a change in the current battle items in the Snowball Battle. A few new ones were added recently, here's a sneak peek at the following new items:

Now you can call out your team when you use the Unite Ball Charger. Check out the list of other battle items here.

Needed For The Illumination Challenge

Participating in the Snowball Battle In Shivre City is needed to complete the various missions in the Illumination Challenge. The Illumination Challenge is an event held for Christmas from December 15, 2021, to January 16, 2022 (a total of 32 days). Here you'll be able to earn lights and claim rewards while the event is still up.

Participating in Snowball Battles in Shivre City helps the players to collect Snowflakes faster. These are limited Quick Battles and gives the highest snowflakes of 30 compared to all the Quick Matches out there.

When playing Snowball Battle mode in Shiver City, there are several things that you might find different from the regular Shiver City map.

The usual Yellow Berries that appear on the side paths won't be there to provide HP recovery.

You won't be able to use the usual Battle Items in the Snowball Battle in Shiver City. Although Special Battle Items can be acquired by hunting down wild Delibirds. A gift box will appear once you knock them out. These transform into special battle items that are only available during this event.

Snowman & What You Can Do

Turn Into A Snowman When KO-ed

In this map, all players both your teammates and enemies will turn into a Snowman when KO-ed. While you're a Snowman, the buttons used for your moves will be turned into specific motions and poses you can try as you wait for your respawn.

▲The KO'd Pokemon is using the Attack (A) button to jump.

When transformed into a Snowman, you won't be able to move nor attack although you can do several actions. The normal basic attack allows it to jump and while the normal moves are replaced by different emote expressions like cheering, waving, and giving a thumbs-up.

When pressing R button or Move 1 button, the snowman looks at the camera while closing its fist to show that it's rooting for the allies.

When pressing ZR or Move 2 button, the snowman tilts a bit like it is posing to the camera.

When pressing ZL or the Unite Move button, the snowman giving a thumbs up to the direction its looking at.

Articuno Instead Of Avalugg

The wild Avalugg that usually appears in the Shivre City map is replaced with Articuno for the Snowball Battle! It first spawns after 2 minutes have passed since the start of the match, and will respawn 2 minutes after it gets KO-ed. If you KO Articuno, you'll receive the following effects: 1) your allies will gain 15 Aeos Energy, 2) the opponents you hit in range will be frozen for around 2 seconds, and 3) reach your enemy's goal within 15 seconds.

On the clip above, Articuno is using Powder Snow which deals damage to a Pokemon in a straight area, but it widens to the end, resembling a fan.

When Articuno activates Freeze-Dry, the affected area will be covered in ice which deals damage to Pokemon near it.

When Articuno uses Ice Beam, it deals damage within a single line, but it is avoidable as there will be an indication that it will unleash the move.

Like, Freeze-Dry, when Articuno uses Blizzard, the surrounding will be covered in ice, but the actual damage is based on the hail it drops to the area of effect. Also, the area affected is smaller than the Freeze-Dry move.

There are several new Battle Items you can try using in this map! These Battle Items are in rotation and may change from time to time. Currently, the 2nd Set of Battle Items is available in the Snowbattle in Shiver City.