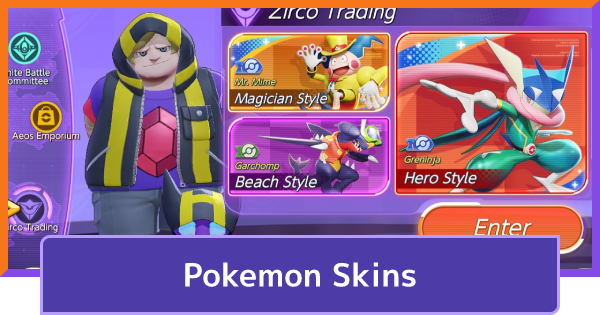 Latest News For The Upcoming Skins

Absol shows its competitive side with its new Pokebuki style. Get yours today at the Zirco Trading for 1200 Gems!

It is announced that the new Pokebui Style: Espeon is released along with Espeon's Unite license. You can also purchase now at the discounted price of 1539 Gems!

Get Ready To Sail Through The Ranks With Marine Style: Dragonite!

Dragonite is here yet again dressed in its newest Marine Style Holowear skin to take us in a voyage of a lifetime on its dreamboat! You can get this for a discounted price in the Zirco Trading shop until the 7th day of its release. After that, you'll be able to purchase it in its usual 2,199 Aeos Gems. So don't miss this week's chance and get it now!

Blissey's Pokebuki is now available for purchase in the Zirco Trading, get yours today!

Enjoy sakura themed Blastoise PokeBuki and Charizard Ninja style holowears included in this Season 7 Battle Pass! If you like Charizard or Blastoise, the Battle Pass is surely worth the price it since you'll acquire their unique, limited edition Holowears.

Battle Pass Season 7 - Price & Is It Worth It

Greninja is back for some action with its all new Wanderer Style! Greninja can be seen with a wooden hat and blue striped cape. Acquire this mysterious look for Greninja in the Zirco Trading Shop for 1,539 Aeos Gems.

Get Cinderace's Latest Pastel Style For A Limited Discount!

Get ready to hop into the spring festival as Cinderace is here is deliver goals in its new colorful pants with the latest Pastel Style added to its Holowear fashion. You can get it on Zirco Trading for an 840 Aeos Gem discount price from its regular amount of 1,200 Aeos Gems.

Get ready this Spring with the latest floral Holowear skin for this mystery Pokemon! We have a few guesses from the given silhoutte, which could be either the upcoming new Pokemon, Azumarill or Wigglytuff! Note that they both have elongated ears that resembles the hint. Whoever gets it, we are still excited to get a look at this new sunshiny look perfect for this season!

After Star Cloak, our marksman came back from the woods all dressed up with its brand new Theater Style! Decidueye can be seen wearing a glowing white cape with intricate designs. Its available for 1,050 Aeos Gems in the Zirco Trading Shop.

Get Your Dramatic Entrace With Alolan Ninetales' Theater Style!

Lit up any room..or Battle Arena when Alolan Ninetales walks in its bright red Theater Style Holowear! Quite a head turner with its dramatic hat and crimson dress which you can get for 1,050 Aeos Gems at the Zirco Trading.

Get Pastel Style Eldegoss On Discount !

Eldegoss gets ready for summer with its flowery Holowear design, Pastel Style! Its normal puffy cotton at the back is covered with flower designs including small flora designs in its cape. You can get it for 849 Aeos Gems in the Zirco Trading shop for a limited time.

Blissey Is The New Muse In Unite With Its Sacred Style Look!

Get inspired with Blissey's upcoming Sacred Style Look! Blissey can be see adorned with wreaths and gold. Its currently unavailable yet so you have more time to hoard gems for this skin in case it gets on sale in the Zirco Trading. Although, there's a chance it might be released it some event. One thing's for sure, Blissey looks absolutely divine in this fitting so don't pass it up!

When you get Battle Pass 6 "UNITE in the Spotlight," you'll get Theater Style Greninja for free! Greninja can be seen wearing an elaborate costume. This is a limited Battle Pass Reward so get your act together and get one now.

Adorned with gold rings, Lucario looks royally fit for battle with its ancient Ruins Style. This is not a pyramid scheme, you really can get this new Holowear skin in Zirco Trading for 2,199 Aeos Gems. Tiers to that!

Machamp look's like a big bad boy figure with its latest Punk Style look. It's really edgy... but only to a point. For only 1,050 Aeos Gems, you can purchase this baddie Holowear in Zirco Trading and rock your way to the Battle Arena!

Its everybody's dream to be an astrounaut, now is your chance with Cinderace's new holowear the space style, get yours today!

A Reporter's Work Is Never Done!

Get the latest scoop on your enemies to defeat them with Gengar's new holowear the reporter style. Get yours today!

Release you inner Hip-Hopper as you strike your cool Ice attacks with the Hip-Hop Style outfit for Mamoswine! The skin is now available at the Zirco trading for purchase. Get yours today!

Get The Gardening Style Through An Event!

Have you ever seen a Slowbro tending a garden? Well, now is your chance to see one! Obtain its outfit by doing the Cramorant's Daily Walk event and reaching all the way to the 12th Walk, get it before the event finishes.

The Diva Of The Frontier!

Wigglytuff is ready to perform on stage with its Frontier Style outfit which is now available at the Zirco trading. Get yours today and get the feel of fighting like a frontier from the olden days!

Snorlax Is Ready For Bed Time!

Everyone benefits from preparing for a good night's rest - especially if it's a big baby! Bedtime Style: Snorlax is now available today for purchase today at Zirco Trading, get yours today!

Tsareena gets a smokin new Frontier Style. Our savage vagabond is adorned with hats & boots that make heads at the saloon turn around. But do not underestimate this Wild West chic, Tsareena can burst its enemies down within seconds! Its now available at the Zirco Trading for 1,050 Aeos Gems.

Trainers can now collect Hearts to obtain the new Blissey's Sweet Style outfit to be claimed at the Event Exchange Center.

Gardevoir Can See The Future!

Experienced the power of the Sacred One: Gardevoir by purchasing its Sacred Style outfit at the Zirco Trading, available now!

Cook Style Pikachu Would Like To Take Your Order!

This chef is cooking up a most electrifying dish that could shock your enemies on their seats! Cook Style: Pikachu is now available for purchase at Zirco Trading, get yours today!

Be the fastest fish-slinger in the wild west with Cramorant's newest outfit the Frontier Style now available at Zirco Trading.

All Aboard The Trevenant Express

All aboard! Ever feel like working as a conductor during the western era, then here is your chance partner! Subway Style outfit is now available for purchase through Zirco Trading, get yours now today!

Cowboy Greedent Is Ready For A Showdown

This Greedent now has its Bullet Seed sights lock-on at you, so you better make haste and purchase its Frontier Style outfit now available at the Zirco Trading.

Be An Excavator Today!

Excavate you way to victory by earning this Excavation Style outfit for Machamp. Earn enough 500 Gold Badge and exchange at the Exchange Center.

Stick Em' Up! Zeraora's Frontier Style is now available and can only be obtained as well as the Gardening Style: Dragonite by purchasing the Season 5 Battle Pass and leveling it up.

Make your Garden beautiful with a big help, Gardening Style: Dragonite is now available and can only be obtained by purchasing the Season 5 Battle Pass and leveling it up.

Suit up and prepare to battle in style as the new Starry Night Blissey, Starry Night Crustle, and Armor Style Charizard skins have been released through the January 20th Update!

Festival Style: Pikachu is available again along with 2,022 Aeos Tickets and can be claimed until March 1st. Players who already claimed the skin will obtain 100 Aeos Coins instead.

※ Click or tap the icon to jump to detailed changes below.

Note: Captain Style Skin for Cinderace is now currently unavailable for players who failed to get this Season 1 Battle Pass 90th Reward during the time period.

Note : Festival and Hip-Hop Styles may not be available for other players who missed Season 1 and Pre-Registration Event

This special limited Holowear skins can only be acquired in a certain Event Period or from Seasonal Battle Pass.

So stay tuned for news on-going and upcoming events in Pokemon Unite so you'll never miss a chance to grab limited skins again!

Get in your Christmas Spirits with these Holiday Outfits for 400 Gems! (Pikachu's Holiday Style skin costs 2,499 Gems and is currently on sale at 1,749 Gems)

Adapt and conquer the battle arena with these outfits!

Get this very aesthetically pleasing style starting at 350 to 400 Gems or using 18 Holowear Tickets in some available Pokemon in Zirco Trading.

Note! Venusaur may be unavailable for players who missed the Season 1 Welcome Gift event.

Plaid skirts are the new trend in Pokemon Unite!

Reach for the stars with these Space Suits for 400 Gems in the Zirco Trading shop.

Pokemon With No Available Holowear Skins

What Are Pokemon Skins?

Holowear or skins change the way your Pokemon looks during the battle. They are purely for cosmetic purposes and do not provide any gameplay advantages whatsoever.

There are some skins that not only change the look of a Pokemon but also add special effects! This can include unique KO, movement, returning, scoring, and Unite Move animations!

How To Get Skins

Bought From The Shop

Holowear Tickets or Gems can be used to purchase Pokemon skins from the shop. You will need to unlock the Pokemon first before you can unlock a Pokemon's skin.

There are also skins that players can get by ranking up their premium Battle Pass. Note that you will need to buy the Battle Pass to get these rewards.

One of the possible rewards you can get from Energy Rewards is a Pokemon Skin! Energy rewards are random and these skins have the lowest rates of being pulled, unfortunately.