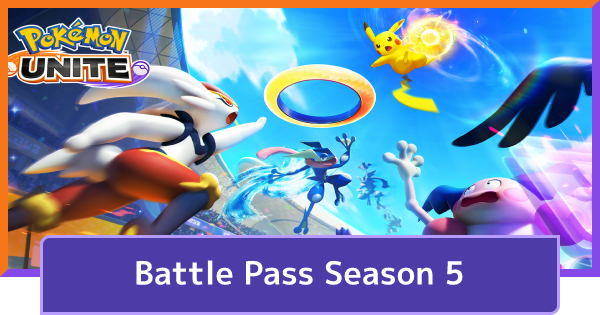 ▲Players can see the time remaining for the Battle Pass Seasonon the top-left corner of the screen.

The new Battle Pass Season 5 "New Sheriff In Town" has been released today January 31st with new outfits & Pokemon skins to obtain! Purchase the Premium Pass to get these exciting rewards! You can check out the previous Battle Pass Season 4 rewards below.

Start Date Is The Same With Ranked Match Season 3

Aside from the Battle Pass Season 5, Ranked Match Season 3 also starts on the same date. Ranked Season 3 has new rewards that can be received when reached a certain tier, check out the link below for more information about this.

Same as all Battle Pass. Battle Pass Season 5 rewards are time-limited and are set to be swapped after the remaining time ends. So make sure to obtain them before April 27, 2021 as they might not re-appear again.

Purchase the Premium Battle Pass Season 5 "New Sheriff In Town" and unlock Gardening Style: Dragonite to plant your enemies to the ground!

Buying the Premium Battle Pass will grant you a significant amount of Aeos Tickets. These tickets can be used to purchase Item Enhancers, which is crucial for upgrading your items. Note that you also get Item Enhancers from the Battle Pass as well, with the Premium version giving you a lot more.

How To Get Battle Pass Season 5

How To Purchase A Battle Pass

Aeos Gems Guide
How To Get & Prices

Complete Missions To Rank Up

The main way to increase your BP Level is by completing any available daily and weekly missions. These are timed so do them before they expire and are replaced by another set of challenges. See a list of missions ▼below.

Players Can Use Gems To Increase Level

Players can increase their BP Level by spending Gems. If you have enough gems, you can easily unlock tiers to get their items.

Battle Pass Overview & How To Unlock

Access to the Battle Pass can only be unlocked once you reach Trainer Level 5. You can increase your Battle Pass level using several methods to unlock more exclusive items. Furthermore, you can also get a Premium Battle Pass that allows you to get more items from the Battle Pass in exchange for Gems.

Pokemon Unite's Battle Pass has 60 tiers that reward the player with items per tier. Some tiers can be unlocked for free while others can only be accessed by buying a Premium Battle Pass.

How To Increase Battle Pass Level

Note that the following items above can only be done within a specific time frame. Once you complete a mission, you have to manually claim them to advance your Battle Pass. If you want to quickly increase your Battle Pass level, try to complete all missions as soon as you can!

Similar to other Battle Passes, the Battle Pass in Pokemon Unite requires players to increase their BP Level to unlock different items & cosmetic skins. Purchasing a Battle Pass will let you get extra rewards every time you gain a level.

There are a total of 60 BP Levels each with its own item to unlock. Every time a player reaches a level, they can claim the corresponding item to that level. Note that you need to have a Premium Battle Pass to get all of the rewards!

Get Chest Rewards After Maxing Out

Even after you max out your Battle Pass level for the season, you'll be able to get rewards. Every 130 points you earn will get you one gift box. You can store a maximum of 21 of these boxes at a single time.

Items from the Battle Pass gift chests will drop at the rates outlined above. This will be a good way of getting tickets to purchase cosmetic skins for your Pokemon and yourself!

Is It Worth It - Should You Buy The Battle Pass?

Is Premium Battle Pass Worth Buying?

If you want to earn more Aeos Tickets and Item Enhancers, purchasing the Premium Battle Pass will be worth your while. Buying it will give you a massive 2400 Aeos Ticket and 90 Item Enhancer advantage over players who don't.

Aeos Tickets and Item Enhancers can be used to upgrade your items for better effects when used in the battlefield. If you have the cash to spare, we recommend purchasing the battle pass.

※ Take note that Daily Mission objectives change daily - the ones listed below are merely examples.

※ Take note that Weekly Mission Rewards may change each week, so stay tuned for updates!