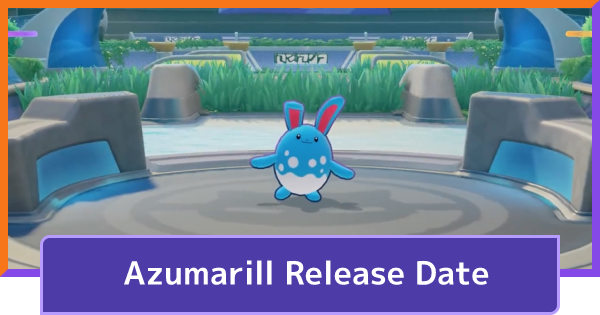 The newest character in Pokemon Unite Azumarill has a release date of April 7, 2022! Don't let this new Pokemon's cute appearance fool you as we're sure it's bound to pack a punch as one of the Unite arena's All Rounders! Given its type, we're confident that it's going to have balanced stats that make it a very versatile contender in the game. Check out the details below for more info on this awesome new Pokemon!

Azumarill's Unite License costs 10,000 Aeos Coins or 575 Aeos Gems. Get the License to be able to play Azumarill in Ranked Matches in the Pokemon Unite Battle Arena!

Azumarill Is An All-Rounder Type Pokemon

Azumarill as an All Rounder is bound to have a good balance of stats that will enable it to play several types of roles in the battlefield. You can optimize your build based on which stats you want to strengthen and take it from there!

May Specialize In 1v1

Do not underestimate this bunny-looking Pokemon because it will barrage you with its watery moves in a matter of seconds! Aside from that, Azumarill may have the ability to penalize overly aggressive defensive play, so keep an eye on your back.

During the first clip on the release video, we can see that Azumarill beats Ludicolo and knock it out in just three whips! Seems that our little blue bob can take on the mid lane and fight against the enemy Jungler in the area.

This particular move might remind you of Venusaur's similar AoE, Petal Dance. Azumarill creates 4 mini Whirpools revolving around it in a circular motion. Enemies that try to get near and are caught within its area of effect seems to take considerable damage. This could potentially be deadly against opposing melee Pokemon and also helpful when fleeing from pursuers, should it also include some other time-limited stat increase.

It looks like Azumarill gets a bursts of stars around it after rushing in at its opponent which might be Tackle, a move typically utilized by Defender types like Snorlax . If this is the case, Azumarill will be the first All-Arounder in the Arena to be able to use this technique.

Looks like Tsareena is not the only one that can kick its way to the lanes. Azumarill seems to have a kicking move that swipes to the side. It also has a potential to knock out Ludicolo in three hits. Better watch out for its bunny kick, this kind of move may have the potential to damage several enemies at once!

One move has Azumarill jumping up and somersaulting before landing its kicking move on its pitiful target. Its sort of a Tsareena-like version of Submission only different. You can also notice that it has a linear, narrow area of effect as well that may be comparable to Sacred Sword, a move which only Aegislash can wield.

Azumarill's Unite Move looks to be a splashy explosion leading to a powerful jump toward its enemies! It's looking to have a wide AoE and may be a good choice to fight off stacks of Pokemon! Its seems it can lock-in the direction of the move to its target much like an amplified version of Shadow Ball and Tsareena's Stomp so it can be a Sure Hit kind-of-move you can use to knock out enemies even if their health is still halfway. Take note that it does seem to have a short startup so its effects may be delayed.

What Kind Of Pokemon Is Azumarill?

Azumarill resembles a rabbit with its elongated ears introduced in Generation II as a pure Water type Pokemon and was later added as a Fairy type as well. It dwells in rivers and lakes and may stay submerged all day. When it fights or is agitated, the tip of its tail glows.

Here's an overview of Azumarill's evolution based on its previous appearances and history.

Since Azumarill only evolves once to get its Final Form, it may have an earlier evolution compared to other Pokemon. This being said, it may have the upper hand on the early stages which it can use to farm Exp fast and unlock its more damage-dealing moves.

It is not yet formally announced on whether Azumarill will have its own Holowear when it is released. However, there has been teaser that a Pokemon in the lineup may get a new Spring design, which may be Azumarill or Wigglytuff due to their uncanny resemblance especially in their ears! Make sure to check back for any news on this.

How much will azumarill cost?