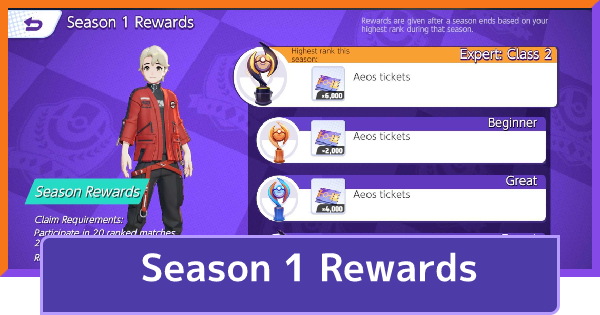 Check out the season 1 rewards for Pokemon Unite (Pokemon MOBA). Find out the ranked rewards, season reward outfit, Work Set, how to get, when you can obtain, & season 1 end date.

What Are Season Rewards?

Rewards Given According To Rank

Season Rewards are awarded to you depending on the rank you achieve in a previous season. There are two types of season rewards: those which are obtained at the end of a season based on your final rank, and those which can be obtained during a season by meeting certain requirements.

How To Check Seasonal Rewards

The first season reward for ranked matches is the Work Set. This set can be obtained at any time, not just at the end of the season! You will have to meet the following two requirements to get it, however.

Requirements To Get The Work Set

The second type of season reward for ranked matches is Aeos Tickets. These are only obtainable after the season ends. The amount of Tickets you receive will vary according to the highest rank you were able to attain! Aeos Tickets can be used in shops to buy a variety of useful items, such as the Item Enhancers.

When Does Season 1 End?

First Half Ends On September 22nd

The first half of Pokemon Unite's first season is set to end on September 22nd, alongside the game's Mobile release. This date brings with it significant balance changes and even some new items.

Note that it's likely we won't be receiving ranked rewards until the second half of the season ends. Assuming the second half lasts as long as the current Battle Pass, it's possible the first season could end on November 8, 2021. This is not a set date, however.