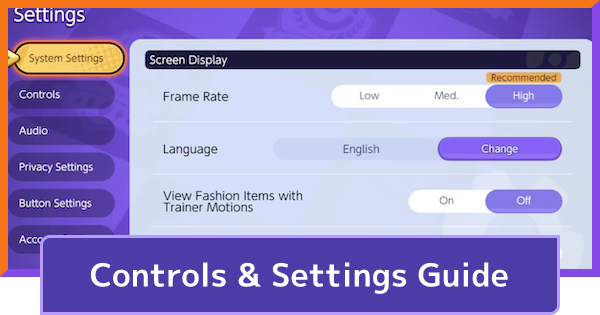 Settings for both versions of Pokemon Unite are more or less the same. The only big difference between them is the control scheme. Even so, the way you can modify the controls are somewhat similar.

High Framerate Is The Best

You should set the frame rate to High. The goal here is to smoothly see each player's movements. Higher framerates can also be easy on the eyes, allowing you to perform quicker moves & actions! Note that this setting will consume a lot more power.

Turn Off The Vibration

We recommend you leave most system settings set to "on". However, we recommend you turn off the vibration function, as it could cause you to accidentally press the wrong button at times.

Keep Your Voice Chat On

Text Chat Should Be On Too

If there's an instance where you can't use your microphone, then you can always use the Text Chat to communicate with your team.

Setting your Attack Targets to advance modes will let you choose to attack Enemy Pokemon or Wild Pokemon. This can be done with the addition of another button that you can press to attack Wild Pokemon. This will prevent mistargeting when fighting near crowds of Wild Pokémons.

Choose The Attack Direction Manually According To The Battle

For the Nintendo Switch, the normal attack and ability direction can be manually selected by tilting the right control stick to the right direction. This is known as the "Lock-on" feature, and we strongly recommend getting used to it, as it will let you target specific foes in more chaotic teamfights.

List Of Settings That Automatically Adjust The Attack Direction

Basic Attack Is Recommended To Be Done Manually

When the basic attack is turned to auto, there is a chance that unintentional attacks will occur when you don't want to attack. This is especially true when you are hiding in the grass. We recommended having Automatic Basic Attacks set to manual.

Make It Easier To Know What Attack You’re On

If you do 3 normal attacks in a row, the 3rd will be a powered-up attack. If you turn on the display of powerful attacks, it will be easier for you to know which attack you're currently on.

For the mobile version, the recommended setting is Slide away. The default requires you to move your finger far up to cancel moves. The Slide away option is faster and more intuitive than the default one. For the Switch version, a button press while aiming simply cancels the move.

How To Cancel Abilities & Moves

This setting moves the reticle towards direction where your Pokemon is looking at. This can be extremely useful with Dash moves as placement may determine the success or failure of your skill. Also, note that this settings varies depending on the move and some moves may not be affected.

What Is Move Aim Snaps To Nearby Targets?

This setting snaps moves to a certain target. It can be pretty helpful if used with very mobile Pokemon as the targeting reticle remains locked-on even while in motion.

In the Nintendo Switch Version, set "Move Learning Controls" to "Single Button" to easily access new skills once you unlock them. This can be pretty useful if you find yourself unlocking new moves during a fight.

Keybinds Can Be Changed

If you do not want to use the default controls for Pokemon Unite, you can change each action's button setting. You can do this by navigating to the Button Settings menu and choosing the action or button that you want to alter.

You can slide the left D-pad to control your Pokemon's movement. You can adjust the settings for the sensitivity of this directional button.

Moves & Items On The Right

Most of the actions that you can make are located at the lower-right hand side of the screen. Normal attack occupies the largest space with the Pokemon's unique moves surrounding it.