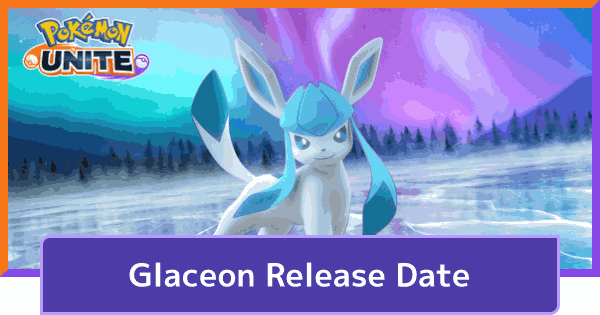 Glaceon release date is on July 21! Glaceon is a new character in Pokemon Unite (MOBA) for the Nintendo Switch, Android, & iOS! Learn the release time & all info on Glaceon so far!

Glaceon Is Here To Freeze Enemies In Unite! (New!)

Get ready to get frozen as Glaceon ice skate its way to the Unite Battle Arena! Don't get deceived by this Fresh Snow Pokemon appearance because its more formidable than it looks like with its arsenal of ice crystals and hailstones.

With its latest addition, the attacker-type roster continues to grow and will undoubtedly benefit from its Ranged-Type capabilities. Would it be able to rise above the current Meta? Check out our guides below to know more about Glaceon's icy prowess and how to use them against your foes.

One of Glaceon's move involves launching concentrated icy orbs of energy towards its target. When hit, a small freezing AoE appears beneath its target which might also have a slowing effect thus reducing the movement speed of its opponent and decelerating its counterattacks in the process.

Similar to Sylveon's Mystical Fire, Icicle Spear rapidly fires all of Glaceon's stored ice crystals towards an opponent Pokemon, shattering and dealing damage in the area of impact. This move's ice crystals do increase damage each time they hit the same opposing Pokemon!

Glacial Stage sends Glaceon into midair, forming an ice zone in front of it that slows and damages opponent Pokemon trapped in its path. Glaceon's movement speed increases while in the zone, and it acquires ice crystals over time!

What Kind Of Pokemon Is Glaceon?

Glaceon is one of the eight evolutionary forms of Eevee and is known to be an iced-type Pokemon introduced in Generation IV. Glaceon is able to freeze its surroundings and form ice crystals it uses as projectiles against its enemies.

You can style Glaceon in either Orange & Purple Unite Style once you get its Unite License. Make sure to get it if you want to stand out from the battle arena.