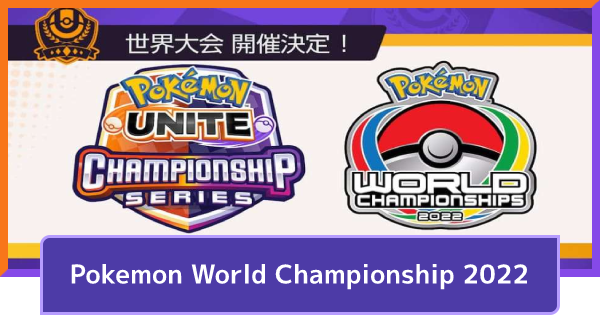 Not only you can watch your favorite Unite Squads in Youtube but now you can also watch them in the upcoming battles in this March on Twitch! Aside from this, language support will also be provided on each different regions.

Expect that the Pokemon UNITE Esports community gets more competitive this year with the World Championship 2022! After seeing some action and amazing talents from the last Winter Tournament in Japan, we are excited to see what players from the rest of the world can show in the Battle Arena as we are about to partake in the biggest tournament yet in Pokemon UNITE!

Open To Everyone Worldwide!

The Pokemon UNITE pro players and enthusiasts should rejoice as the producers are now planning to make upcoming Pokemon UNITE tournaments available for everyone even including plans to add new languages to support.

In some cases, players from some regions/countries must be 18 to participate.

Each Pokemon UNITE Tournament Series event will have open registration on Battlefy, so make sure that your team have signed up on the biggest competition this year!

Register Your Team ( For Team Captains)

The World Championship team bracket will come from the qualifying winners from the following tournament challenges under this year's 2022 Tournament Series:

Once the Team Roster is completed by this June, all the Qualifying Teams for this World Championship Tournament

Galaxy Team won the first World Championship tournament in February. One of the team's member, Firefly Noken, was commended for his invaluable aid to his squad and his knowledge in using various Pokemon. You can see how well-timed adn executed his moves are in the tournament highlights below.

It's officially announced that a whopping 1 Million USD in prizes, including 500,000 USD at the World Championships prize pool will be up for grabs in this year's Pokemon UNITE World Tournament.