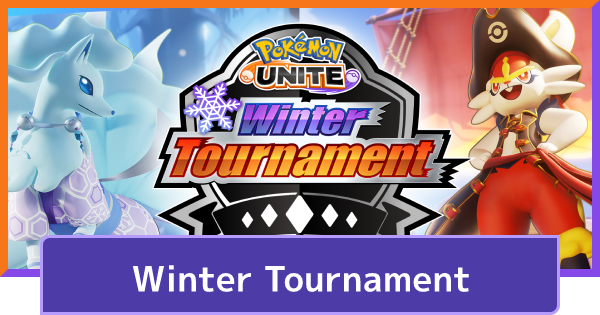 The first-ever Winter Tournament in Pokemon UNITE is sponsored by JCG with the cooperation of Pokemon Co., Ltd, and is held in Japan that started from December 2021 and finished this March 2022.

Support your favorite teams by tweeting their Squad hashtags and you might just be one of the lucky giveaway winners. All participants will be able to join the raffle will have a chance to get their favorite teams Hoodie from the Winter Tournament Final.

During the action-packed weekend this first week of March, the top 8 teams battled it all out in the UNITE Arena. The Finals came down with the two teams; Galaxy Cluster versus Aeos Fortis Reges. In an unprecedented turn of events, Team Galaxy Cluster was able to turn the tables in their side and won the Final Round, making them the over-all winner and Champion for this Winter Tournament Event.

Team Aeos Fortis Regis emerged as the 3rd Winner Tournament Champion following its two straight victories in the A and B blocks, which were held on separate days. this February.

Galaxy Cluster was able to snatch the top spot in the second Winter Tournament Challenge during A and B blocks which were held last January.

Wigglytuff Will Roll Forever was awarded as the 1st Winter Tournament Winner after its consecutive wins from the A & B block held on separate days.

Here's a sneak peak on what happened during the fierce competition between the teams featuring the best game plays from players participating in the first-ever Winter Tournament!

There has been no official announcement regarding the prize pool for the Winter Tournament yet although it is possible that it was disclosed only to the participants during the competition.

▲ Jump back up to the top