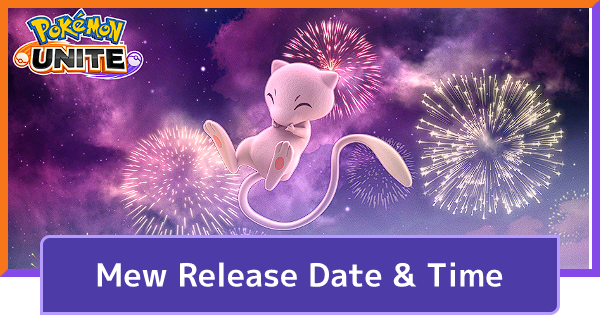 Mew release date is on May! Mew is an upcoming character in Pokemon Unite (MOBA) for the Nintendo Switch, Android, & iOS. Learn the price, cost, moveset, stats & role of Mew!

Mew Is Coming To Pokemon Unite!

Mew is the latest upcoming ranged attacker joining the ever growing Pokemon roster in UNITE on September 2. This pink bipedal mythical pokemon is set to appear on the Unite Battle Arena along with new tricks and more learnable moves than any other Pokemon in the current lineup. It is said that it can forget and relearn moves during the battle to surprise opponents so we are excited to see what Mew can do on the battlefield!

Teased At The Continuation Of The 1st Anniversary Celebration

Mew was officially introduced in the Pokemon UNITE anniversary phase 2 announcement trailer along with Dodrio and Scizor.

How To Get Mew

Mew is said to be a ranged attacker and may also specialize on Special Attacks looking at the sneal peek on its moveset from the trailer.

Mew can hurl electrified orbs at opponents that can cause damage and briefly stun them. The lower an opponent's health, the more damage is inflicted.

Mew may be able to learn moves from other Pokemon and use it against them! So if you like playing different Pokemon you'll surely have fun with this.

Aside from range attacks, it seems that Mew can appreantly do multiple moves and may overlap them at the same time. In the trailer, Mew can be seen to create a barrier to prevent its lane opponent from getting near then proceed to blast it with a ranged beam similar to Venusaur's Solar Beam that you can use to snipe down fleeing enemies or steal the last hit on objectives.

Mew's Unite Move has been recently unveiled to be Mystical Mirage which has a large area of effect and looks promising especially for the Zapdos fight. Mew become invinsible and so does its allies within the area of effect, providing stealth so that they also does not take any damage during the whole time. After the duration of the move, as Mew re-emerges it sends out a huge blast to opponents caught within the field.

What Kind Of Pokemon Is Mew?

Mew is not known to evolve into or from any other Pokemon. So its possible that similarly like Pikachu, it may do particularly well during the early stages of the game.

Mew is supposed to possess the DNA of every Pokemon in its body, allowing Mew to learn and utilize any attack. This ability will surely be quite useful against opponents in the battle arena.

A trailer shows mew clothed in a costume donned in red and green so it might have a ready holowear skin available upon its release as well.