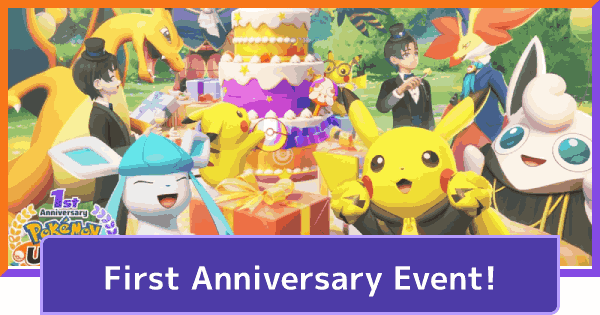 When Is Unite's 1st Anniversary?

Glaceon Gets Orange & Purple Unite Style Holowares Along With Its Release!

Glaceon's Unite License release comes along with the Orange & Purple Unite Style Holowares. If you like Glaceon, you can get it in Zirco Trading and style it up.

The Anniversary Cake Challenge is an event where you can clear missions and collect frosting by logging in or in battle. Collect lots of frosting to complete the cake and get rewards such as Crustle and Cramorant's exclusive Holloware.

Boss Rush Challenge is a new game mode map for Quick Battles. With the support of teammates, try to rapidly KO formidable Pokemon like Zapdos and Avalugg that will frequently respawn in the map. It's a point-based challenge so each Unite Squad will be ranked accordingly; the higher the Unite Squad's score, the greater the rewards.

The Friend Invitation Campaign is a campaign where you can get rewards by inviting your friends to Pokemon Unite. Invited friends can get a random box rewards which you can get free Holoware Tickets, Energy Boost Tanks, etc. Invited parties can get Bonfire Style: Slowbro as a reward.

Earn points by teaming up with trainers who haven't logged in for more than 14 days during the Event Period. Limited-license boxes (7 days) etc. can be obtained according to the points earned.

The following holowear mentioned above will be returning in the Zirco Trading again at it will be available for a discounted price for a limited time If you didn't obtain these holowears previously, this is a great chance to do so.

Team Up & Rank Up

During the Event Period, you can earn additional active points by teaming up and playing ranked matches. Raise your rank efficiently with your friends!

During the Event Period, each time you log in, you can get a Unite license and a set of holowear for up to 5 days. In addition,all corresponding Unite licenses and holowear will be converted to 100 Aeos coins if you have already owned them.

Battle Pass Season 9's featured rewards are Band Style: Pikachu and Songstress Style: Wigglytuff! In addition, BP special tickets have been included in the rewards and battle pass gifts this season. BP Special Tickets can be exchanged for limited edition Holowear fashion for Season 1 and 2.

This upcoming Pokemon Energy Emblems are a new feature in Unite that can enhance the status of your Pokemon before the match starts. It will be available through Energy Rewards starting Thursday, July 21. In addition, after the implementation, you will be able to pull an Energy Reward once every day for free.

Energy Rewards - Limit & How To Get

The reward for reaching expert rank this season is Tuxedo Style: Decidueye. Starting this season, the Event Period will be reduced to around 1.5 months, however the rank reset range will also be changed. In addition, the numbers for each rank have been adjusted such as the lower the number, the higher the rank.

Pokemon Unite 1st Year Record is a feature that allows you to see your previous year's match results records. You can also check the Pokemon that has been used most often and its cumulative score. This feature can be located in the Aniversary Plaza.

How To MVP & Score Calculation

Purchase the 7-Day Login Bonus Pack for 60 Aeos Gems to unlock and start the daily login mission. By completing the missions, you can obtain holowear select boxes, holowear tickets, energy boost tanks, and other items. Take note that the rewards for the first and second missions are the same.

Jump Back To Top