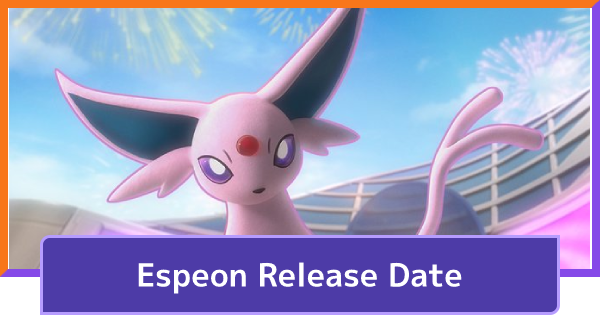 Espeon can now be taken into battle in the Unite Arena with its latest arrival along with this May 16 Balance Patch Update. Get to use Espeon's psychic abilities and blasts enemies through the lanes. Will this new magical creature be able to beat the odds on the current Meta? Learn more about Espeon's powers and how to use them with our guides below!

Espeon's appearance was first teased with the publication of the Pokébuki battle pass with an Eevee image, and claims of an upcoming exciting competition in the future.

Espeon is confirmed to be a Ranged Attacker. Since it also evolves from Eevee, it may be similar to Sylveon. Its highly likely that it might be a Special Attacker as well. Stay tuned for the updates for its release.

Its possible that Espeon will take charge of dealing the most of the damage to opponents with its long-ranged beams to push lanes and snipe down team objectives.

Like any other carries, Espeon may pair well with tanky Pokemon who can soak up damage in the front lines in either the Top or Bottom lanes. This way you'll be able to ensure its survivability and extend its battle time to be able to wreck havoc in the arena.

You Can Get Espeon For Free!

You can get Espeon's Unite License for free on its upcoming event similar to Hoopa. Espeon's Unite license will appear at the Unite Battle Comitteeat the same time as the event starts, but it can only be purchased with gems. After the event, you can also purchase with 10,000 Aeos coin.

Can Shoot Lasers With PsyBeam!

Psybeam is a concentrated magical laser beam that splits into tiny rays when it comes into contact with an opponent.The damage caused by these rays is proportional to the maximum HP of the first Pokemon hit, so you can go for the toughest Pokemon possible to deal the maximum damage!

It has been revealed that Espeon second move is Psyshock. Wth this move, Espeon can shoot 5 five purple orbs in a specified direction. It has a decent enough range and area to be able to target multiple targets at once. Pikachu who got hit seems to get stunned as well. A concentrated blasts also follows up dealing concentrated damage that seems to be quite a finishing move to unfortunate targets.

Espeon has the ability to shoot dazzling beams at its enemy. This onslaught of attacks comes out of nowhere and has a large area of effect, allowing it to inflict damage on numerous opponents in close proximity.

Locks In Enemies With Energy Bubble

Espeon can burst down enemies when trapped in its psychic bubble. This purple orb absorbs damage over time while also stunning its target in place as Espeon follows it up with a barrage of starry attacks. This could be great in close combat situations and might be useful in isolating key players during team battles.

There's likely a coincidence that Sylveon and Espeon may have some of the same movesets due to their uncanny similarities with each other.

Psychic Solare enables Espeon to suspend its unfortunate targets into thin air. Espeon then gets its enemies energies and turn it into damage as it flips it back. This can be a good finishing move to defeat opponents in 1v1 situations.

What Kind Of Pokemon Is Espeon?

Espeon is a Sun Pokemon type as it can predict the weather or the opponent's next move by reading the air currents, which ise useful for any matches.

The gem on Espeon's forehead lights as psychic energy is released from the gem and darkens when all of the stored energy is depleted. The gem boosts the psychic powers that it gained to protect its Trainer from harm.

Espeon is incredibly devoted to their Trainer and use their Psychic skills to keep them safe.

Espeon can reflect some moves back to the opponent like a double-edged sword with Magic Bounce.

It's officially confirmed that Espeon will have a new cherry blossom-inspired yukata holowear skin upon its release. This includes gold and red headwear and some tail ornaments

All Pokemon Skins & Holowear List - Price & How To Unlock