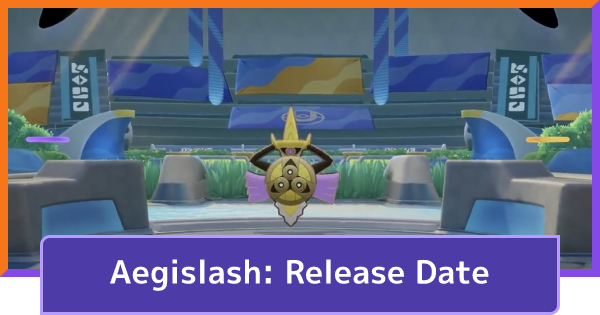 Aegislash Has Come To Pokemon Unite!

Pokemon Unite welcomed a very strikingly sharp looking new Pokemon in the February 11 Update: Aegislash! With its shield and sword in tow, it's looking to be both able to defend itself and strike quite powerfully at any foe that dares to fight it. With this interesting balance of qualities, we're not surprised that it's now officially Pokemon Unite's newest All-Rounder!

Aegislash is priced at 10,000 Coins or 575 Gems at the shop! Slice your enemy with all your might and shield yourself with this newest Pokemon by purchasing its Unite License!

Aegislash Is An All-Rounder

Despite Aegislash looking like a mighty tanky foe, its slashing and possibly high damage attacks make it a really great All-Rounder Pokemon to join the Unite Roster!

Enemies should be careful not to get too close to this new melee all-rounder as Aegislash is packed with its razor sharp swords and shields to rip apart anyone who stands on its way.

Aegislash gets to have the center as its default lane, the first among the All-Rounder roster.  Aegislash can take advantage of this by farming Wild Pokemon in the region to level up quickly and unlock its moveset before the team objectives appear. Aegislash can use Bouffalant and Ludicolo's buffs to play an active role when taking out Boss Pokemon, enabling their team to seal their victory.

*This section is based on the official trailer of Aegislash. There is no official announcement of its moves as of writing. Stay tuned for updates!

Aegislash moves and gameplay were revealed in the latest update from Japan! We can get a glimpse of Aegislash potential in the Battle Arena with useful commentaries from the guest speakers throughout the the 7-Minute long Youtube video. You can also see a sneak peak on the builds and possible movesets you can use with Aegislash.

It may transform into a Shield Form to block attacks while restoring its HP, or a Sword Form in which it can use to boosts its damage output. You can use this to go from aggressive to defensive position or vice versa.

Unlike other Pokemon that gets their attacks boosted from normal attacks, Aegislash stacks its boosts whenever its moves is used and hit a target. Build the gauge up to at least 2 bars and you can continually attack your opponent. To do this, attack wild Pokemon first before ganking targets.

A Shield To Block And Control Crowds

Aegislash has a move that appears to be a shield that can possibly both protect itself from damage and also control crowds much like Snorlax's Block. Just how much this shield can protect and push other Pokemon has yet to be known, but it's looking to give enough tankiness to make this new Pokemon a hardy one in the battlefield.

Aegislash, living up to its name, seems to possess a move that highlights the area in front of it in a sword shape. From the looks of it, all Pokemon caught in this area are bound to be hit by a powerful move, so foes better watch out! It looks to be a great way of getting more control of where to hit its moves as well.

When Aegislash uses its sword, it looks to be so powerful that it sends enemies flying high up into the air! This is looking to be a really great crowd-controlling attack as it not only disrupts enemy movement it it also shoves them at a pretty good distance. Use it to prevent foes from getting objectives like Drednaw & Zapdos!

Aegislash looks to have a move that lets it focus on specific targets in a straight line - much like a laser beam! This is great for taking specific objectives in a pinch as it seems laser focused on the pitiful targets in its line of attack. It may need some degree of target practicing though, but if aimed well, we can see how it can definitely turn the tables around in a very tight battle!

What seems to look like Aegislash's Unite Move is a powerful downward sword smash which could deal a deadly blow to any Pokemon unfortunate enough to be right under its AoE. This move in particular may be great at stealing objectives and may be especially useful when several Pokemon are stacked all together in a concentrated area.

This section has basic tips and tricks that you must know to effectively control Aegislash. Treat this as a supplement to the Beginner's Guide.

To be more effective in battle, we can focus on enhancing Aegislash's abilities and strengths with Battle Items and Held Items. As an All-Rounder Pokemon, Aegislash is bound to have balanced stats that makes it versatile in any situations. This may be enhanced depending on whether you'd prefer to play more of an offensive role or defensive role.

If you prefer a more tanky Aegislash build, we recommend taking a look at Dragonite's builds to get a good idea of which items to maximize its defense.

If you prefer a more offensive Aegislash build, then look no further than Tsareena's builds to find items that will best utilize its sword-smashing prowess.

What Kind Of Pokemon Is Aegislash?

Here's an overview of Aegislash's evolution based on its previous appearances and history. It evolves twice before it reaches its final form like other Pokemon on the roster. Given its evolutions, we can assume that Aegislash may become a dominant All-Rounder to use during the middle & final stages of the match.

Aegislash is a Steel/Ghost Type Pokemon introduced in Generation 6. It also has a Shield Forme to guard against any attacks and Sword Forme to slash opponents with - a unique aspect that we haven't seen in the Pokemon Unite roster just yet!

When in Shield Forme, Aegislash can defend against any upcoming attacks by using its steel body to decrease the damage taken. Its Sword Forme is dedicated to slashing its opponents. It is possible to see Aegislash use these 2 Formes in Pokemon Unite to act as a Defender or an Attacker, making it a very versatile All-Rounder!

There is currently no official statement or update on whether Aegislash will include a new Holowear in its expected release this week. With the consistent new content updates in Pokemon UNITE, we're quite certain that Aegislash will have its own Holowear skin in the future so stay tuned for further information or news in regards to this!